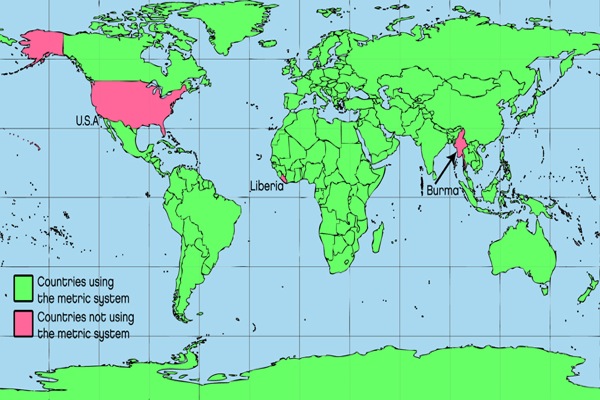 What sets the U.S apart from the rest of the world?

The U.S. is one of only three nations in the world (the other two being Liberia and Burma) which clings to its outmoded system of measurement, failing to get on board with the rest of the world and use the metric system.

What does this mean for you as an American? It means that when you travel you look like an idiot. When someone asks you for directions, you are suddenly at a loss, unable to estimate distance in kilometers. If one of your South American friends asks you how cold it is, you have no idea what to say. Is 30 degrees hot? Is it cold?

There are more communist countries than there are countries not using the metric system. Everyone else has come to the conclusion that it just makes for sense to use the system everyone else in the world is using in which all units are divisible by ten.

OK. Maybe it wouldn’t be cost effective to tear down all those mile markers, but just imagine the jobs it would create to start adding kilometer markers to every highway in the U.S. of A.