Author Henry Miller once said, “The light of Greece opened my eyes, penetrated my pores, expanded my whole being,” a sentiment I can largely echo. I’ve been visiting Greece since I was a child, and worked in Athens from 2008 to 2010 — pivotal years in which the world saw the city marked by demonstrations, corruption, and austerity measures.

I continue to return to Athens annually, and despite its economic struggles, I still believe it to be a city of great light. It was with this in mind that I decided to photograph one of my days around the city: good, bad, and everything in between. 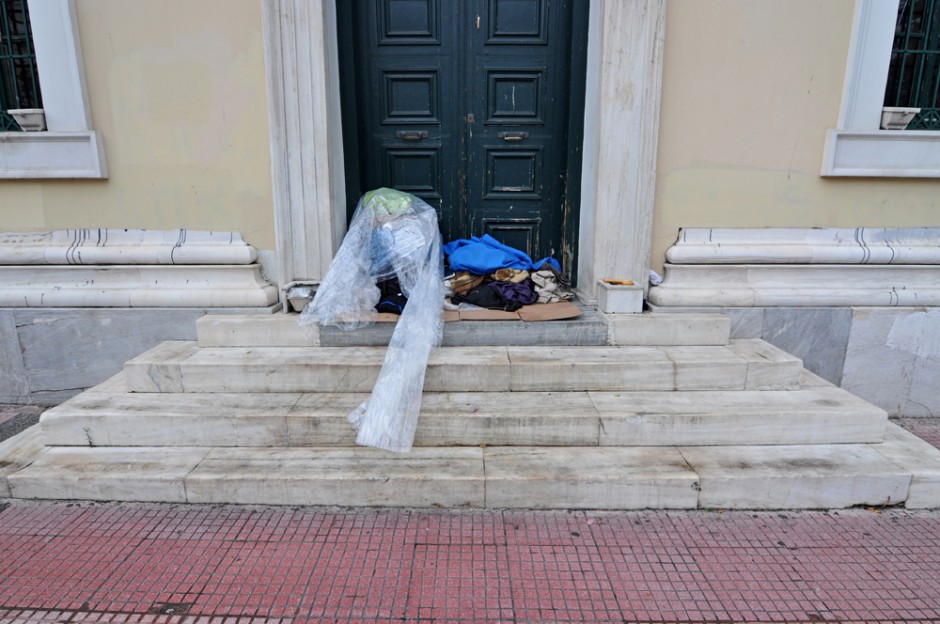 A homeless person leaves their belongings unattended to sway in the breeze on Akadimias Street, a major roadway in the center of Athens. The number of homeless people in Greece has more than doubled since 2009. “It’s one of the city’s top social problems,” a 32-year-old engineer in the city told me. 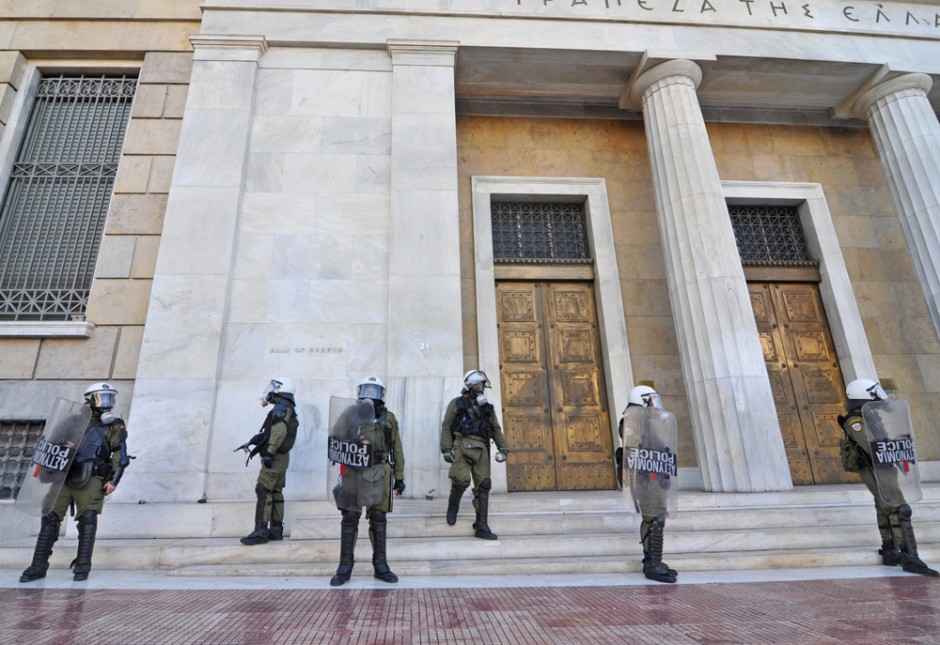 Riot police prepare to mobilize during demonstrations in memory of Alexis Grigoropoulos, who was 15 when he was fatally shot by police on Dec. 6, 2008. Many feel that Grigoropoulos’ death was a tipping point for the country, as it sparked thousands of demonstrations that have now become routine in the Greek capital. I followed the march down Panepistimiou Street—where I snapped this photo—but left once police began firing tear gas. 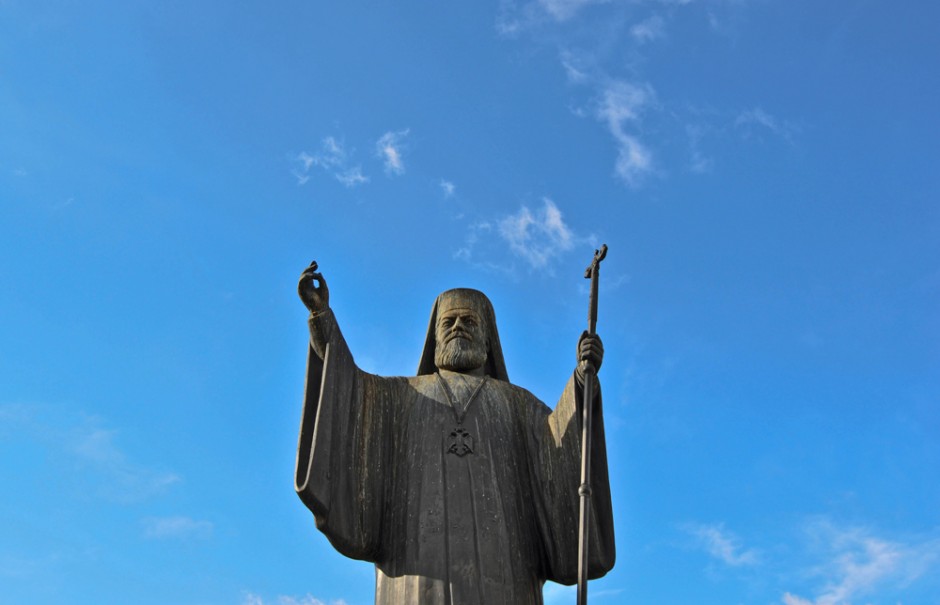 A statue of an Orthodox priest looms over the square in front of the Metropolitan Cathedral of Athens—the cathedral church of the Archbishop of Athens and all of Greece. I thought it was kind of symbolic. In Greece, the separation of church and state seems to be unthinkable: 98% of the country’s population is Greek Orthodox; yet scandals continue to plague the church, and salaries for priests and bishops cost taxpayers more than 200 million euros a year. 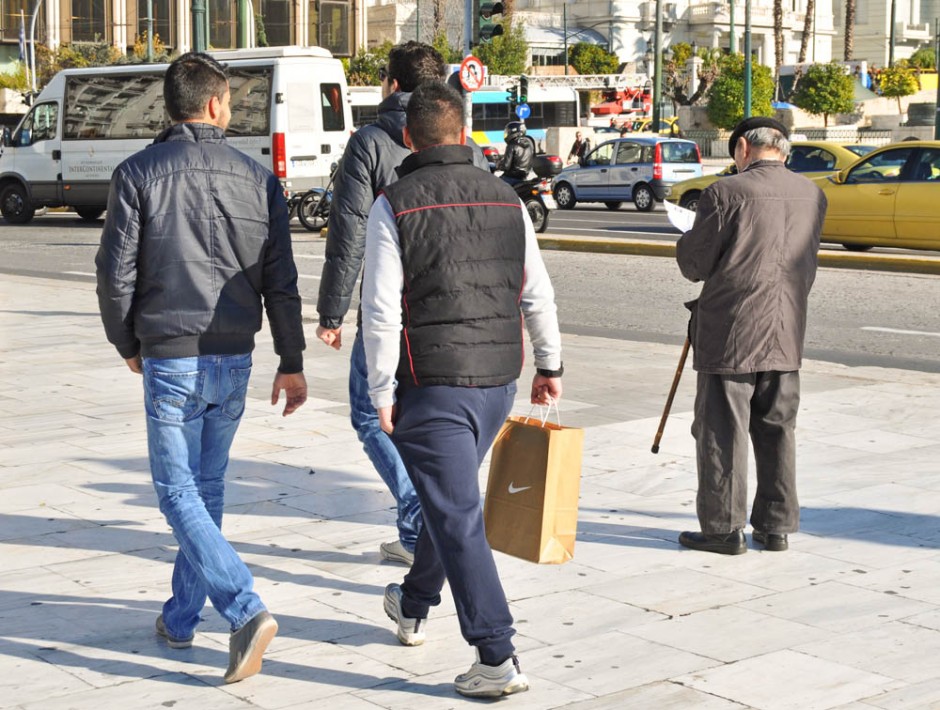 Young Greek men pass by an older man near Athens’ central Syntagma Square. Astonishingly, approximately 57% of Greek youths are unemployed. “A lot of young people are leaving and going abroad because of a lack of opportunity,” an unemployed 24-year-old schoolteacher told me. “They can do so many things, but they aren’t being helped here.” 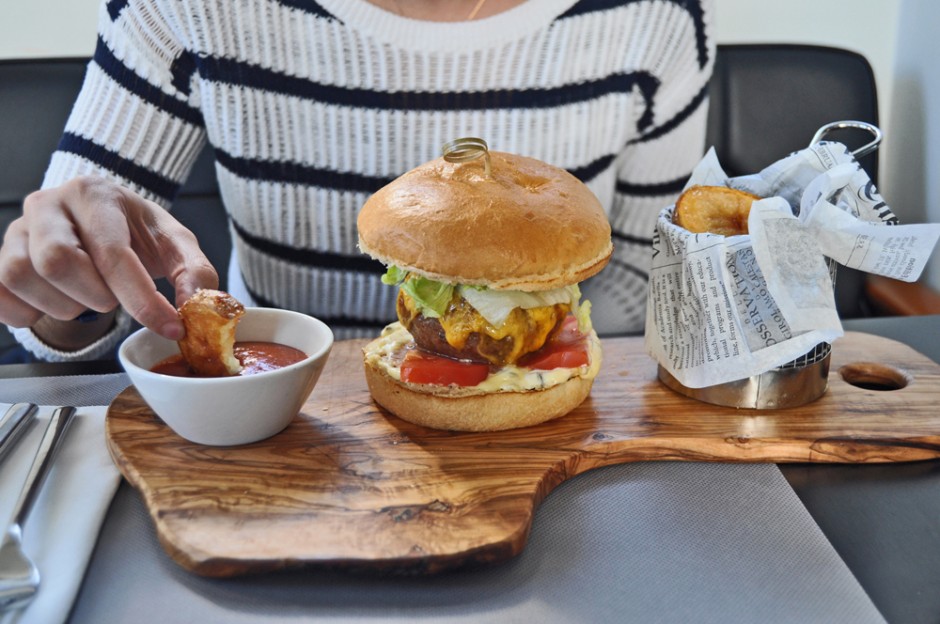 A locally sourced organic cheeseburger and potato wedges are a popular choice at The Dalliance House, a bar/café/restaurant in Kifisia, Athens. Greek businesses have refocused efforts on local production in order to help the economy. “Greek products are becoming more popular than ever before, and bars seem to realize this better than other businesses,” a Greek citizen told me. 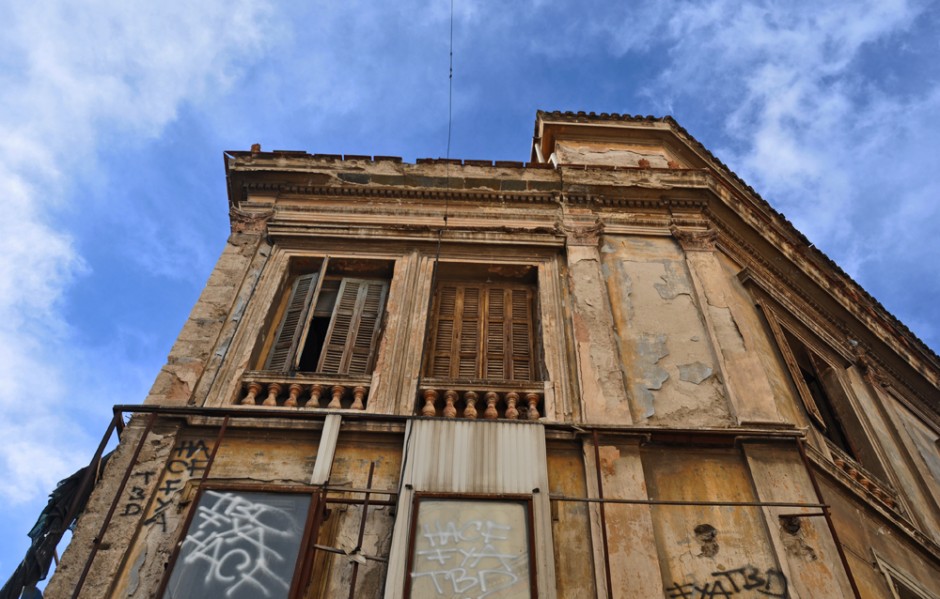 When walking around the Monastiraki district in Athens, I make it a point to find this building, which has been a favorite of mine for many years. Though renovation was started on it at one point—look closely to see evidence—all efforts have seemingly ceased. I later found out from friends that this is not uncommon, and that renovation on many traditional buildings has been frozen, leaving them surrounded by scaffolding and in an unfinished state. 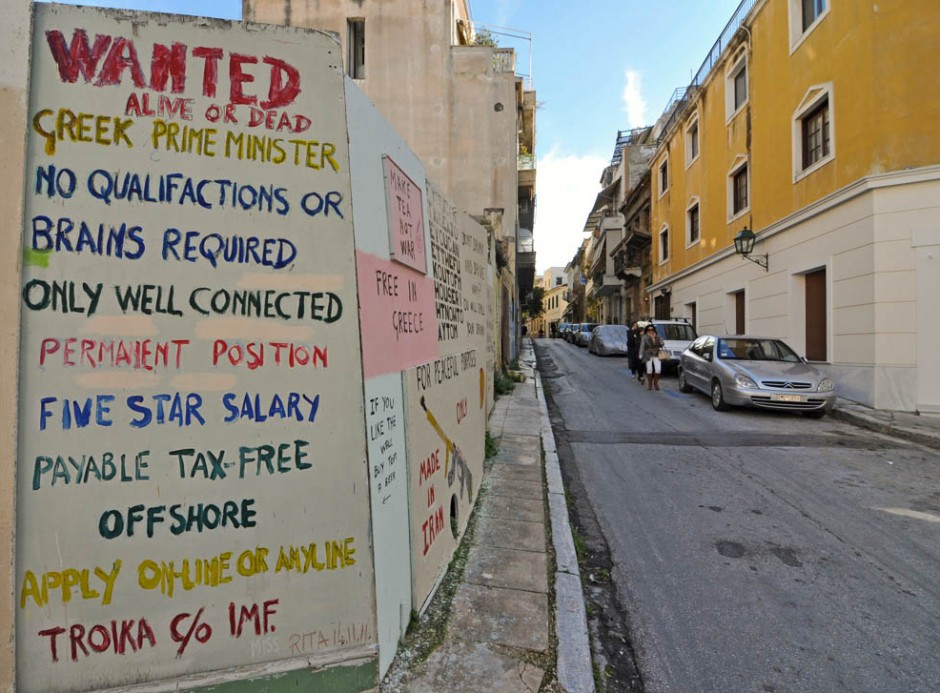 Signs in Athens’ center mock Greece’s political system, which is viewed by many citizens as corrupt. Incidentally, the man who owns—and lives behind—this decorated wall is an Irishman named Tom. He routinely changes his messages on the wall to reflect his social and political frustrations. 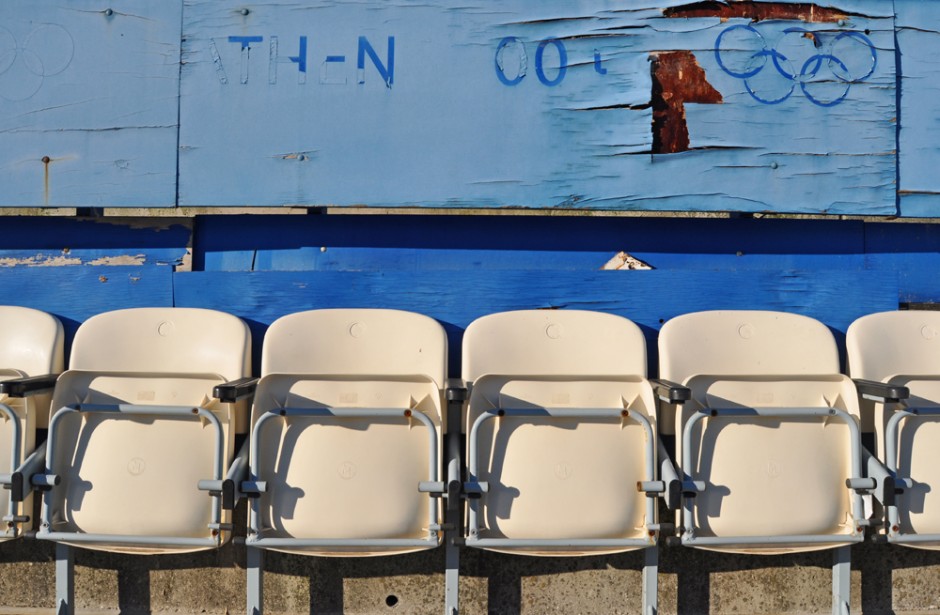 Erosion is on full display at Athens’ Olympic Athletic Center (OAKA), where the city played host to the 2004 Summer Olympics that cost them approximately 11 billion euros. I stepped off the train to take a walk around the complex, and was surprised at how easily I could walk about the grounds and into the facilities, which are largely deserted. 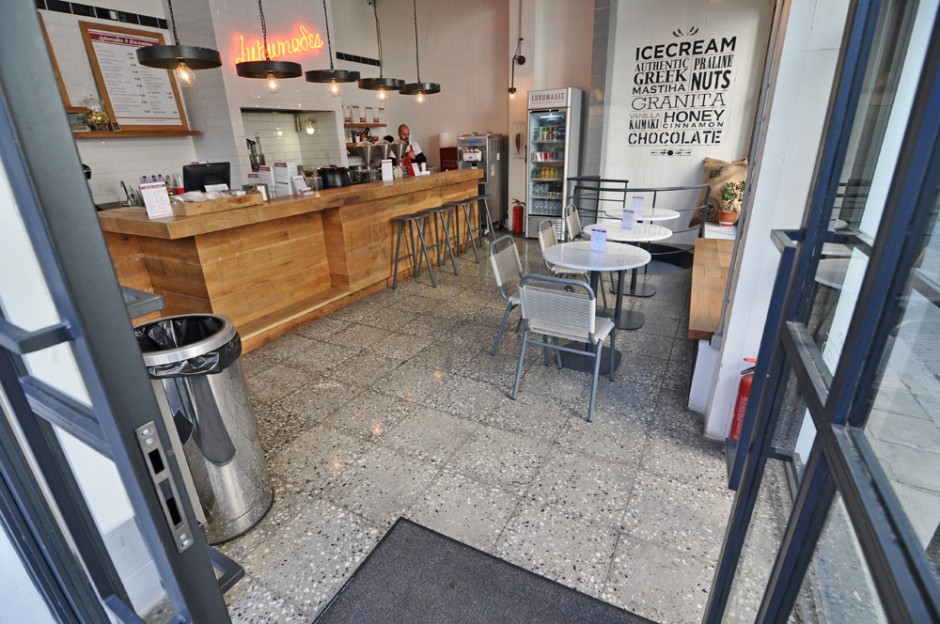 Greek is chic in the country’s capital, where new businesses such as Lukumades offer a new twist on historic dishes. I’d both read about the shop and tried some of its fare—traditional Greek deep-fried doughnuts that can be filled with lemon, mastiha, or praline cream—before happening on it as I readied for the day. It was encouraging to me to see that Athens continues to be a burgeoning center for food and culture, despite its hardships. 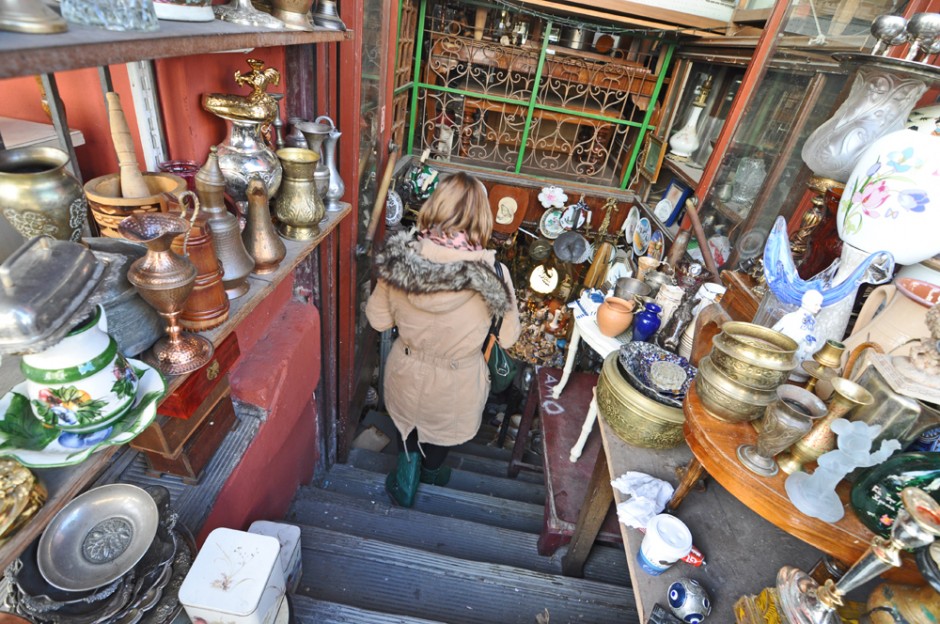 Though many businesses have shuttered, Athens’ flea market remains as bustling as ever. Here, two women descend to the basement of one of the city’s many antique stores, where you can find a variety of items including carpets, lamps, coins, stamps, and clothing from the Second World War. 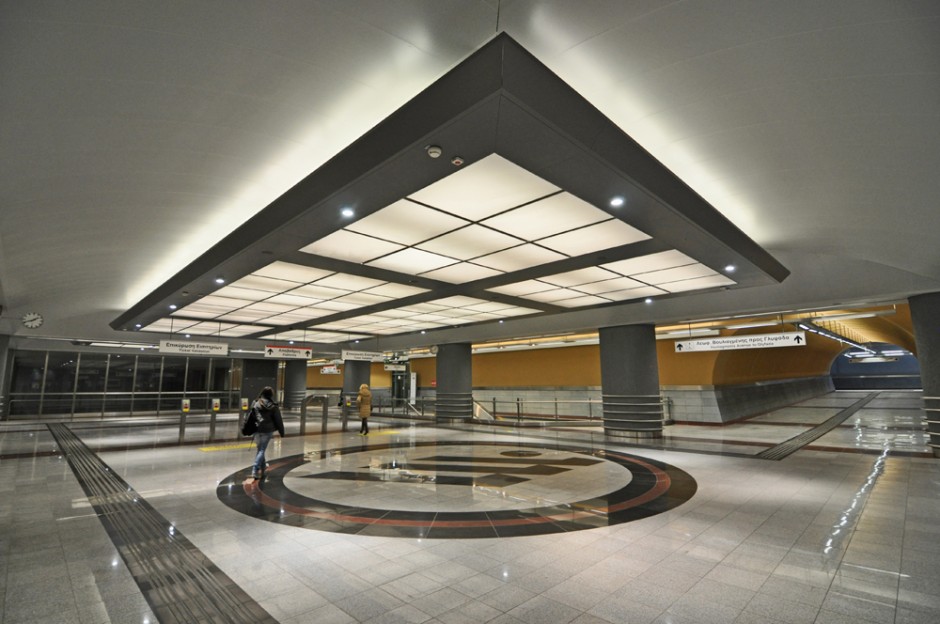 Commuters enter Ilioupoli Station, which opened in July 2013 as one of Athens’ many new additions to its sprawling and efficient metro system. Expanding the metro line—which received a massive overhaul, completed in 2003—is seen as part of the city’s efforts to curb pollution and traffic. It is estimated that the metro carries nearly 400,000 riders a day.