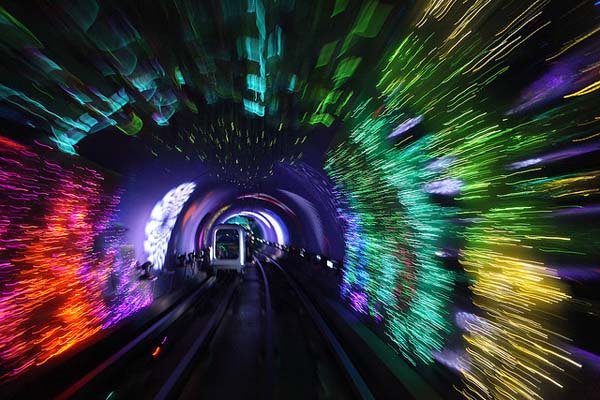 Rich Stupart profiles some dope results of drug use in history.

[Editor’s note: We do not condone the use of illegal substances. This is for entertainment purposes only.]

FACT: Drug use has occasionally been responsible for inspiring people to high levels of achievement.

There are lots of examples in music and works of art, but the likes of LSD and cocaine have also resulted in radical breakthroughs in science and some famous works of literature. These are some of them.

Created by early man all over the world, using audiodriving and psychedelics.

Many groups around the world have long practiced drug-induced or drug-like experiences as a way of accessing a mental world that is invisible to the normally conscious self. While some indigenous American groups would use tobacco and fasting to induce this trance state, others would use psychoactive drugs (peyote anyone?) found in nature to explore this “other” world.

The San of Southern Africa, for example, would use a technique known as audiodriving. Which is based on prolonged sessions of dancing and repeated beats. The stimulation of the music and the exhaustion of the dancing combines to produce an altered state of consciousness not unlike an acid trip at times. 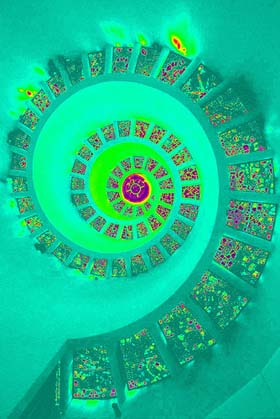 In the modern world, some folk do a very similar thing at all-night dance parties, or in the halls of charismatic churches, where worshippers might sing and dance feverishly for hours before someone becomes ‘possessed’.

The way this bizarre effect was explained in an unusually engrossing Archaeology class years ago, was that humans are basically neurologically wired so that when the brain overloads, it will trigger nervous activity on the optic nerve. The result of this is that when tripping in hallucinogenic states, you may initially see certain basic shapes that your optic nerve creates on overload.

Grids, spirals, lines, and dots are all common to the human eye-brain connection when hallucinating, and then these ‘visions’ are rapidly interpreted as the brain tries to understand what our eyes are ‘seeing’. A grid may be the patterning on an animal for some or cloth for others. And so the magical voyage begins.

It’s not particularly surprising that this inner world, full of magical creatures and events which cannot be explained, would form the primitive basis of religion.

If not invented, at least heavily crafted by Bob Marley and involved a large amount of cannabis.

One of the world’s first pop superstars and the man who gave the world “I Shot the Sheriff”, “No Woman, No Cry”, “Could You Be Loved” and many more. His posthumous compilation album Legend went platinum more times than it’s possible to smoke Mary Jane in a single sitting. 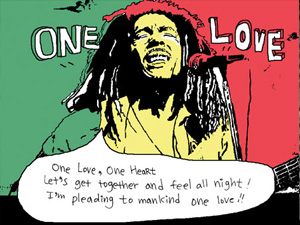 Marley was a member of the Rastafarian movement, for whom marijuana is a sacrament, taken to clear the mind and heal the soul. And, occasionally, make some damn good music. The relationship between musicians and drugs is hardly new. Or that occasional (and sometimes much more than occasional) drug use fosters creativity in a manner that is just not possible using, say, mind mapping or word association.

Marley himself saw smoking dope as something to be taken seriously though, consistent with his Rastafarian roots. For him, it was an aid to meditation, and opening the mental and spiritual door that inspired much of his art.

Hunter S Thompson took pretty much everything and changed the way journalists wrote.

We had two bags of grass, seventy-five pellets of mescaline, five sheets of high-powered blotter acid, a saltshaker half-full of cocaine, and a whole galaxy of multi-colored uppers, downers, screamers, laughers… Also, a quart of tequila, a quart of rum, a case of beer, a pint of raw ether, and two dozen amyls.

Not that we needed all that for the trip, but once you get locked into a serious drug collection, the tendency is to push it as far as you can. The only thing that really worried me was the ether. There is nothing in the world more helpless and irresponsible and depraved than a man in the depths of an ether binge, and I knew we’d get into that rotten stuff pretty soon.

Pro-drug and anti-authoritarian, Hunter S. Thompson was credited with the first example of Gonzo journalism for his article “The Kentucky Derby is Decadent and Depraved”. Fear and Loathing followed soon after. It was a wild trip into Las Vegas, sampling most of the drugs of his generation. The New York Times would call it “by far the best book yet written on the decade of dope”. 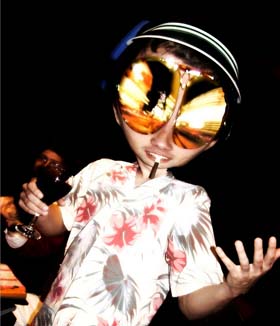 Later a movie, Fear and Loathing was the result of Thompson attempting to capture the soul of a drug trip in Vegas in sober writing after the fact. With the help of a voice recorder, he tried to capture and then unscramble what had happened to him on his wild inner journey.

Writing himself into the story with a heavy dose of literary technique, Thompson made it acceptable for a generation of aspirant journalists to become emotionally and mentally invested in the stories they told. It was blasphemy to how Journalism had been done in the past, but the popularity of his approach has endured.

Oh, and on his death, his ashes were fired from a tower he had designed, in the shape of a two-thumbed hand holding a peyote button.

Dr Kary won the Nobel Prize for Chemistry in 1993 for the invention of PCR, a technique which would allow certain sequences of DNA to be amplified for testing. This would would revolutionise DNA chemistry, making it far easier to isolate, amplify and test DNA sequences. In an interview, Dr Mullis attributed part of theorising this breakthrough to LSD:

Would I have invented PCR if I hadn’t taken LSD? I seriously doubt it. I could sit on a DNA molecule and watch the polymers go by. I learnt that partly on psychedelic drugs.

Where there was little precedent in molecular science (or shapes in general existence, for that matter) from which to derive and manipulate the twin helix structure, it’s not too hard to imagine a ladder bending or polymers in flight when tripping on LSD.

The Strange Case of Dr Jekyll and Mr Hyde

Robert Louis Stevenson, with a foreward by cocaine. 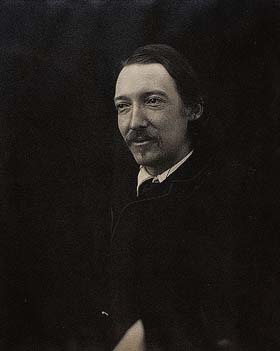 Stevenson was busy destroying stereotypes way back in 1886 and proving that cocaine could enhance the performance of others besides advertising executives or the celebrity nightlife circuit. While high on coke, he would write one of the classics of English literature.

All sixty thousand words of it. In six days. in 1886. Which would make NaNoWriMo look positively lazy. While cocaine may not have been the primary inspiration for the book, the idea of two separate mental universes in a single character would not have been too much of a stretch for Stevenson to imagine during his frantic writing.

Whatever your feelings towards your father, Sigmund Freud is akin to the godfather of psychoanalysis — the man who invented ideas of the unconscious mind and repression which still inform branches of psychiatry. His contributions to modern thought also included the practice of free association, the idea that dreams could be a gateway to the unconscious, and the assertion that sexual desire ultimately motivates much of human endeavour. Bars on Friday night appear to corroborate this thinking. 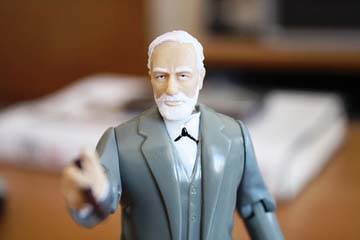 Less well-known outside of the psychoanalytic circuit was the fact that Freud was something of a coke fiend in his twenties, back in a time where the stuff was as common as Coca Cola (which contained coca extract as well). In 1884, he published a paper titled “On Coca”, expounding the virtues of the drug in curing a range of mental and physcial problems.

He would eventually come off the stuff (mostly) by the time he produced his most famous psychoanalytic insights. A minority credit his earlier interest in dreams and the unconscious mind in substantial part to the effects of the drug, arguing that cocaine — in moderate doses — is known to enhance sexual arousal and provide heightened focus for investigating new feelings.

Art and Music are some of the most strongly drug-influenced areas of human endeavour, but by no means the only ones. Do you have any fantastical drug-inspired creation stories that are not widely known?

The best vegan energy snacks and meals for outdoor adventuring

Anxious about a future trip? A therapist explains how to overcome the fear