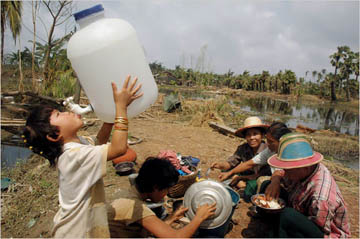 I landed in Yangon, the capital city of Myanmar, a very ignorant young woman.

I traveled there on a whim and, upon arrival, knew nothing about the country. So you can imagine my surprise to learn that the men wore skirts (called longyi), the women have yellow powdered circles on their cheeks (called thannaka), and that the country has no banks and, therefore, no ATM’s.

I only had $350 American dollars in my pocket to last me for three weeks.

Somehow, I survived on $10 a day and, three weeks later, I left Yangon a changed person, with a bigger heart and a desire to see this country’s people rise from their currently powerless situation.

That was one year ago. I departed from Yangon less than one month before the peaceful protest to Shwedagon Paya went wrong. And now this: a cyclone.

This beautiful country with generous (and helpless) people is suffering from one of the worst natural disasters in a decade and all their government closes their borders to aid? I just don’t get it.

The more I travel, the more I have seen how beautiful this world is. The human spirit is an amazing and resilient thing.

Now in Colombia, I can’t help but think of Myanmar and try to make sense of how desperate a nation can be without proper leadership.

In Colombia, I see a people rising from the ashes of a horrific terrorist regime and finally beginning to reap great rewards (i.e. booming tourism and growing economic stability) thanks to their whole-hearted support of wise President Alvaro Uribe.

Yet in Myanmar, we are witnessing a country dealing with two very different but equally debilitating disasters.

Myanmar’s political crisis is rotting from the inside. Its neighbors – Singapore, Indonesia, Vietnam, Thailand, Cambodia, and even Laos – have Western amenities like throne-style toilets, cellular phones, and fairly organized streets.

Myanmar’s major cities of Mandalay and Yangon survive in the dark ages, with each apartment running on self-funded power generators. Toilets and phones are the least of this country’s concerns.

Its oppressive military government continues to suppress its people and their ability to join the wider technological world.

On May 3, Cyclone Nargis struck the area surrounding Yangon and has likely killed more than 50,000 people. The government has been reluctant to accept aid even from India and Thailand, who have a vested interest in continuing trade with the country.

This is a country that needs massive worldwide support and attention.

Regardless of whether the Myanmar government chooses to allow aid for this disaster, there are ways to help the helpless.