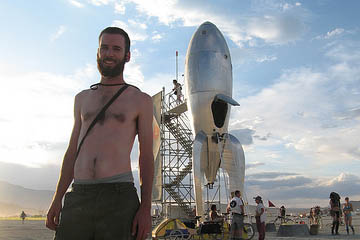 Prior to the event, I wrote about my expectations in Burn Baby Burn.

Having now returned from the desert, I can honestly say Burning Man was an event unlike any other. In fact, I’m still processing exactly what it is.

In the meantime, I humbly submit my own photo set of the event, with additional photos by Ross Borden.

(Interestingly enough, I found it difficult to take photos, even with all the visual overload. Cameras seemed woefully inadequate to capture the true essence…but I tried anyway).

Along with my photos, here’s a roundup of my favourite post-BM links around the web. Enjoy!

Jay Michaelson, in The Truth About Burning Man writes:

It’s not sustainable, but it is a temporary autonomous zone of bullshit-free living. And just being there, just participating in the creation of an entire city devoted to what we want to do, rather than what we have to do to make money, has the tendency to invite self-reflection like Lampert’s. Who am I? What do I really want to be doing?

Mark Morford, with his trademark wit in The Life Lessons of Burning Man says:

BM reminds you that you are far from alone in your understanding that this is one hugely painful, incredibly difficult, unbearably gorgeous, terrifying, excruciatingly short life experience and sometimes the best you can hope for is to dress in fake fur and mount the dragon and scream from atop the roof of a dusty RV of your ravenous desire to lick the moon.

Joanna, my fellow friend at Camp Nomadia, summed it up like this:

While I can’t quite put my finger on the defining moment of my Burning Man experience, I think the very idea that we define who we are in relation to the rest of the world is a significant key in this mad creation of a city in the desert.

Standing out on the playa one night, I spoke to a friend who had only just arrived midweek. She was wound up and the look in her eyes were one of apprehension. I mentioned to her that no matter what, her being there meant that she was going to change.

“That is what I am afraid of.”

Finally, Leigh sums it up when she says:

Much like the Indian proverb of the wise men and the elephant, this beast is too big to know and understand in its entirety. You lay on your hands and feel what you do, perhaps blindly, then take away what you want.

Did you write about your post-BM thoughts? Share a link in the comments!

What did you think of this article?
Meh
Good
Awesome
Bookmark
Posted In
Travel
Destinations
Nevada, United States

Nevada as you’ve never seen it

The first cannabis ‘speakeasy’ is coming to Las Vegas

The best restaurants and bars at the Las Vegas McCarran Airport