On Saturday, I attended a workshop on sacred activism, where the instructor showed this video of environmentalist Paul Hawken’s speech at the 2006 Bioneers conference:

At the beginning of the speech, he says:

It is my belief that we are part of a movement that is greater and deeper and broader than we ourselves know or can know. It flies under the radar of the media by and large. It is nonviolent, it is grassroots. It has no cluster bombs, no armies, no helicopters. It has no central ideology. A male vertebrae is not in charge…it is growing and spreading worldwide, with no exception.

Hawken goes on to describe this movement as the intertwining of indigenous culture, the environment, and social justice. During his speech, on the black screen behind him, runs a list of the 130,000 minimum organizations in the world dedicated to social and environmental justice.

The power of using this tool came when he noted that the list would have taken the full three days of the conference to witness every single name. And though some of these groups employ traditional means of activism, such as loud protests, walking around with signs, or chaining oneself to a storefront, others take a quieter approach.

This “new” form of activism can happen alone through the way one decides to live their life (i.e. only shopping locally, so that you know where your food/clothes come from and that the people producing them are garnering a fair wage), or as part of a group via such avenues as microloans or community bartering.

The basic premise of sacred activism combines the tenets of social justice and spiritual connection.

The basic premise combines the tenets of social justice and spiritual connection.

I personally believe we are in a time of shifting perspectives, understanding that the us-vs.-them mentality has mostly lead to pain, war, and a whole lot of bloodshed. It seems that if we engage long enough with anything, there is the possibility of finding common ground, collaborating, and maybe most important of all, feeling a sense of compassion.

Or am I just being naive and living in a bubble? As we watch peaceful protesters lose their lives in Peru, and big oil once again failing to be reprimanded for human and environmental degradation, Hawken’s words can ring as hollow.

China continues its oppression of Tibet (and Lhasang Tsering doesn’t think the Dalai Lama’s “Middle Way” is working), and no matter how much we hope and pray for a positive outcome for both sides in the Israeli-Palestinian conflict, it seems to barrel forward.

Plus, our religious divisions worldwide seem to be growing larger instead of being bridged.

So is this where we are actually headed instead? 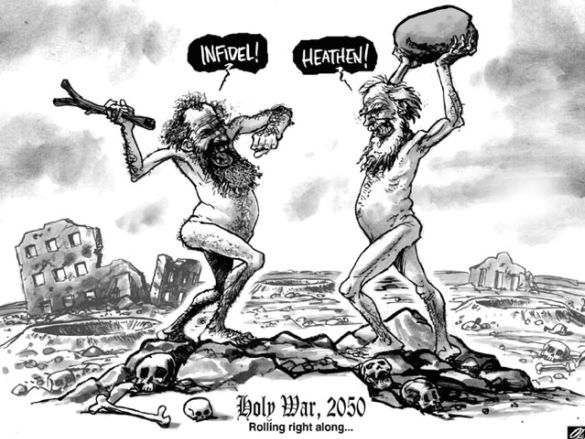 Do you think we moving toward a better future or one of annihilation? Share your thoughts below.