IT’S THE YEAR 2010.  Icebergs are melting, forest fires are raging out of control, sea levels are rising, drinking water is becoming scarcer, droughts, famine, conflict — climate related pressures — are growing exponentially.  Are you experiencing climate anxiety? Perhaps you prefer climate denial?  Or are you feeling through the heart break, to the possibility that lies beyond?

Right now, the positive visions being held by a tiny number of people are far outweighed by popular visions of collapse, disaster, gloom and doom. If we really want to put our planet on a path  to a safe, green, sustainable future, we need to paint an attractive, practical and well-analyzed picture of such a future that people can see, feel, understand, and fall in love with.  ~ Guy Duancy

The undeniable fact is that this planet — and the humans that live on Her — is in deep trouble. If we continue to drag our feet, resisting the changes we need to make, the majority of scientists are predicting that we will experience runaway climate destabilization within this century. In the face of all this, I have a question for you: how can this crisis – the greatest challenge humanity has yet faced —  be transformed into the greatest love story on earth?

The future belongs to the most compelling story. ~ Drew Dellinger

Humans are story makers, myth makers — we are continually weaving disparate events into coherent narratives. It gives form and substance to our life journey, it gives us meaning. At any given moment, we are making choices about which stories we will animate. Often these choices are unconscious and, for many of us, we simply follow the script put forth by the dominant culture, or what cultural theorist bell hooks calls, “the dominator culture.”

Will we seize on the stories popular in mass media such as the apocalyptic narrative of the movie “2012”? Or the subtler apocalypse stories put forth by well meaning progressives, who have grown accustomed to what visionary activist Caroline Casey, calls “righteous disappointment?” I believe there is another story to be found — one that does not require putting happy faces on sinking ships, yet still offers the hope that we need to keep our hearts afloat through the storms to come.

As a documentary filmmaker and media activist, my journey has been to recognize the evolutionary zeitgeist — the life affirming spirit of the times — and capture these great meta-stories on film. The work is meant to act as both a reflection and a catalyst. I am currently completing the Fierce Love Project, a twelve year odyssey that began filming on the eve of the millennium and concludes in 2012.

The first film in the trilogy is called Scared Sacred — my journey to the ground zeroes of the world, those places where the worst calamities had occurred — places like Hiroshima, Cambodia, Bosnia, Israel, Palestine, Afghanistan, and New York City. 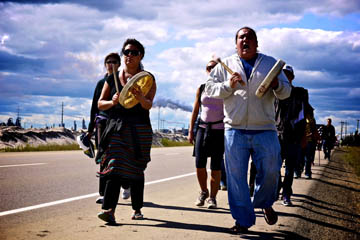 I was seeking stories of transformation in the face of crisis, and I found them. It was this journey that helped me to develop what I call my “industrial strength spirituality.” I learned first hand the truth taught by Auschwitz survivor Viktor Frankl, in his seminal book, Man’s Search for Meaning. We can lose everything, except for the freedom to choose the way we respond to whatever comes our way.

I discovered that there were two main things that kept survivors of great crises going: taking action to try to prevent what had happened to them from happening to others, and having a source of meaning. This led to my next feature documentary, Fierce Light: When Spirit Meets Action, my exploration of the powerful synergy that is found when spirituality is combined with action.

I am now beginning the final journey of the trilogy:  EVOLVE LOVE: Love in a Time of Climate Crisis, my mapping of the great love story that is life on earth, leading up to this critical transitional time that we live in, what is being called “the decisive decade.”

Learn how you can support the film Evolve Love by visiting Kickstarter.

The love story begins some 14 billion years ago, when we were all together as pure potential, followed by the explosion of creativity called “The Big Bang.” Through a process that can only be seen as miraculous, matter evolved: stardust became bacteria, which through intricate webs of collaboration, evolved into complex life forms and, eventually, into human beings able to celebrate the beauty of creation herself.

Now, for the first time, we are being called to consciously evolve.

Along the way, somewhere in the industrial era, a great heartbreak occurred, in which we separated ourselves from Life, from Love, and began to see the universe as little more than an extremely complex machine, a mere collection of objects. Not, as Thomas Berry says, “a communion of subjects.” With this point of view, matter was simply a resource to exploited, not a living entity to be respected as deeply sacred, as part of who we are.

Great love stories involve a separation, a yearning to be back together, forces that keep the lovers apart, and a coming back together in the end. The separation that’s been brought about now is so great, and the yearning for return is so strong … the love story would be a coming back into harmony with nature. ~ Rupert Sheldrake, Evolve Love Interview

At this crucial juncture in history, we need to wake up and choose to animate those stories that are life affirming — returning to the understanding that the universe is alive, and we are part of Her.

We need stories rooted in a fierce love, which means boldly facing the heartbreak of species extinction, of human suffering, of eco system collapse — while celebrating the explosion of compassion, love, and possibility that is rising all over this trembling globe, which Paul Hawken calls “humanity’s immune response to a planet in crisis.” 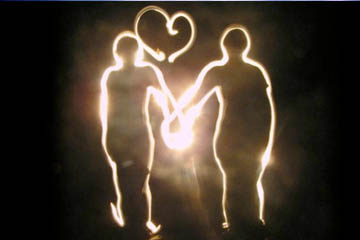 What will the future hold?

In the course of creating EVOLVE LOVE I will be traveling the globe, seeking out those flash points of transformation, as well as the  places of great heartbreak — like the Alberta Tar Sands, one of the largest contributors to climate change on the planet.

I started filming this spring, in Cochabamba, Bolivia, at the “People’s Summit on Climate Change.”  The summit was called by the indigenous president of Bolivia, Evo Morales, in response to the climate summit in Copenhagen, which the gathering has deemed “a failure.”

The People’s Summit is calling for the halving of greenhouse gas emissions by 2020, the creation of an international climate tribunal to judge countries on global warming, and a massive, global referendum on climate change. It created a Universal Declaration of Mother Earth Rights, which Evo will bring to the next Climate Summit, COP 16 in Cancún. I will be there, following the thread of this unfolding story. How will this message of Cochabamba be received in Cancún?

During a press conference, I asked Evo Morales the central question of  Evolve Love: How can the climate crisis be transformed into the greatest love story on earth? His response was that the love story is between humans and mother earth — Pachamama.

That hope is our choice. That it lies in defending her, in recognizing that Mother Earth rights need to be our number one priority. From that, everything else will follow — human rights will follow. It is a radical inversion — though not from an indigenous perspective — this idea that Mother Earth rights precede human rights. As Eduardo Galeano said in his statement to the conference, the indigenous heart comes from inside nature, while so many of us are on the outside looking in.

We can’t know what the future will hold. No one does. But whether we will be able to “save the planet” or not, the greatest source of hope and meaning lies in taking action, from the heart.

We have the opportunity now to join in on the celebration of possibility, to align ourselves with the forces of life. We’ll need to become skilled at walking the line between urgency and hope, maintaining our balance in a world out of balance.

I’m convinced that out of the crucible of crisis, the greatest love story on earth could be born.

You can support the film Evolve Love. Visit the Kickstarter Campaign to more.