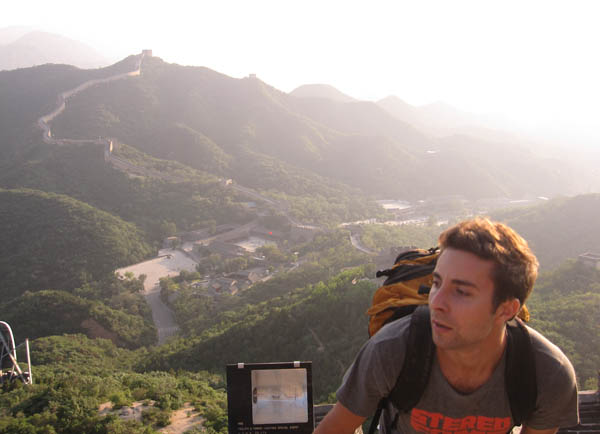 Brook Silva-Braga at The Great Wall.

An interview with New York filmmaker Brook Silva-Braga on the complex relations between West and the rising East.

ACCORDING TO RECENT REPORTS, the Age of America is rapidly drawing to a close. In fact, the IMF puts its money on 2016, the year when China will overtake the USA as the world’s leading economic power.

What will this mean for the world? And in particular, what role has America played in supporting the rise of a decidedly Communist (and undemocratic) regime?

Filmmaker Brook Silva-Braga ventures into this complex relationship with his superb new film “The China Question.”

I sat down with Brook to discuss the journey and his own experiences making the documentary.

BNT: How did the idea for this film come about?

BROOK: Well I knew I wanted to do something about China and America but it’s such a big topic I wasn’t sure how to wrap my hands around it. For years my mom has refused to buy anything Made in China and eventually it occurred to me her boycott could be a hook for the movie. So we kind of look through the different economic and moral issues through the frame of my mom’s boycott–is it a rational response or just a silly one.

Aside from your mom, how did you decide on your subjects?

With all my documentaries I’ve had the rare luxury of time, so I’m able to travel around and get to know people before deciding who I’ll profile. That was pretty much how it went, I would meet people through trade fairs or Couchsurfing or mutual friends and if they had an interesting story I’d follow them with the camera for a while.

How was filming this different from your previous films?

One of the main differences is it has a big American component–my previous projects were entirely foreign. Having spent all this time traveling around the world telling these different stories it was cool to do it at home.

Well in certain ways shooting in the U.S. is a lot easier because language isn’t a barrier and it’s just a much more open society. But China was a lot of fun to shoot in too and, like always, having the camera gives you an excuse to ask people about their lives, enter their homes and offices, and have conversations that would be impossible without the excuse of making a documentary. 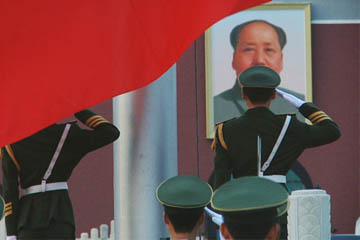 Were there any favourite scenes that ended up being cut?

Yeah, I shot 110 hours of footage over nearly two years so there’s a ton of stuff I wish I had found a place for. There was lots of historical background that got cut, a lengthy section on Chinese exchange students in America and some lighter moments from our travels. The reason things didn’t make the final cut was usually that they were just a little too far off the central topic.

Did you ever feel under scrutiny with your video camera in China?

Rarely. There were certainly times when people seemed a little wary of the camera but I’m not sure they were more frequent in China than the U.S. Actually, in all the time I spent shooting in both countries the only time I was told it was illegal to film was on a train outside New York City.

You describe the visual shock of leaving the city and hitting the countryside…what was the biggest difference in your relationship with the people?

Well there’s a pretty big education and income gap between Shanghai office workers and rural farmers, so while it’s pretty easy to relate to white-collar urbanites in China there’s less common ground when you go out to the countryside. The people tended to be friendly, curious, generous hosts but you wouldn’t want to start a conversation with, “So, Mac or PC?”

In the film, you show your Chinese friends the iconic photo of Tiananmen Square, with the man in front of the tanks. They have largely never seen it before. You then go into the idea that governments can engage in “active forgetting.” In your opinion, what are the dangers of “active forgetting” to a society? Or in the case of China?

It’s a Chinese professor, Cui Zhiyuan, who makes the point about “active forgetting.” He suggests that every society–and individual–chooses certain painful moments of their past to forget. Cui argues that it’s necessary for their health. But it can certainly be argued that forgetting the past makes it impossible to learn whatever lessons are embedded in that painful history.

In your final scenes, I couldn’t help but get the feeling of the dealer/junkie relationship between China and the US. China makes the goods, while the US buys them, often at a frenzied pace. Is there some truth to the metaphor?

Yes, I’ve heard that comparison and it does make some sense. And its not just the cheap goods that America has been hooked on, its also the easy credit China indirectly provides that allows Americans to buy even more cheap Chinese products. Maybe what’s best about that metaphor is it suggests how difficult breaking the addiction is but also reminds us it’s the junkie’s responsibility to take responsibility for his actions, not just blame the dealer.

The film leaves the viewer with the sense that your mom’s boycott isn’t “the answer.” Do you feel boycotts are ever an answer in response to issues of injustice?

History shows they can be. Divestment from South Africa helped bring down Apartheid, for instance. But in situations this complex a more sophisticated response is the real solution; without suggesting what the answer is my hope is the film will help Americans realize that some kind of thoughtful, coordinated response is needed.

How has your opinion changed from the China you thought you knew before your experience?

It’s a bit sad to say as a freedom-loving American but it’s given me a new respect for how well their often-repressive authoritarian socialism works. They have a plan and they stick to it and so far its worked unbelievably well. The question for China is how much longer this top-down rule can be effective and the question for the west is what will it mean for our values and way of life when the richest country in the world resembles a dictatorship.

Don’t miss my previous two interviews with Brook Silva-Braga on his past films “A Map For Saturday” and “One Day In Africa.”

Tagged
Culture Activism China
What did you think of this story?
Meh
Good
Awesome