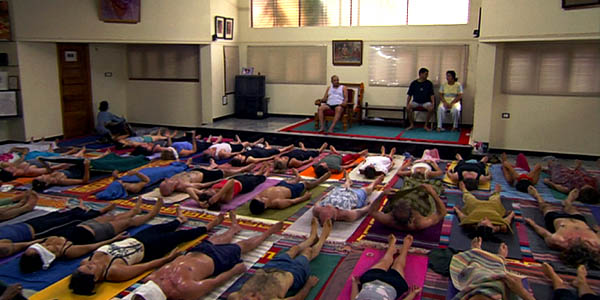 Pattabhi Jois and students at the Ashtanga Yoga Research Institute in Mysore, India.

Follow Nick Rosen, a self-proclaimed skeptic, on his beginner’s journey into the world of yoga.

Filmmaker Kate Churchill has been practicing yoga for 12 years. In that time, the form and variety of yoga has exploded, but she remains convinced that yoga can transform anyone.

Enter Nick Rosen, a New York journalist and all around skeptic.

He’s fairly certain yoga is good for nothing more than staying limber, but he’s willing to try any school, and meet any guru, to see if it’s more than skin deep. The resulting film, Enlighten Up, is a fascinating journey into the heart and history of yoga.

Surprisingly (at least for me) the film is about more than this ancient spiritual practice.

Nick ends up battling his own psyche as much as his flexibility; and Kate plays a much larger role than she originally intended. Both participants learn that the path into their perfect practice is really a path into themselves.

On the eve of her film’s premiere, I spoke with Kate Churchill in an illuminating interview about life, poses, and the secret of happiness.

BNT: What first attracted you to yoga?

Kate: I started practicing yoga consistently about 12 years ago (it was 7 when I started making this film). After decades of playing sports, my body was starting to fall apart. A yoga studio opened in the neighoborhood and I decided to try it to allieve some of my physical aches and pains.

How did you come up with the idea for Enlighten Up? 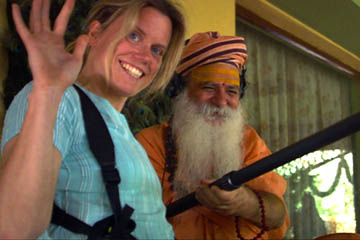 Director Kate Churchill with Gurusharanananda at his
ashram in Northern India.

The initial idea for this film came from Tom and Jeanne Hagerty, the Executive Producers, who had gone on their honeymoon to Hawaii and met Norman Allen, an unusual yogi who lives in a remote part of the island.

The following year, they approached me about making a film. At that point, we were all practicing at the same yoga studio, and I don’t think we had any idea what we were endeavoring to do.

What drew you to casting Nick Rosen as the yoga guinea pig? Was there anyone else that came close?

We considered a number of different people. Ultimately we chose Nick for a number of reasons. I liked that he was a journalist, he was good at researching and asking important questions and he was skeptical about yoga.

In the film, you come across a bit like a task-master, keeping Nick to his yoga goals. Did you anticipate that you would need to play this role?

I had never planned to be in this movie. When we set out, I had no idea the conflict between my expectations and Nick’s identity would become such an issue. Ultimately, in the edit room, we realized that conflict was the driving engine of our film.

What was one of the biggest challenges making this film?

The biggest challenge for me was accepting to include the conflict between Nick and me as a vital part of the story. Putting myself in the film, and examining how my actions affected Nick was a very humbling experience.

Throughout the course of the film, Nick learns how yoga intersects with ideas of God and happiness. What did you personally take away from these experiences?

How did your own perception of yoga change throughout the course of the film? 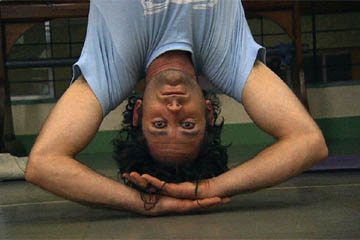 Nick Rosen’s perspective is turned upside down
in Pune, India.

I started out thinking we would find one yoga practice and teacher that would answers all of our questions. I ended up realizing that there is no one teacher or practice that will give me everything I need.

Were there any favourite scenes that had to be cut?

We shot more than 500 hours of material, so there were many interviews and scenes that had to be cut. One scene I really liked that we had to cut was when Nick went to visit Russell Simmons, a dedicated yogi and prominent leader in the hip hop world.

What was the most important insight you learned about yourself?

I learned that my expectations can sabotage my journey, and I can find what I need right in front of me if I am aware.