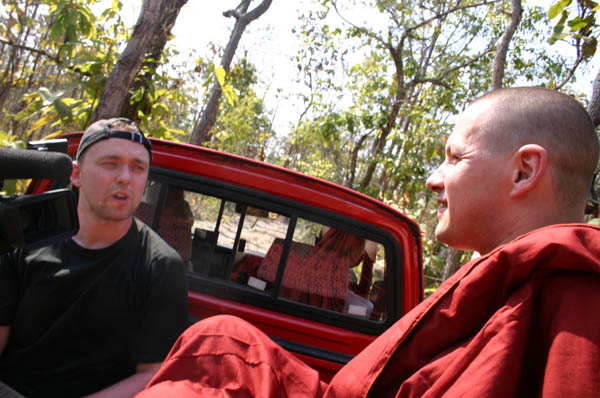 From the monastery and marriage, one filmmaker’s thoughts on following a Buddhist monk for 10 years.

Robert T. Edison was born and raised in Nottingham, England. When he was fourteen years old he began to practice Buddhism.

In 1994, he became the first Buddhist monk in Iceland and founded a Buddhist sect. Five years later Robert decided to “disrobe” and get married.

After sixteen years of celibacy Robert had to deal with the “real world” – getting employment, paying his bills and dealing with the needs of his partner. In short, he had to act normal.

Filmed over 10 years, Act Normal is a fascinating journey by a man looking to either face the world head on, or ultimately escape it.

I caught up with director Olaf de Fleur to interview him about the film, his interest in Buddhism, and what it’s like to dedicate 10 years of his own life to a project.

BNT: First, what drew you to Robert Edison as a subject? Did you already have an interest in Buddhism?

OLAF: I was doing a film at the time with several interviews about the meaning of life, Robert was one of the subjects. I was drawn to Buddhism through him and started to randomly film.

The film follows the subject for quite a period. Were you on board to make a documentary from the very beginning? Or was it an idea that evolved over time?

It evolved over time. I filmed some interviews with Robert, following him around with my film-making friends, always when I was going to close the film, something new happened. It all sort of happened by itself. I can’t say it was a very conscious decision to make this film.

The best kind of film work I do happens like this, almost by itself, with limited conscious participation. It’s hard to describe, but it’s just a feeling I follow and it’s nothing very complex. Just a little gut kitten I chase down a street.

At one point, the protagonist Robert T. Edison, talks about how the life of a monk is not running away from life’s problems, but rather “confronting them head on.” Do you agree/disagree with his statement?

Agree or disagree is not perhaps the right term. I can relate to what he’s saying by that. It rings true for me, but of course not with everybody. Confronting life’s moments at their core, the feeling of each moment, sounds more true for me than chasing distractions.

Robert also says that while most religions agree life is suffering, religions disagree on the cause of suffering. What are your thoughts on this?

I don’t really have strong opinions on this. Which is an opinion in itself.

I haven’t studied religions at all. I’m more of a fan of trying to see things as they are. I could talk about religion for a long time, and I did do that as a teenager. But I feel that matter is so opinionated and polluted in discussion that I’ve mostly dropped it from my mind.

Finding useful rational tools that help in day-to-day moments is essential for each individual. I feel that the term “religion” is not extremely useful as everyday-life tool. Of course we each have our opinion about it.

With the wealth of material, what were some of the biggest challenges making the film?

Making a decent structure. Over time structure creates itself. So it was more a matter of patience and not trying to rush things. In this kind of a film there is no right or wrong structure, it’s very free flowing. In the end I decided to mix time phases of Robert’s life. Seemed like a good idea at the time.

Did you have any favourite scenes that had to be left out?

No, not really. I did not care much if the film was too long. It’s that kind of a film. If you’re interested in the subject then you’ll watch it. I was not trying to reach a main stream audience. When you do that, it’s useful to drop scenes for the sake of duration. That was not the case here.

It changed my life meeting Robert. The film was basically done for myself and those who have similar thoughts, doubting society and it’s emphasis. That there is more in the simpleness of life.

I don’t see myself as Buddhist. I’m just curious why humans complicate life and I love to study both ways, the complexities of the mind and the beauty of simple elements.