God is a popular topic these days. Most people seem to have an opinion on a) what God is, and b) who’s side he (or she) is on.

And thus arises the problem: how can God be on more than one team at the same time? If humans are the sort of species that don’t mind a few glaring illogical realities, than we’d probably get along just fine. Unfortunately, as most of us know, humans aren’t that sort of species.

Instead, it appears ever since the idea of God took hold, we’ve decided to fight about it. The only thing that’s changed is the size of our weapons and the stakes of the conflict.

Luckily, filmmaker Peter Rodger decided it’s time once and for all to explore how God is perceived around the world. The film, premiering this Friday in the US, is Oh My God.

Suitably intrigued, I decided to interview Peter about the film, and his epic experience shooting around the world.

BNT: What initially compelled you to start this film?

PETER RODGER: Frustration. I was amazed in a shrinking world of enhanced communication, mankind can be so seemingly narrow minded. There seems to be such a childish schoolyard mentality that permeates our world – I call it the “My God Is greater than your God syndrome.”

Where you have grown men flying airplanes into buildings shouting “God is Great”; where you have the leader of the free world telling the BBC in 2003 that he invaded Iraq because God told him to; where you have the constitution of a country (Iran) that dictates that its supreme leader is God’s representative on earth; where you have young men and women blowing themselves up (and innocent others) to buy a place into heaven.

None of these concepts made any sense to me, so I thought it was about time someone went around the world and asked people what this entity that goes by the name of God means to them.

Did you have any expectations on the journey and what you would learn?

No. I just knew I was going along for an interesting ride. I wanted to rid myself of expectation and see what the experience would throw at me. I had no idea what I would learn when I set out. I was far too concerned about how to make a film out of such a wide, sensitive and seemingly unanswerable question!

Your film features some stunning cinematography and editing – at times resembling a music video. How important was this aesthetic to the content and message of your film? 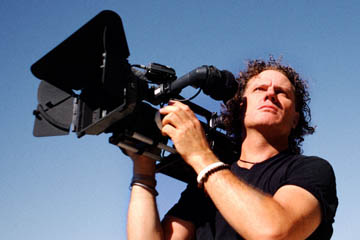 Extremely important. Another reason I had for making the film was to be able to go shoot without clients around my head – make a film where I wanted to point the camera and not because someone was paying me to point the camera. (I’ve directed many commercials!)

The aesthetic became extremely important. There is also a sub plot going on in the film. I wanted to shoot the earth with as much artistic integrity as possible – to wrap the audience in the amazingly diverse beauty that surrounds us – in the guise of a bucolic landscape or the look in a child’s eye.

To use a biblical phrase, the earth became the garden of Eden for me. If you want to explore the entity of God – then open your eyes, grab a camera and shoot it. Music played an enormous part in the process. Film is sound and vision. I would cut sequences with John Hoyt, my editor and then Alex Bubenheim would score to it – but in two instances in the film – we switched.

Alex had come with me on to Australia and Japan and had recorded all sorts of music/vibes/sounds etc that he incorporated into a track – so we cut to the track instead of vice versa – which gives you – as you said – a music video vibe in places. It’s a film full of amazing words and information – throwing 2 sequences into the mix like this has the effect of pulling you back and keeping a pace at the same time.

What were the challenges of travelling with a small crew? What are the advantages?

The challenges were a bad back and having to do EVERYTHING split between myself and my one crew member – Line Producer Patrick Ellis. But it is amazing what training does for you. 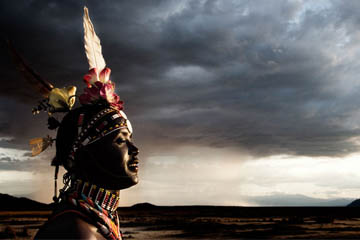 I learnt to put things back! Instead of just leaving a lens cap, or a filter somewhere for some assistant to deal with – I actually PUT IT AWAY! Amazing. It soon became that I could prepare the camera and prep to shoot in complete darkness without thinking, – just by knowing exactly where everything was.

The advantages for the film were amazing. We shot under the radar – no one would know we were making a theatrical movie. We slipped in and out of places, unseen, as tourists or NGO workers or whatever.

Once we walked into the Palestinian Parliamentary building one Thursday afternoon unannounced in Ramalah and got amazing stuff and a great interview with a Hamas leader. If we had a full crew – with assistants and production coordinators, translators and egos – we would have been arrested and locked up – especially as we didn’t have a permit.

In your opinion, why do people all over the world have a need to believe in God?

Because they don’t have the courage to believe in themselves. They have been conditioned to believe in something greater than the sum of all their parts. They are scared of death, and don’t know where they came from.

What Mankind has to learn is that there is room for us all.

Who were the people you met that appeared the most profoundly at peace? How did their understanding of God (or the divine) contribute towards their peace?

Zen Master Kanju Tanaka from Kyoto Japan. He was wonderful and made so much sense. Being a Zen master he rejects the concept of God. He believes that we are already in paradise – we are already here and conscious now because we have earned our place in paradise – here – already.

For some, life on earth is hell. It is up to the individual to have peace and realize that problems are self created and then even in the most dire situations with the right outlook and in-look we can learn to make our hell – heaven. That concept is very powerful.

At one point in the film, you make that connection that conflict is usually caused by two things: land and religion. I would argue even further – conflict at its core is never about religion. It’s about human insecurities cloaking themselves under religious guise. Do you feel in some ways the search to unite us in the common thread of belief detracts from the social and economic reasons behind world conflicts?

All wars are about money/land and most use religion as the excuse. Throw in emotion and you have a lethal cocktail. Good news is no news.

When it comes to conflict it’s about the club in which people belong – that maim those that don’t belong. So the answer to your question is yes.

Who was the most surprising interview you conducted?

Christian Hernandez, the little boy with cancer. (I am very happy to say he went through a bone marrow transplant and is doing REALLY WELL and he came to a screening last week.) I asked him – “What is your greatest wish today?” His answer blew me away – but you have to go see the film to find out why!

By the end of the film, how did your perception of God change? And what was the most important insight you learned about yourself?

Oh boy! My perception of God melted from any human form into a much more powerful force – a glue if you like – that binds humanity together.

I think Jesus Christ was bang on when he said he was the son of God because I think we’re all the son of God. We are all right now collectively what a lot of people would refer to as God – the Anima Mundi – the reservoir of every thought that has ever taken place in the history of time.

And what was the most important insight I learned about myself? To learn to let go.

Oh My God opens this week. Check the website for showtimes.

What do you think about the diversity of God? Is it a concept humanity needs to let go? Or does it serve a binding purpose?

Tagged
Photo + Video + Film Religion
What did you think of this story?
Meh
Good
Awesome