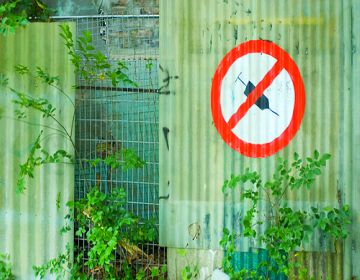 Things don’t look good for those who get caught bringing drugs into the Gaza Strip.

With nearly a third of the 300 prisoners in the main jail in Gaza detained due to drug offenses, a 10-year sentence is apparently not enough of a “deterrent for this lucrative trade,” at least according to Hamas and this article on Haaretz.com.

While Mexico legalized small amounts of pot and other narcotics in the “War on Drugs”, Hamas has decided to impose hard labor and the possibility of the death penalty on those caught smuggling drugs in through tunnel trade. It seems the tunnel trade in and of itself is officially sanctioned by Hamas as a way of defying Israel’s blockade, but it is much harder to control the flow of goods than through a normal customs process.

Recently seized contraband include washing machines full of hash and the Opiate pain-killer Tramadol. Ecstasy is another popular drug with the young, and ends up being sold in high schools.

It seems drug smuggling has surged in the past few months, or “increased alarmingly” to quote the article. Why could this be? Anything to do with the daily warfare and struggle for survival that both the Israelis and Palestinians must face? Hmmm.

Tramadol has been a big seller…among those of the population of 1.5 million who have found solace in drugs from after Israel’s three-week military onslaught last January, launched to stop Hamas firing rockets into Israel.

Though they are also sure to add: “The motivations of some drug-users are also banal: to banish boredom, improve concentration or for sexual enjoyment.” Ok, yes, that’s a given in any culture.

But along with the fact that the need to mentally escape is inevitable, there is also the tiny issue of excruciatingly high rates of unemployment and poverty rates in the Gaza (this article puts them at 50%). Where there is poverty, drugs will be sold, if only for monetary purposes. Really, it’s survival on both the economic and psychological fronts.

So, they’re gonna stop smugglers with the possibility of the death penalty. Good idea. Aren’t most people there facing that on a daily basis anyway?

Do you think taking a harsher approach to drug smuggling will work? Share your thoughts below.

Tagged
News Culture Israel
What did you think of this story?
Meh
Good
Awesome

The best countries in the world to live as an introvert
Europe’s first digital nomad village is opening in Portugal
NASA reveals its top 20 photos of Earth from 2020
New Zealand bought too many COVID-19 vaccines, so it’ll give them to neighboring countries for free
An all-female flight crew just made history with India’s longest commercial flight

8 American habits I lost when I moved to Israel

16 differences between a normal friend and an Israeli friend

Long before karaoke came to Israel, there were public sing-alongs