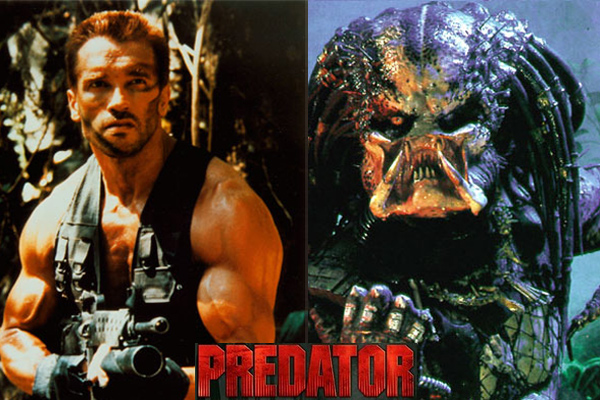 As a budding tween, I took great delight in seeing Arnold stand up for the human race and represent us proudly in his mano-a-mano battle with the crab-faced behemoth. But what was the Predator’s motivation?

ONE OF MY FAVORITE MOVIES of all time is the Schwarzenegger classic Predator, which came out in 1987.

After seeing the new Adrien Brody Predators sequel at the cineplex recently, I started to reminisce about the original movie and why it has stuck with me. No, the film is not exactly a brain massager. It’s extremely watchable but not really meant to make you think… but does it?

If you’re not familiar with the movie, here’s the plot in a nutshell: Arnold battles a badass creature, a hunter, who travels throughout the galaxy looking for other overpumped monsters to pit itself against in fair fights. The creature’s motivation is to challenge and prove itself.

This may sound like a stretch to some of you, but I think one can draw an interesting parallel between the creature’s epic battle with Arnold and our very human need to test ourselves.

I guess I’m saying that I identified more with the villain Predator character than with Arnold the hero… hmm. Before you start assuming I’m a sociopath, let’s first try an understand things from the Predator’s point of view.

All he wants is to test his mettle, to see what he’s made of, to put himself in an uncertain situation and find out what he can make of it.

Who among us doesn’t crave that occasionally? While men might manifest this in more seemingly physical and dangerous ways, both men AND women share an internal desire to prove themselves… to themselves.

This goes beyond simply satisfying the ego. It’s about forcing yourself to find out what your true personal limits are.

I try to do this regularly in little ways (like pushing myself at the gym) and bigger ways (like trying my hand at mountain climbing and ice climbing).

I’ve Fallen and I Can’t Get Up

There have been times when I’ve wondered if I’ve pushed myself too far. In these moments, I start having second thoughts, my mind starts racing and telling me I’m an idiot for putting myself in a crazy situation. But afterwards, presuming I haven’t hurt myself, I feel good about what I’ve done (or at least happy I didn’t die).

One immediately thinks of pushing physical limits, but there have been plenty of other non-physical ones like writing, or learning a new language, or trying to absorb some very difficult, abstract concept.These accomplishments are just as challenging and meaningful as physical ones.

So getting back to the movie for a sec, would the Predator have been just as satisfied learning Latin as he was kicking bodybuilder butt?

The Predator character’s backstory was so compelling and resonated with so many people that it ended up spawning a whole series of comic books and sequels and crossovers… a veritable Predator cottage industry. All this because an alien crab-faced creature was compelled to keep testing itself.

How do you test yourself in your life?

Akon is building a futuristic city in Senegal