If you missed the big announcement on Monday, this is my entry in the 5 Hilarious Travel Photos contest.

Entries have already started trickling in, which you can read by scrolling down and looking beneath the “recent readers” widget. I’ll be adding all the entries as they are submitted, up until the April 22 deadline.

As I’m a judge, I obviously can’t win. But I just thought I’d put together my list to offer inspiration and guidance when crafting your own 5 most hilarious photos.

Remember, yours doesn’t have to be structured exactly like mine. You can write as much or as little of the back story behind each of the photos you choose. Keep in mind, all entries will be judged on overall hilarity, and not on a single photo alone. 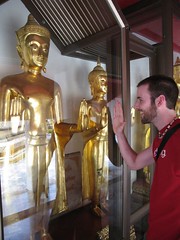 This photo captures my attempt to give the gold Buddha some skin…unfortunately the statue is behind glass and I probably would have been tackled by the Thai guards if I tried to touch it directly. 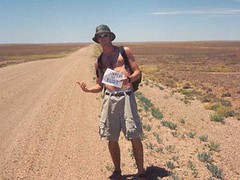 In spring of 2002, I took a Landrover across the Outback, with 8 other backpackers and our Aussie guide. What we found was a whole lot of nothing.

This particular stretch in the photo is aptly called The Moonscape. My handwritten sign says “Canada or Bust.” As you can probably guess, had I actually been left there in the desert, my odds of even seeing another vehicle were about equivalent to being hit by a meteor. 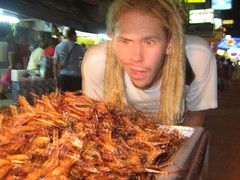 Usually I wouldn’t even trust the vegetarian noodles bought from a street vendor, let alone a heaping tray of steaming insects. Sean attempts to capture the moment with a combination of fascination, disgust, and yes…curiousity.

What became a casual dare suddenly turned into this. And let us never speak of this experience again.

4. A Shocking Experience (Whistler, BC) 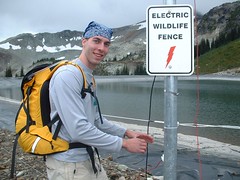 While on a hike with my friend Mike, we came across this dangerous-looking wildlife fence. We’re not ones to miss a great photo op when we see one, so we snapped this choice shot.

The best part is the look of sincere pleasure on Mike’s face as he reaches for the wires. Sort of a “Look what I can do, Mom!” as you push yourself higher on the playground swing. Except in this case, there’s a few thousand volts waiting to course through your veins. 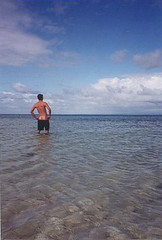 In 2001, I had just set out on my first solo trip. Having arrived on the beautiful and sparsely populated island of Leleuvia, I wanted to capture the feeling of total exotic freedom. Hence, the bare white ass.

But while the photo itself has always induced a chuckle in friends and family, think for a moment of the conversation I had when asking a complete stranger to take the shot. Now that was awkward.

So there’s my submission to the 5 Hilarious Travel Photos contest. Hopefully it inspired you to post your own entry – but hurry! The deadline is midnight on Sunday, April 22.

Americans are rushing to buy a second passport, and here’s what it takes
The best stops on the Blue Ridge Parkway
Everything Americans need to know about traveling to Mexico right now
This photographer drove cross-country to capture American life in lockdown
I’m a US citizen. Where can I travel in Latin America?