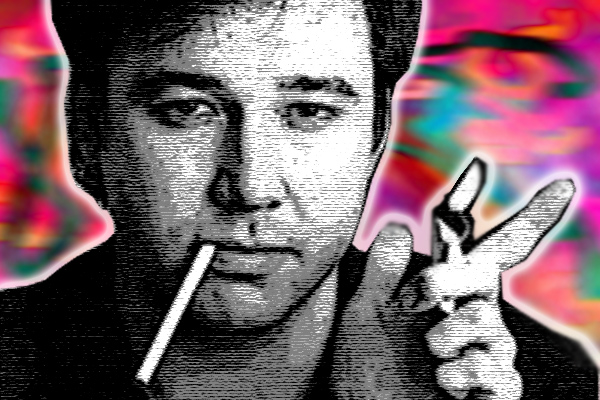 Comedian Bill Hicks had a way with words. His acerbic style made you either love him or hate, but one thing that was unique about his act was his spiritual bent.

Hicks grew up in a Southern Baptist family in the Houston suburbs and started doing stand-up at the age of 15. Since dying of pancreatic cancer in 1994 at the age of 32, Hicks has been lauded as one of the country’s best comics. In life, he was admired by other comedians and found some mainstream success, but never became a superstar.

He was one of the first to really discuss pointless insanity in the world and the banalities of life. While many comics make fun of politics and politicians, not many have punchlines that focus on how we are all one consciousness and that the purpose of life is love. How in order to be better people we need to “squeegee our third eye” that’s been covered up by the day to day.

In both his stand-up performances, and during interviews, he often criticized consumerism, superficiality, mediocrity and banality within the media and popular culture, describing them as oppressive tools of the ruling class, meant to “keep people stupid and apathetic.”

Hicks stayed true to himself and stayed funny as he sometimes dealt with uncomfortable topics. He called himself Chomsky with dick jokes. His material had a tendency to rile up conservative audiences — he had his ankle broken and had a gun pointed at him on tour and his final appearance on The David Letterman Show was famously censored in 1994.

Why is marijuana against the law? It grows naturally on our planet, serves a thousand different functions, all of them positive. To make marijuana against the law is like saying that God made a mistake. Like on the seventh day God looked down, “There it is. My Creation; perfect and holy in all ways. Now I can rest. [Gives shocked expression] Oh, my Me! I left fuckin’ pot everywhere. I should never have smoked that joint on the third day. Hehe, that was the day I created the platypus. Hehe. But if I leave pot everywhere that’s gonna give people the impression they’re supposed to…use it. Now I have to create Republicans.” “…and God wept”, I believe is the next part of that story.

I was in a cab in New York. The cab had a sign, “Please do not smoke, Christ is our unseen guest.” This guy was reaching. I figure, if He could overcome being nailed to a cross, I don’t think a Marlboro Light’s gonna faze Him that much.

I’m glad mushrooms are against the law, because I took them one time, and you know what happened to me? I laid in a field of green grass for four hours going, “My God! I love everything.” Yeah, now if that isn’t a hazard to our country … how are we gonna keep building nuclear weapons, you know what I mean? What’s gonna happen to the arms industry when we realize that we’re all one?!

“God put [dinosaur fossils] here to test our faith!” … I think God put you here to test my faith, dude. Does that bother anybody else, the idea that God might be fucking with our heads? I have trouble sleeping with that knowledge, some prankster god runnin’ around, [pantomimes digging] “We’ll see who believes in me now. I am the Prankster God — I am killing me!”

I was in Nashville, Tennessee, and after the show I went to a Waffle House. I’m not proud of it, but I was hungry. And I’m sitting there eating and reading a book…The waitress comes over to me like, [gum smacking] “What’chu readin’ for?” I had never been asked that. Not “What am I reading?”, but “What am I reading for?” Goddangit, you stumped me. Hmm, why do I read? I suppose I read for a lot of reasons, one of the main ones being so I don’t end up being a fucking waffle waitress.

Here’s a short clip from his act. Enjoy.

The oldest building in 100 major cities in the US