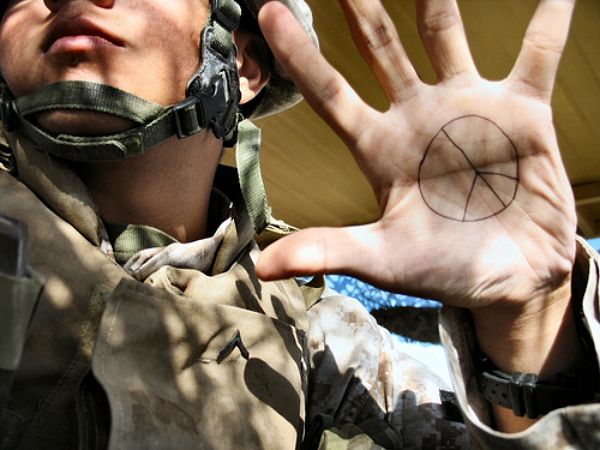 Social justice activist and historian Howard Zinn left us with some questions about human nature.

Last week, one of the greats passed on.

No, I’m not referring to J.D. Salinger, although he was also one. I’m talking about Howard Zinn – historian, writer, and social justice activist. He is the author of the quintessential book that changed my life, the People’s History of the United States.

If you haven’t read it, whether you are American or not, it will without a doubt re-frame everything you thought you knew about world history since the Declaration of Independence.

In a 2004 interview passed along from BNT writer Daniel Harbecke, Zinn discusses his beliefs around whether or not the desire to kill is a part of human nature:

Essentially, from his own experience in the Air Force to the vast research on history and anthropology that he focused much of his work on, Zinn could not accept the idea that young men, in particular, have a “desire or thrill” to go to war. Instead of humans possessing a “killing instinct”, he believes that leaders use complex tactics to get a population behind war.

Zinn questions, why would we need a draft if we have the spontaneous urge to kill? Propaganda through media outlets, whether that means the intricate placement and timing of code alerts and Bin Laden references, or men being sent by horse to towns throughout the land to espouse the government’s message, goes far to shift the perspective of a group of people (read: instills fear).

For those who don’t jump on that bandwagon, there is coercion punishable by jail time, otherwise known as the draft.

The environment in which one finds him or herself has a lot to do with an urge towards aggression or murder, just as much as it has to do with the urge to be peaceful and loving.

It seems to me we often like to blame atrocities on human nature. But as Zinn notes, the environment in which one finds him or herself has a lot to do with an urge towards aggression or murder, just as much as it has to do with the urge to be peaceful and loving. For example, Native-American and African tribes are often thought of as extremely aggressive OR peaceful, while in truth, their outward expression has had much to do with whether or not another “tribe” ruled over them – in other words, their environment.

While we can’t always choose our environment (perhaps this is part of what pulls us to travel), we do have a choice in how we act and react to our circumstances. Hopefully, our continued evolution allows us to better understand this fact. So instead of blaming “human nature” for war and killing – therefore blaming the people of a land – we can see more clearly the agenda of our leaders.

Rest in peace, Howard. We will miss you.

Do you think the urge to kill is inherent in humans? Share your thoughts below.

7 countries you can’t enter if you have a DUI The oldest city in every state, mapped Canadian Mounted Police fined seven US visitors $1,200 for hiking in Banff Mapped: The optimal road trip to see all the US national parks For the perfect day of hiking and Colombian coffee, head to Jardín