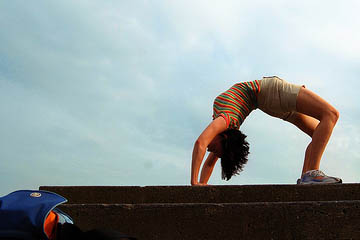 Most people tend to think of yoga as separate from religion, or at least non-dogmatic and non-denominational.

Not so to Islamic leaders in Malaysia: in November, 2008, Muslim clerics banned the practice of yoga by followers of the religion. The National Fatwa Council Abdul chairman Shukor Husin stated that:

“Many Muslims fail to understand that yoga’s ultimate aim is to be one with a God of a different religion.”

Insiya Rasiwala-Finn, a yoga teacher based in Vancouver and a practicing Muslim, was appalled by this ruling, especially considering she watched her devout father practice yoga every morning while growing up.

Yet she understands that yoga was originally a Hindu practice, and Hindu philosophies still pervade the tradition.

Should all Muslims, which number over 10 million in the US and Canada alone, refrain from taking part in the spiritual practice of yoga?

Does this also cause a problem for other religions, especially the fundamental factions found within many faiths?