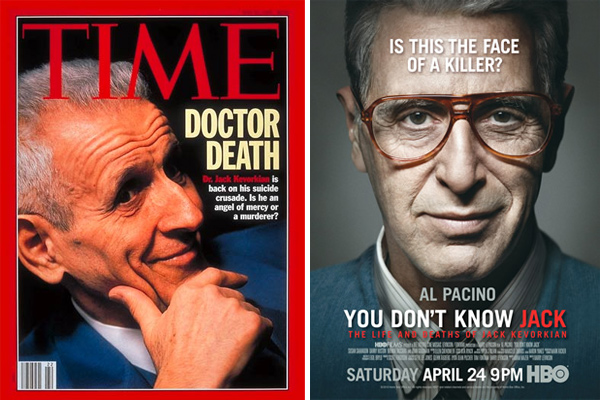 Right-to-die activist Jack Kevorkian has a busy summer planned. He’s got a book coming out, a documentary that just aired, and his very own biopic starring Al Pacino.

Even after nearly 20 years, the debate over Kevorkian and assisted suicide rages on. It’s obviously an extremely nuanced and controversial subject that encompasses emotions, belief systems about life and death and what it all means, and world views.

I was a little young when the Kevorkian media frenzy was taking place, so I wasn’t really paying close attention beyond seeing the occasional “Dr. Death” headline.

Now that I’m older, I’m fascinated by the renewed interest in Kevorkian and his story. I just saw the Kevorkian HBO film “You Don’t Know Jack” starring Al Pacino. It’s a pretty decent movie and Pacino makes a surprisingly believable Kevorkian, who doesn’t carry an ounce of the silly “hoo-aah” overacting Pacino-ness you can sometimes get. He explores the man’s qualities and flaws, creating a very three-dimensional person as opposed to a simple caricature (over the top and eccentric though Kevorkian is).

The story picks up in the late 80s when Kevorkian first decides to explore providing assisted suicide services. It follows him through 1999, when he was sent to prison for the voluntary euthanasia of Thomas Youk. He was released from prison in 2007 due to poor health.

The film includes scenes showing anti-Kevorkian protesters who chant, “Only God Decides.” When asked by Sanjay Gupta in a recent interview about whether he was “playing God,” Kevorkian said yes, he was. He said physicians “play God” every day, whenever they cure a disease, provide medication, or perform surgery. Kevorkian’s belief is in personal autonomy — that YOU should have the right to “play God” and decide when and how you die.

Zoe Fitzgerald Carter’s fascinating Salon.com article, What if Jack Kevorkian had helped my mom die?, reviews the movie and provides some very interesting personal context with the story about Carter’s mother’s own planned suicide.

“You Don’t Know Jack” and “Kevorkian”, the documentary are available on HBO. Here is a trailer for the film:

The topic of assisted suicide taps into all of our fears about death and religion and what it all means. People seem to consider Kevorkian either an angel or a monster. How do you feel about Dr. Jack Kevorkian and assisted suicide?