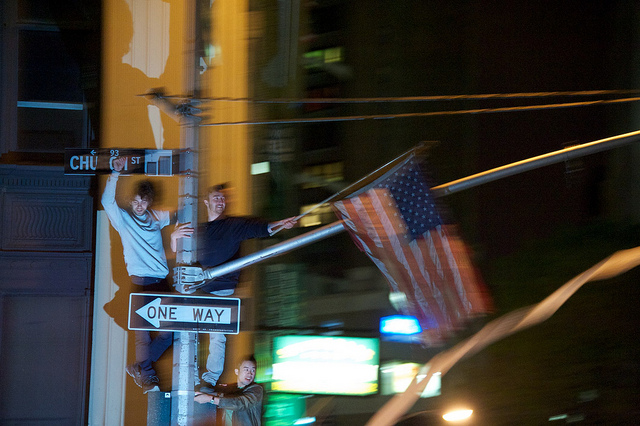 After witnessing the celebrations post news of Osama bin Laden’s death, we ask: what exactly are people cheering?

YOU CAN CHEER if you want.

“The word ‘closure’ is often used at a time like this, when talking about the loss of a family member, and I suppose that is the way for sympathetic people to show their concern. . . . For me, that pain is as strong as ever. There is never ‘closure.'”

The question is what are you cheering?

Are you cheering because you think the world is now a safer place?

Are you cheering for someone you loved who was killed on 9/11?

Are you cheering because this brings closure?

Are you cheering someone you loved who wasn’t killed on 9/11, but some other time, some other war?

Are you cheering someone who wasn’t killed but came back altered somehow?

“I think this is the first miracle of Pope John Paul the 2nd.”

Are you cheering God?

Are you cheering someone who didn’t fight in any war but just did his work or raised her family, and is someone you think of when you think “a good person”?

Are you cheering good overcoming evil?

Are you cheering because you think al Qaeda is damaged?

“. . . what is important is a mass uprising and awakening by millions of Muslim Arabs to get rid of dictators.”

Are you cheering because this changes the “Arab world?”

Are you cheering because it’s easier when there’s a common enemy?

Are you cheering because we have one less enemy?

Are you only pretending to be cheering?

Is it the president’s words you’re cheering?

Is it his delivery?

“I think we can all agree this is a good day for America.”

Are you cheering the person who wrote the words?

Are you cheering the soldiers who fired the shots?

Are you cheering their parents?

Are you cheering all the instructors through the years that taught them how to shoot?

Is it the helicopter pilots you’re cheering?

The technicians who put fuel in the helicopters?

The people who worked in the refineries that produced the fuel?

The factory workers who made the bullets?

The engineers who designed the satellites?

The developers of the imaging software that allowed us to gather intelligence?

The interrogators at Guantanamo?

Was it just the fact that the we live in a country with the power and technology and soldiers that could accomplish this?

Was some of the cheering just for the idea that maybe we’re the only country that could do this?

“One of the dead was Osama bin Laden, done in by a double tap — boom, boom — to the left side of his face.”

That we did this alone?

That it could happen–and be described–like something from a movie?

Are you cheering as a form of payback for those cheering around US soldiers’ and defense contractors’ bodies strung up in Fallujah?

“If there was a better, more effective, or in fact any other way of visiting some penalty befitting their participation upon the little Eichmanns inhabiting the sterile sanctuary of the twin towers, I’d really be interested in hearing about it.”

Are you cheering because you remember people blaming 9/11 victims?

Are you cheering because some moments aren’t meant to be politicized or analyzed and you just have to cheer?

Is part of what you’re cheering that you never really understood Osama bin Laden’s life or his family’s connections with the US, and that it’s all just too complicated and easier now that he’s gone, that this is over?

“[i]n the frenzied days after Sept. 11, 2001, when some flights were still grounded, dozens of well-connected Saudis, including relatives of Osama bin Laden, managed to leave the United States on specially chartered flights.”

Are you cheering just because the moment feels safe and protected and unified with those around you?

Is it something you just feel in that moment, at that place, and it’s impossible to understand unless you were there (although easy to question if you weren’t)?

What is it, exactly, you’re cheering?