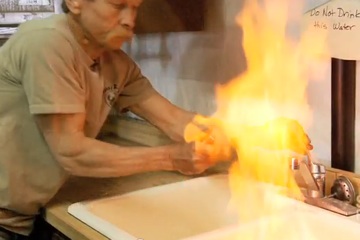 Screenshot of clip from “Gasland.”

When Josh Fox received a letter in the mail offering $100,000 in exchange for the use of his family’s land for natural gas drilling, he did what most of us wouldn’t do: He took off on a 24 state tour of the United States to learn more about natural gas drilling.

He took a camera along with him to document his findings (including the fact that some Americans can set their tap water on fire), and then turned them into the documentary, “Gasland.”

“Gasland,” which won a special jury prize at this year’s Sundance Film Festival, has been selected as one of the features to be shown at the 32nd annual Mountainfilm Festival, which will be held in Telluride, Colorado May 28-31, 2010.

Fox talks about the film in this interview:

Mountainfilm has been praised by photographer Chris Jordan as “simultaneously inspiring, devastating, profound, hopeful,” and by documentary filmmaker Ken Burns as a festival that “reminds us of the force of filmmaking, about things that matter, worlds worth exploring and conversations worth sustaining.”

If you’re interested in attending Mountainfilm and you’re on a budget, the festival is still accepting volunteer applications. If you’re 18 years or older, you will receive festival passes for 16-22 hours of work. More information can be found on the Mountainfilm website.

If you can’t wait til Mountainfilm or don’t plan on going, head over to MatadorTV for incredible videos shot by Matador members all over the world.