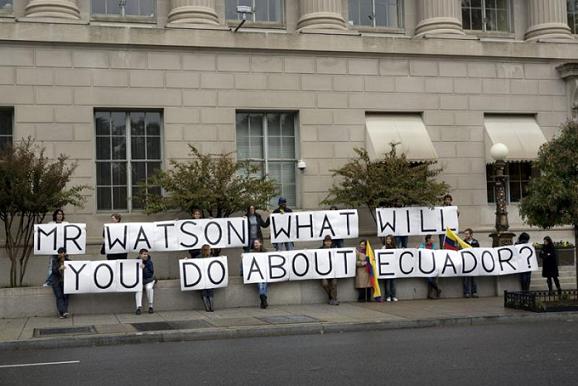 Though we’ve been focused on Haiti earthquake relief efforts, we haven’t forgotten about other issues that deserve our attention.

MatadorChange has been following the ongoing saga of Chevron’s shenanigans since last May, when our colleagues at the environmental group Amazon Watch forwarded us a letter from Emergildo Criollo, a representative of the Ecuadorean community of Cofan, which has been devastated by Chevron’s oil extraction activity.

We’ve written several articles about Chevron and other big oil interests, including Shell, since that time, and we’ve been following developments in what has been called the largest class action environmental lawsuit in history.

Amazon Watch notified us recently that Chevron has a new CEO. On January 1, 2010, John Watson, Chevron board member, was appointed head of the company.

With more than 30 years of his career invested in Chevron, environmentalists critical of the appointment wonder whether Watson can really lead the way in cleaning up the company… not to mention the countries and communities it has harmed.

“…John Watson is the very man [who] orchestrated Chevron’s takeover of Texaco, and with it the 18 billion gallons of toxic waste water and 17 million gallons of crude oil deliberately dumped in Ecuadorian rainforest communities. Given Watson’s intimate understanding of Chevron’s toxic legacy there is no question he knows what is necessary to clean up their mess and compensate the communities that have been living with the effects of Chevron’s contamination for decades.”

Magel went on to issue a challenge, asking “Will Watson build a tenure on human rights or legal fights?”

Amazon Watch has released a video of Ecuadorean people who ask Watson to take charge and lead Chevron in a new direction. You can watch that video below, and then read on to learn about the petition campaign led by Amazon Watch and how you can get involved:

The petition being led by Amazon Watch reads as follows:

As the new CEO of Chevron, climate change and the environmental and human rights impacts of Chevron’s operations are the two issues that will define your tenure at the helm of one of the world’s largest oil companies. Chevron has fallen behind other businesses and many political leaders already taking a leadership position on climate change. Furthermore, your company is drawing increasing criticism for failing to rectify its massive human rights and environmental disaster in Ecuador. Taking the following steps will demonstrate a true commitment to environmental responsibility and respect for human rights – which will only strengthen your company’s future.

We the undersigned call on Chevron CEO John Watson to:

Develop a global environment and human rights policy that will prevent similar tragedies in the future.

Educate yourself about oil! What Cuba Taught Us About Peak Oil is just one article from our archives that addresses oil as a dwindling resource.