Every day, skilled professionals are volunteering around the world to solve–or at least alleviate–some of humanity’s most persistent problems.

Doctors Without Borders provides medical assistance in areas where health care is limited or non-existent. Share Our Strength is just one of many organizations whose volunteers and paid staff make sure people in need receive food. And the International Red Cross tries to ensure that displaced people are given shelter.

But what about other needs–the ones that aren’t so obvious because they’re not considered basic to our survival? Who’s making sure these needs are met?

One answer: Clowns Without Borders. 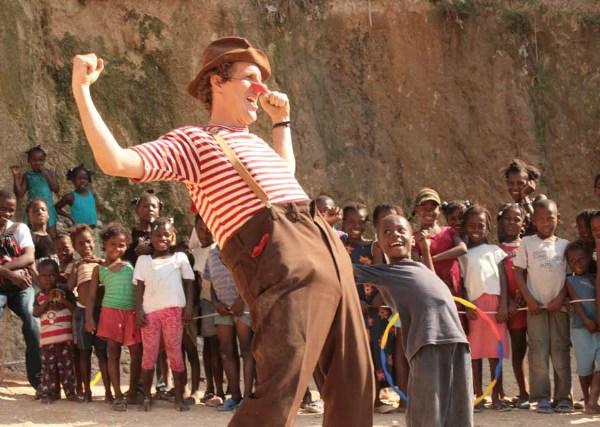 Clowns Without Borders was founded in Spain in 1993 by Tortell Poltrona, a professional clown who had been invited to perform at a refugee camp in Croatia. While clowning before an audience of more than 700 children, Poltrona had his “Aha!” moment: he realized that laughter could be just as powerful and necessary a force as medical and food aid.

Today, Clowns Without Borders has branches in nine countries, including Belgium, Canada, France, Germany, Ireland, South Africa, Sweden, Switzerland, the US, and its members have performed in refugee camps in Europe, South and Central America, and Africa.

According to the organization its mission is to:

…offer laughter to relieve the suffering of all persons, especially children, who live in areas of crisis including refugee camps, conflict zones and territories in situations of emergency.

We bring levity, contemporary clown/circus oriented performances and workshops into communities so that they can celebrate together and forget for a moment the tensions that darken their daily lives.

To see the clowns in action, take a few minutes and enjoy this video of CWB clowning around with kids in Africa:

Clowns Without Borders isn’t the only organization spreading laughter and fun as a form of relief. Check out Matador organizational member, Free Flight, a Brazilian-based circus school project that works in conjunction with the Rotary Club. Their mission? “To involve youngsters from the age of 6 – 18 to practise circus arts, with the objective of taking them off the streets away from the dangers of drug trafficking and prostitution, and returning to them a childhood long forgotten or never lived.”