The image of the frail 89 year old man being removed from his home in a wheelchair by Immigration and Customs Enforcement agents was a disturbing one:

Clearly moaning in pain and surrounded by tearful family members, including a 10 year old grandson, it was hard to imagine why the agents would show up in force to remove John Demjanjuk from his home.

But the photos and video footage alone could not explain the backstory about Demjanjuk, a Ukrainian immigrant to the US who is accused of being a Nazi guard and accessory to the deaths of more than 29,000 people during the Holocaust.

Demjanjuk’s story is a complicated one. Tried and convicted of war crimes and crimes against humanity by an Israeli court in 1988, Demjanjuk’s conviction was subsequently overturned by Israeli Supreme Court. Then, a US judge revoked his American citizenship in 2002 after learning that Demjanjuk had concealed evidence about his service in the Nazi camps. Three years later, an immigration judge ruled he could be deported to the Ukraine, Poland, or Germany, where a warrant has been issued for his arrest. Yet four years later, Demjanjuk was still living at his home in Ohio.

Until yesterday, when ICE agents seized him and prepared him for deportation. But then, a surprise twist– three judges with the 6th US Circuit Court of Appeals granted a stay on the deportation order just six hours later.

It remains to be seen what will happen with Demjanjuk, whose family claims, somewhat ironically, that deportation would be “torturous” for a man in his condition.

Though the image of Demjanjuk being wheeled out of his home is one that evokes some degree of pity, one has to ask whether age should ever impose a statute of limitations on our sins.

The question is one gaining increasing relevance, and not just because of Demjanjuk. 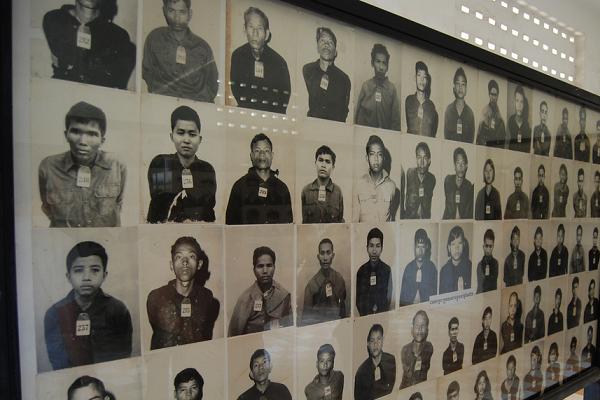 In a March episode of the news broadcast, “World Focus,” it was reported that Cambodia had initiated a trial of Kaing Guek Eav, the man who ran the notoriously brutal Tuol Sleng Prison during the Khmer Rouge regime.

Kaing Guek Eav, now in his late 60s, is a self-proclaimed born-again Christian who seems harmless with his watery eyes, wrinkled face, and slightly stooped posture. Yet he is charged with aiding and abetting the deaths of more than 15,000 Cambodians during the 1970s. Family members of victims have shown up by the hundreds to witness the trial, and have described the process as cathartic because justice is finally being served.

What do you think? Legal considerations and mandates aside, is there a moral or ethical statute of limitations on our sins? Share your opinions below.