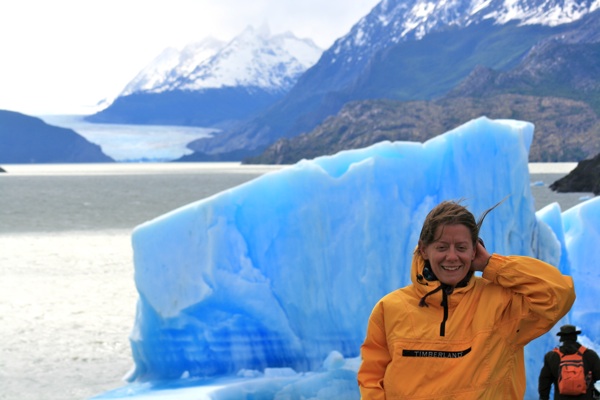 The very cold & very windblown author in front of an iceberg in Chilean Patagonia. While posing for the photo, a large chunk of the berg sheared off and began floating away.

If you think the news out of Copenhagen is discouraging, just wait: it gets worse.

Maybe you’ve been following news coming out of the international climate change conference in Copenhagen, which wraps up later this week. With the end of talks slated for December 18, UN Secretary General Ban Ki-moon said earlier today that world leaders “face a defining moment in history” as they decide whether to commit their countries to serious, significant environmental protection policies related to climate change.

Many observers are pessimistic about that possibility, as talks about climate change have gotten stuck on issues related to the divide between rich and poor nations.

If that’s not discouraging enough, there’s been disturbing evidence that the climate change problem is accelerating at a pace that’s even faster than we once thought.

Last week, the international news outlet France 24 reported that a “monster iceberg” has been spotted drifting toward–of all places–Australia. The 12 mile long slab broke off a larger berg about a year ago and has been making a slow but steady drift toward Australia.

If you’re curious about what that might look like–and what implications it might have–check out this 2008 video of a Newfoundland iceberg collapse, found by Eva Holland and reposted on World Hum last week:

Want to see what climate change looks like around the world? Check out Abbie Mood’s article, Explore Climate Change With Google Earth.