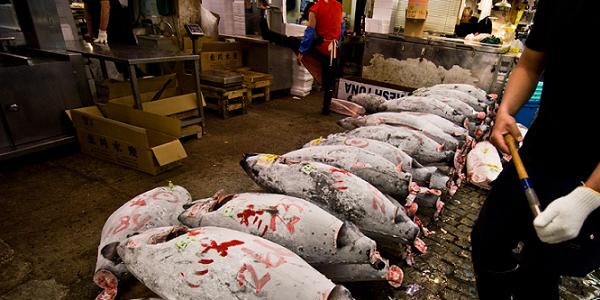 In the car industry and looking for a job? Try Mitsubishi; they might be hiring.

The Independent reports that Mitsubishi, worried about its future in the auto industry, is making a move into a secondary market: the fishing of bluefin tuna.

According to the article and the soon to be released documentary, “The End of the Line,” Mitsubishi is responsible for supplying almost 40% of the world’s tuna. The company itself told The Independent that it “handles between 35 per cent and 40 per cent of Atlantic and Mediterranean bluefin tuna imported to Japan….”

The move is a brilliant business strategy. Though the market price of tuna tanked last December, economic analysts predict the price will start to rise exponentially as the availability of tuna–as with many other fish species–becomes increasingly limited. Mitsubishi, which has been freezing much of its supply, will then be able to release the in-demand fish to a market ready to pay a handsome price for the delicacy.

While Mitsubishi seems all but assured to make a tidy profit in the long-term, it’s already fending off criticism from environmentalists who charge the company with contributing to the perils of overfishing.

To learn more about overfishing, visit Greenpeace’s overview of this problem. And to learn more about how you can make sure your seafood buying practices aren’t contributing to the problem, check out this useful guide from the Blue Ocean Institute.

And if you’re interested in seeing “The End of the Line,” here’s the trailer. The film opens on June 8, 2009, World Oceans Day:

Know which fish are environmentally friendly? Good. Now check out Turner Wright’s guide to ordering sushi like a pro.