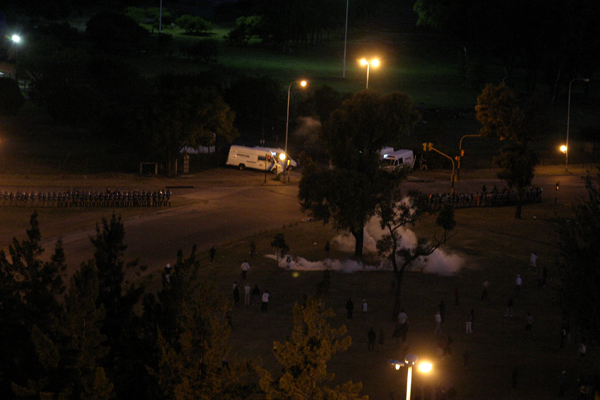 Plumes of tear gas rise from the ground.

I had to get out of here today.

I went to see a movie and when I got home, Seba met me at the bus stop. Before I even got back, he told me where I had to get off. Traffic is halted on Escalada again, and the bus was rerouted. I was wrestling with my guide, trying to figure out which intersection when I saw him through the bus windows.

As we walked toward the house, we saw a woman in the street screaming at a Bolivian family with a baby and two little girls. They were just walking somewhere, and this woman followed them for 30 meters screaming how they should go back where they came from. They didn’t say anything, and later she loudly argued with some other people in the street.

While we stared at the crazy, a young woman approached us and asked us what was going on. There were tears in her eyes. She said she just can’t believe what’s happening and said she was really glad to talk to a couple people who made any sense at all.

Instead of going straight home, we went over by the traffic circle. We saw the same woman who had been yelling at the family laughing loudly in a group of friends. Clumps of people stood looking toward the police barrier outside the park. A group of about 50 youth, one on a horse with a flag who we saw yesterday, were chanting and yelling.

Seba wouldn’t let me take out my camera then. It’s his neighborhood, so I deferred to his judgement.

All through the center of the huge traffic circle, people stood watching as the kids threw rocks at a small group of journalists who went running past the police barricade down by the nearby apartments. One shot a firework and hit a cop. We saw him hobble off behind a truck, assisted by another cop. The police discharged tear gas and the kids dispersed. 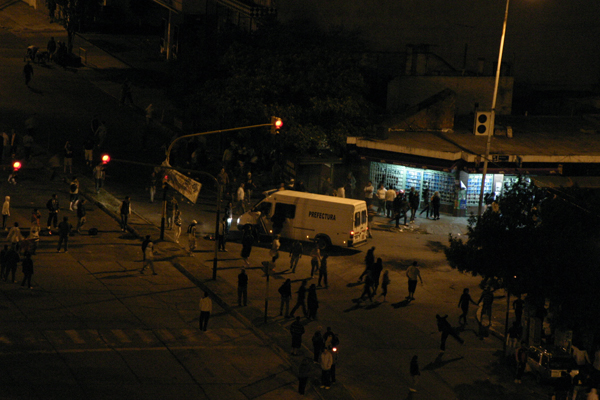 Youth of the area attack a Prefectura truck. As far as I can tell, the Prefectura is like the Coast Guard.

We went up to Seba’s mom’s apartment and tried to take pictures from the roof, as far away as everything was and as dark as it was, they didn’t come out very well. People within the traffic circle set off fireworks, shooting them at the police.

We watched as a group of young men attacked a police truck over by the kiosco. The police advanced and started discharging tear gas. Giant clouds of it plumed from the ground over and over again. They formed a line that spanned the entire traffic circle. Reinforcements came. The kids continued throwing rocks. This went on for a couple hours and has now apparently ended for the night. 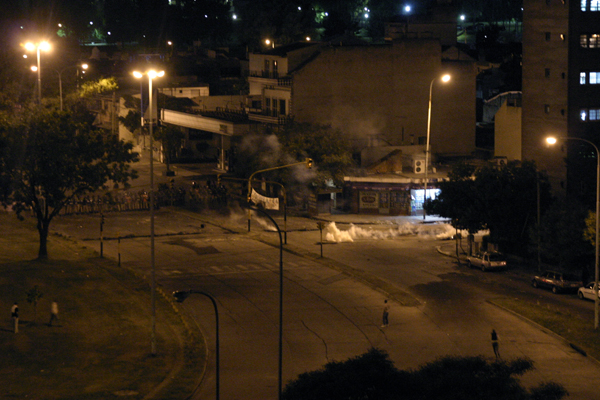 The police are under orders not to detain anyone.

We went downstairs. On the other side of the traffic circle, more kids set a dumpster on fire. We kept hearing the loud pop of the tear gas canisters being shot at the kids where they continued to lob rocks toward the cops in their gas masks and riot gear.

As we walked home, there were people in every building banging pots and pans. Some chanted and yelled, some waved flags out their windows. 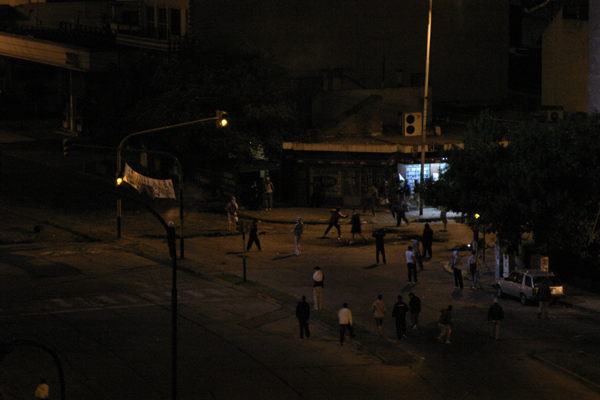 Kids throw rocks at the Prefectura who are in full riot gear.

Pagina/12 reports there are as many as 4,000 people in the park now. The television news showed more people moving into the park today; a man with a shopping cart full of wood declared his intentions to build a house. The reporter interviewing him practically rolled his eyes. As I get ready to hit the publish button on this piece, helicopters fly overhead, making a lot of noise. It’s almost 11:30PM.

The racism and xenophobia are appalling. I am really at a loss. It seems like everyone who is out there showing their face has something ignorant to say. I can only hope that the silent majority of reasonable people are in their apartments, hoping for the best. I find it very hard to understand how people in a nation of immigrants can have such violent feelings for immigrants. But I’m from the US, so I guess I shouldn’t be surprised.

A Great White Shark That Attacked in California May Be One of the Biggest in the World
Visitors To Niagara Falls Can Get a New, Never-Before-Seen View From a 100-Year-Old Tunnel
Airbnb Wants To Give You $100,000 To Design an Epic Vacation Rental
Flight Prices Are Up 40 Percent Since January. Here’s How Much Higher It’ll Get This Summer.
50% of Canadians Live South of This Line