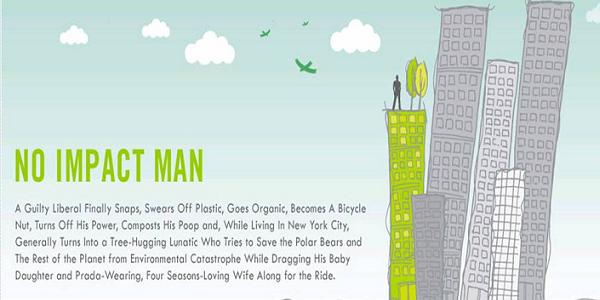 I’m going to assume–and maybe I’m wrong, but I hope not–that if you’re a regular Matador reader you’re interested in living a conscientious life, making a minimal negative impact on the environment and a maximum positive impact in your community.

But would you go as far as Colin Beavan, a.k.a. “No Impact Man”?

Beavan, who lives in New York City, describes himself as

“A Guilty Liberal [Who] Finally Snaps, Swears Off Plastic, Goes Organic, Becomes A Bicycle Nazi, Turns Off His Power, Composts His Poop and, While Living In New York City, Generally Turns Into a Tree-Hugging Lunatic Who Tries to Save the Polar Bears and The Rest of the Planet from Environmental Catastrophe While Dragging His Baby Daughter and Prada-Wearing, Four Seasons-Loving Wife Along for the Ride.”

In November 2006, Beavan decided to undertake a radical personal project: he’d spend the next year reducing his environmental impact as much as possible. He’d swear off shrink wrap and subways. He’d take stairs instead of elevators or escalators. He’d try to trim his waste to zero. He’d buy local, eat organic, and, yes, compost his poop.

A project of this magnitude is game-changing for sure, and there’s no way his wife and young daughter would be able to go along for the ride without being deeply affected.

That’s what made directors Laura Gabbert and Justin Schein interested in turning Beavan’s experiment into a documentary film, which will be released in New York and Los Angeles on September 11, followed by other cities around the U.S.

I caught the preview for “No Impact Man” this weekend and can confirm that the Prada-wearing, Four Seasons loving wife was stretched to her limits by Beavan’s experiment to live more conscientiously. But the question left dangling in the air is whether Beavan’s experiment ultimately achieves its goal and brings his family closer in the process:

What do you think? Does Beavan seem to have gone to extremes with his low-impact living experiment, or is he right on? Share your thoughts below!

Wonder how your consumption affects the environment? Read “Is Water the New Oil? Global Water Consumption Doubling Every 20 Years.”