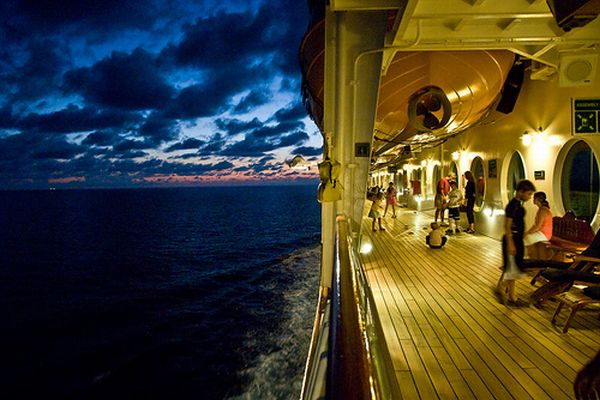 As if cued to add fuel to the environmental debate that erupted on Twitter recently, the new “world’s largest passenger vessel” docked at its home port in Florida for the first time just a few days after.

Royal Caribbean’s “Oasis of the Seas,” finished in October of this year, is 40% larger than its closest rival for size. With a passenger carrying capacity of 6,296 guests plus 2,165 crew members (for a grand total of 8,461), it could house 80% of the entire population of Sarah Palin’s hometown of Wasilla, Alaska.

If you asked me to do a word association with “cruise,” my immediate response would probably begin something like: waste, drunk, exploitation, gambling. Funny enough, the Royal Caribbean management at least partly agrees with me.

After all, “Oasis” practically brags about the amount of resources and commodities it consumes on a daily basis. Its fact sheet reads like a guide book to wastefulness. These are some of the so-called “Fun Facts” about the ship found on their website:

In addition to the vast quantities of non-renewable resources consumed to build the behemoths, cruise ships produce a lot of waste themselves. An environmental activist group called Oceana reports that the average cruise ship produces daily:

I’m not sure what oily bilge water is, but it can’t be good.

In some ways, the environmental damage possibly caused by cruising on the “Oasis” isn’t actually so drastic. When you consider the fact that, if they weren’t on a cruise, those 8,000 sailors would be consuming goods, services, and water elsewhere, the numbers don’t seem so dire. 4.7 million pounds of water works out to around 70 gallons per person – within the normal range of the average American’s daily home water consumption (not to say that isn’t still egregiously high).

At least a cruise ship has the opportunity for reducing consumption per capita through economies of scale. Some of that water used (though likely a tiny fraction) surely goes to water the ship’s 12,175 live plants. And in the last decade most cruise companies have made an effort to clean up their business. They have updated ships with advanced sewage treatment facilities, improved emissions systems, and have begun plugging into hydroelectric power sources while docked at port, rather than running their engines.

But cruise ships can be damaging in other ways.

For one, they can cheapen and degrade local cultures. Let’s be honest: cruise-goers on a 7-day cruise Caribbean cruise aren’t looking for a cultural immersion experience. “Oasis” stops in Jamaica, Haiti, and Cozumel, Mexico for 29 hours. Total. That’s 29 hours out of 168, or about 17%. 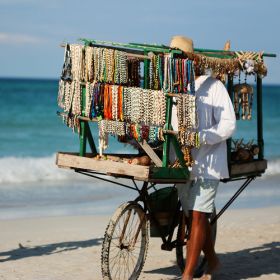 Think of what happens when a boat carrying over 6,000 passengers pulls up to port after being at sea for two days straight. They all pour out onto the island to shop, eat, and drink their way through local towns.

Time for a little honesty again: thousands of cruise-boat tourists on shore for eight hours aren’t going to buy a hand-woven scarf or take the time to get to know the people they’re buying from. Chances are they’ll buy cheap trinkets that were more likely than not made in a factory in China and only resold locally.

What do you think will happen when that local scarf-weaver realizes that they can earn more money from selling cheap Chinese trinkets than making textiles?

Cruise ships, for better or worse, cater to the most attention-span-deprived among us. Cruises are often an all-inclusive package deal; your ticket pays for your room, your meals, all the endless entertainment your heart can take, and sometimes soft drinks and alcohol.

“Oasis” is no exception.

As the world’s largest passenger boat – almost five times larger than the Titanic – it is expected to have a commensurate level of attractions. It doesn’t disappoint. It has so many amenities, in fact, that USA Today’s “Cruise Log” even asked: “Is Oasis of the Seas too complicated for a first-time cruiser?”

But all of those diversions come at a cost. Tourists who are coddled and satisfied by cruise staff for several days straight, then suddenly released into the laid-back culture of a Caribbean island, are probably not going to be the most patient or understanding people in the world.

Surely all cruise-goers aren’t environmentally ignorant nor culturally unaware. People cruise to escape from the stress and pressure of the daily grind, and to have everything taken care of for them, which doesn’t make them greedy or insensitive.

But a cruise ship – especially one like “Oasis” that touts itself as a floating city, complete with seven different themed “neighborhoods” – doesn’t do much to encourage cultural awareness.

The least they could provide their guests is a little cultural education to go along with their all-you-can-eat buffet.

Did you miss the Twitter debate on cruising? Read Julie Schwietert’s article, Should Travel Writers Care About Their Environmental Impact?

[poll id=”18″]
What did you think of this article?
Meh
Good
Awesome
Bookmark
Posted In
Activism Sustainability