I HAD HEARD about the sulfur miners of Ijen before I arrived in Banyuwangi, a town on the eastern edge of the island of Java. Not many tourists visit this town, and finding information in English was tough. Some people told me access to the mountain was closed. Others knew nothing about what went on there, even though the volcano rose right behind their homes. Buses did not run there, and taxis were expensive.

So the next morning, I set out hitchhiking. A girl on a motorbike left me at an intersection close to the volcano: “Wait here, a truck will come with all the miners,” she said. After 15 minutes, the vehicle arrived. I boarded the truck with the miners, and we traversed the east face of the volcano.

My expectation was that the place would not be touristy at all. I was wrong. After we arrived at the trailhead, tourists seemed to be everywhere. They had come up the west face, paying a significant amount of money for the opportunity.

Here is some of what I saw. 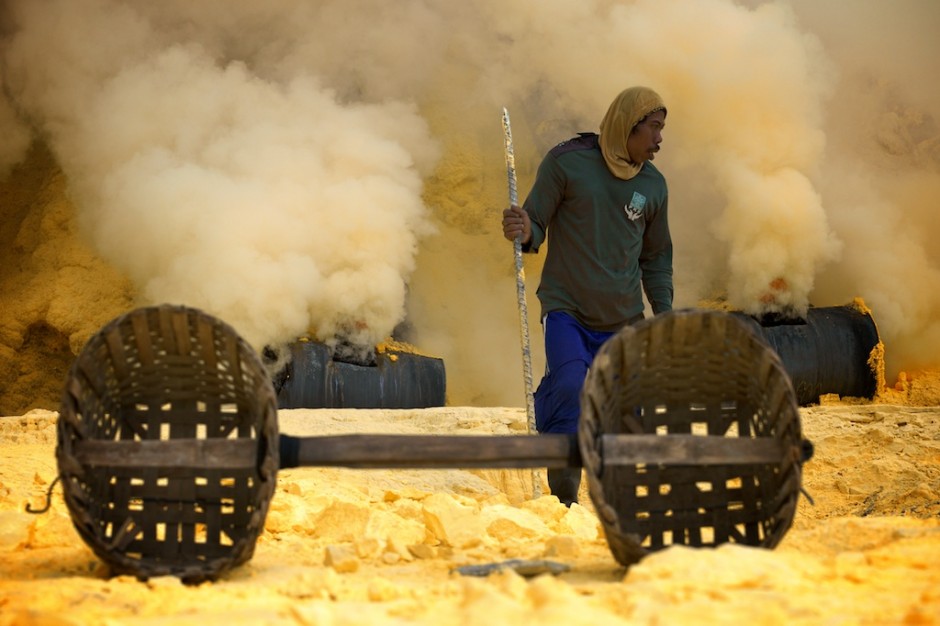 The sulfur miners are the lead characters in an inhuman theatre. They are not only exploited as miners, but also as a tourist attraction. Their day starts at 6am, 15km from the base of the 2800m Ijen, where a truck waits to pick them up. After 7km the road ends. Each miner is charged 2,000 Indonesian rupiah (roughly 0.20 US dollars), and the fee is handed over to the truck driver. 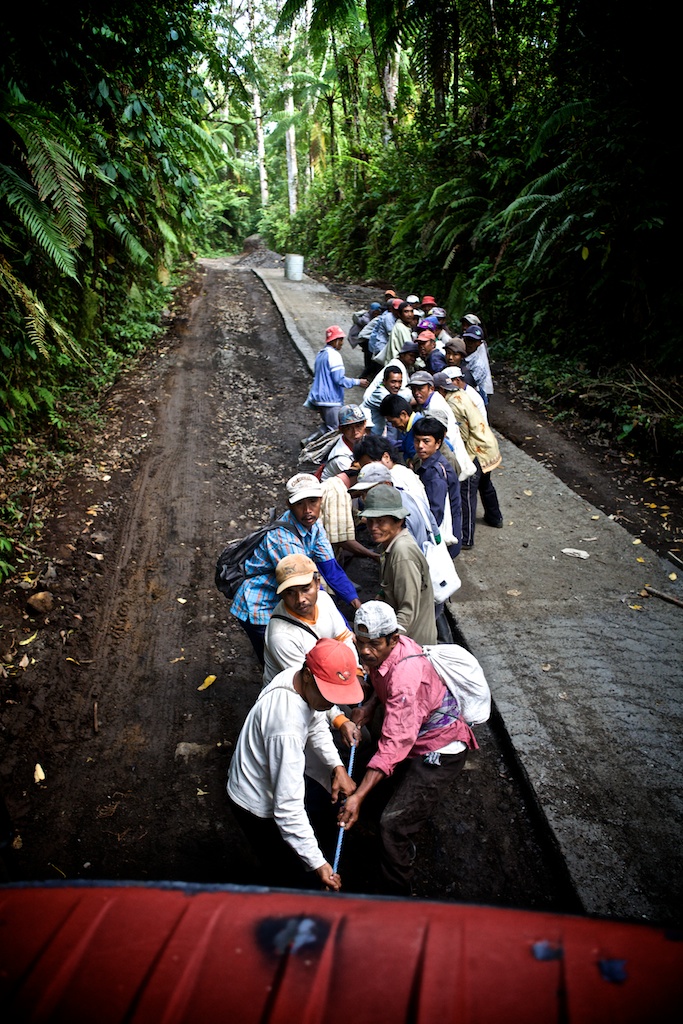 The road up the mountain is in ruins, making the short drive from town to the volcano's trailhead a nightmare. The miners often must jump out and help push the truck out of holes and crevices. After disembarking, everyone starts talking and pointing out the way through the jungle in order to guide the less experienced participants over 1km of hard walking. At the end of this leg, another truck is waiting to transport the miners further up the mountain, requiring them to pay another 2,000 rupiah. 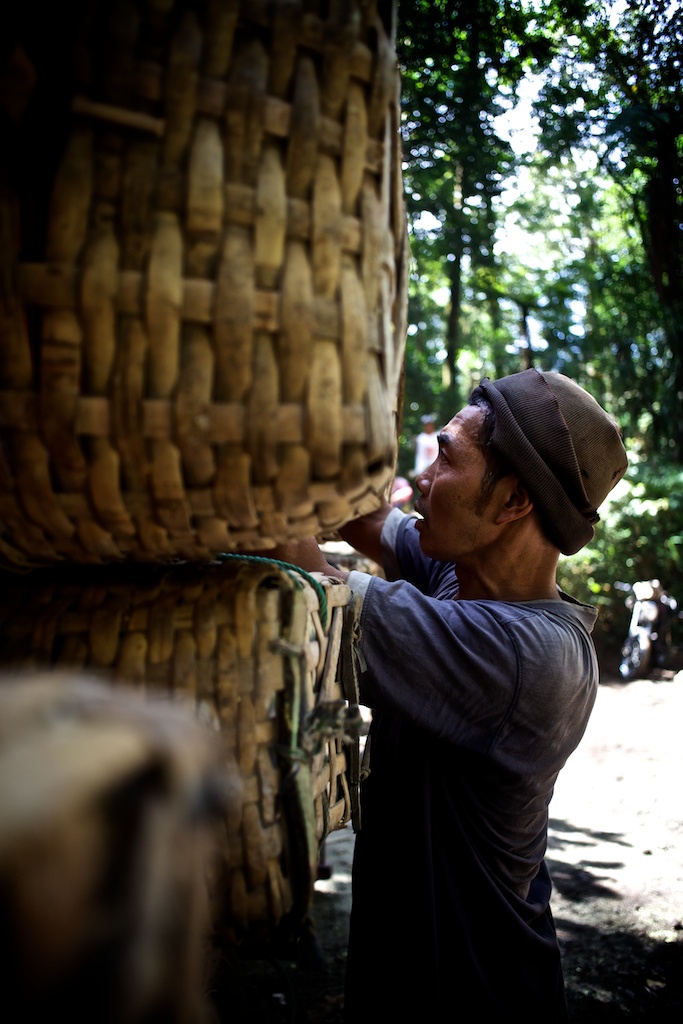 A miner organizes the baskets on one of the trucks before the procession continues up the mountain. 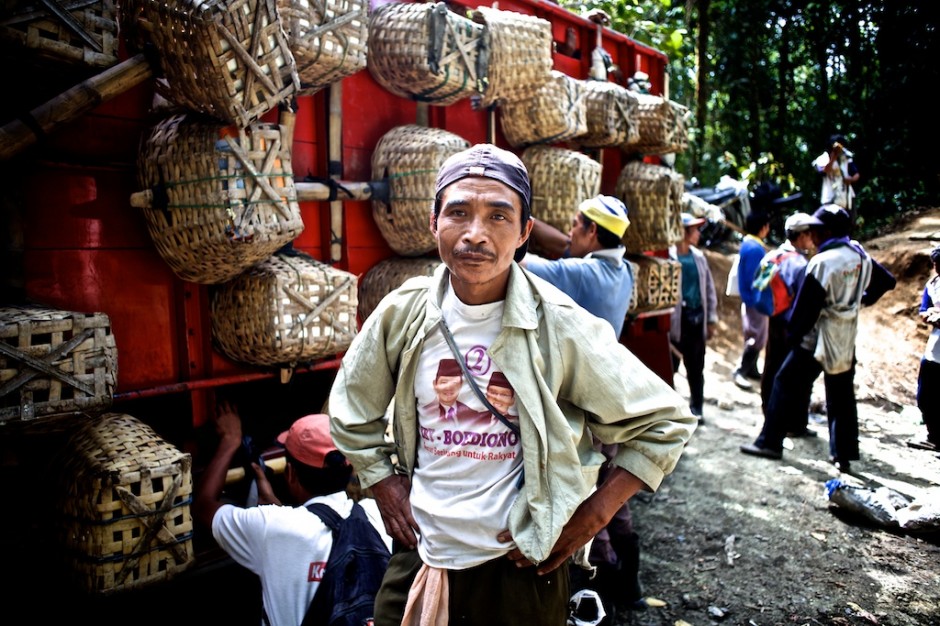 A miner gets ready to board the truck. 20 minutes till destination. 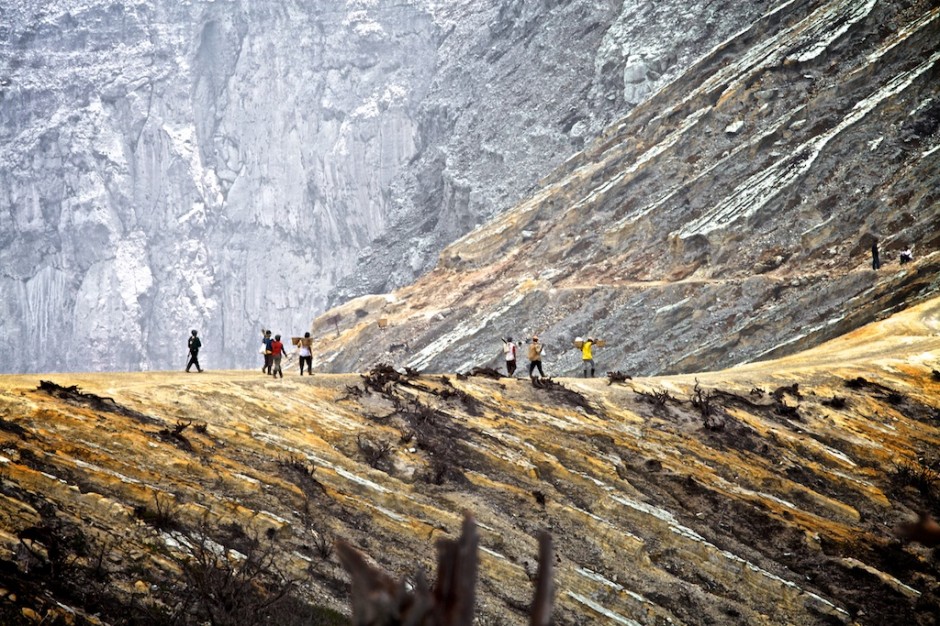 It’s already 7:30 by the time they reach the trailhead, from where it’s another 4km to reach the summit of Ijen’s crater. The miners cover this distance walking as fast as they can, carrying their empty bamboo baskets with them. 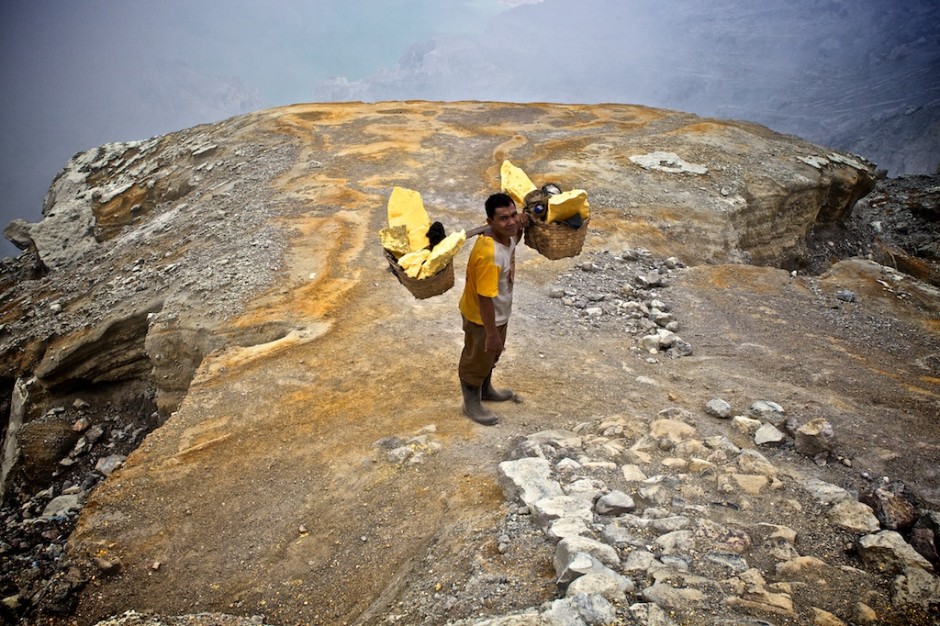 Some miners sleep on the volcano so they can wake up early and make three sulfur runs down into the volcano and back. Here, it's not yet 8 in the morning and miners are already emerging from the heart of Ijen. 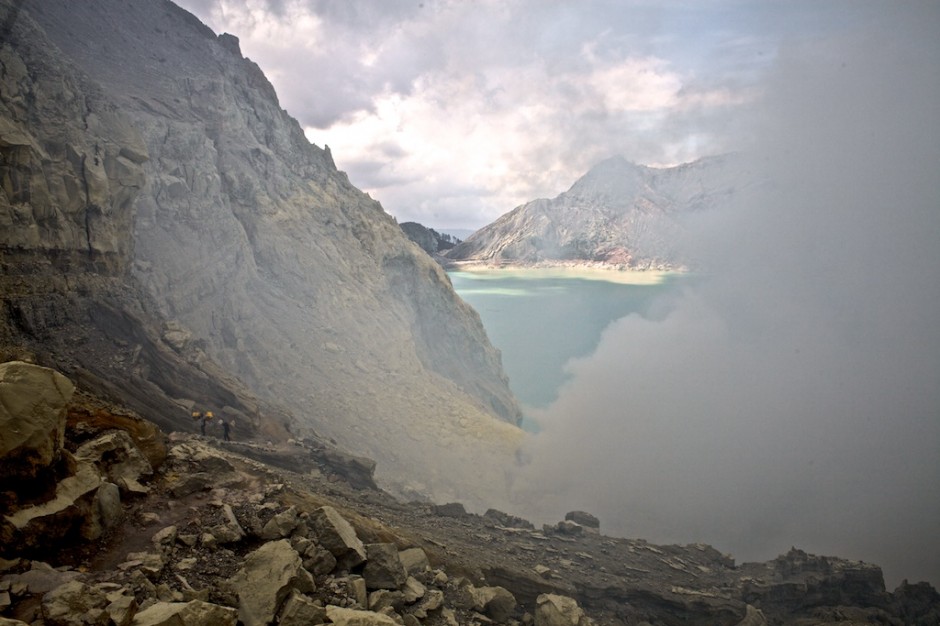 Once at the top, they are met by a breathtaking view, some consolation for the long trip. Sulfur smoke fills the air. Depending on the wind’s direction, one can see a magnificent cerulean lake resting in the heart of the crater. 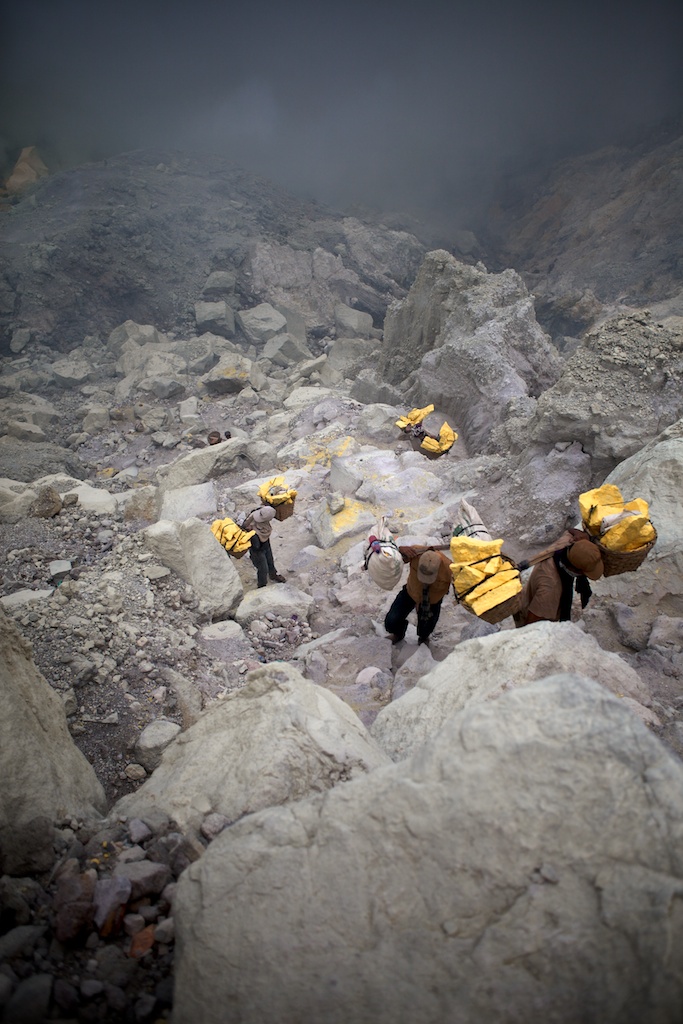 Miners scramble from the bottom of the crater to its rim, a 1km trek. Breathing is difficult, and each basket has an average weight of 80kg (175lbs). 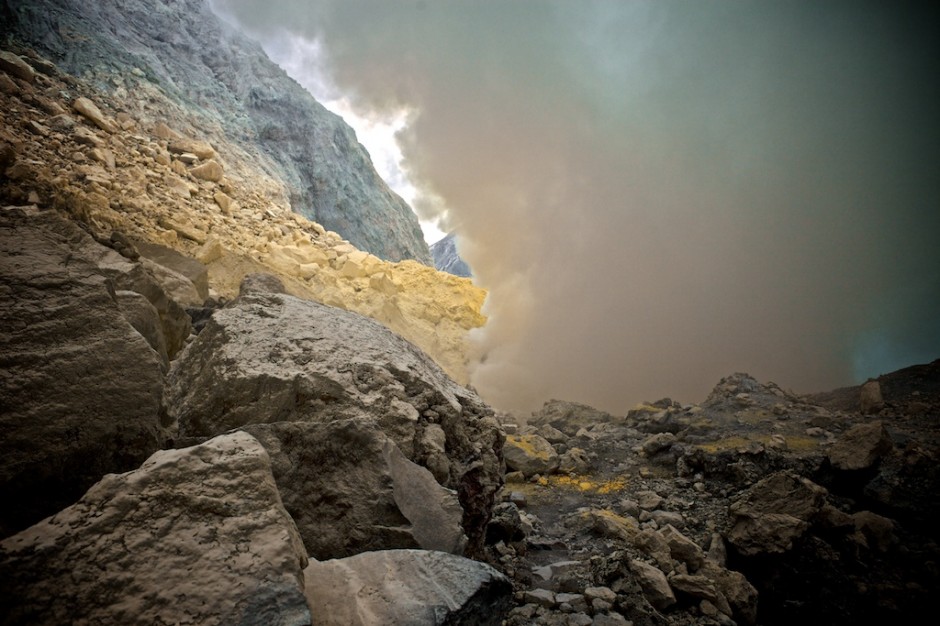 On the way down into the crater, a sign warns wannabe-adventurers with the words: “Dangerous: To go down is forbidden.” Near where the miners actually harvest the sulfur, the smoke gets very intense. It doesn't allow you to see where you're walking, which can be quite dangerous. The only thing they can do is stop and wait for the wind to blow in a different direction. 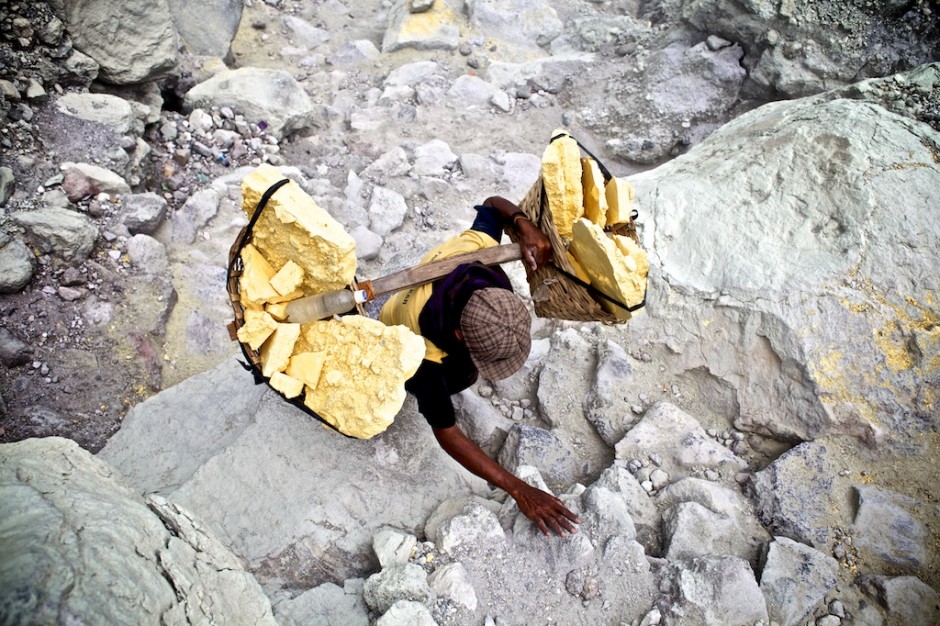 A miner ascends. They carry empty water bottles, hoping some tourist will top them up. The path is steep, rocky, and ripe with foul-smelling toxic gases -- the miners disappear and reappear right into it. Some are more prepared than others. A few have masks, others have proper boots, yet most seem sadly ill-equipped. 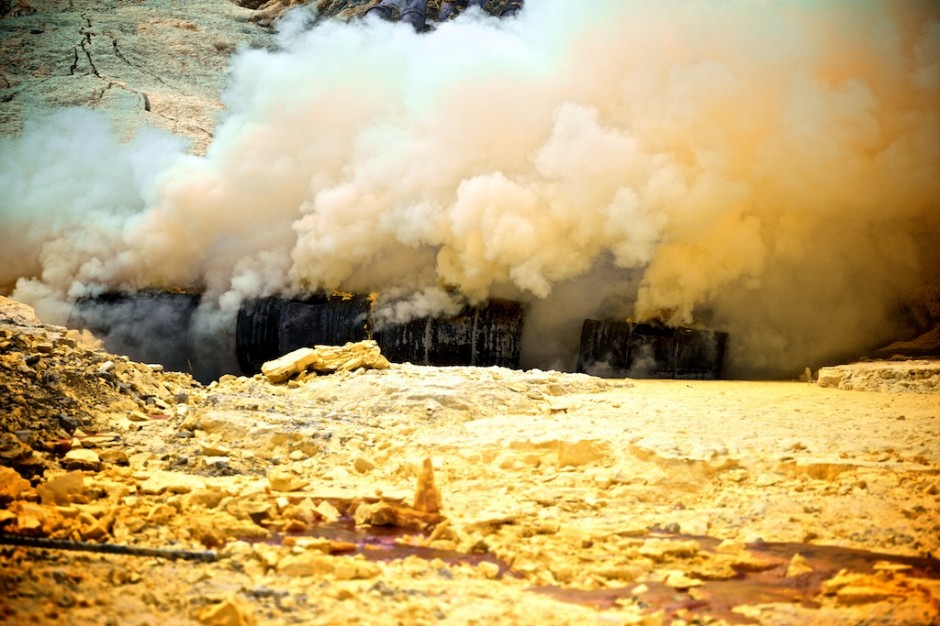 The molten sulfur emerges from the pipes deep red, and gradually turns an eerily vibrant yellow as it cools and hardens. The echoes within the crater as the miners work are ten times what they are at the top. The acoustics are like those of a concert hall -- every sound within is amplified and can be heard clearly. 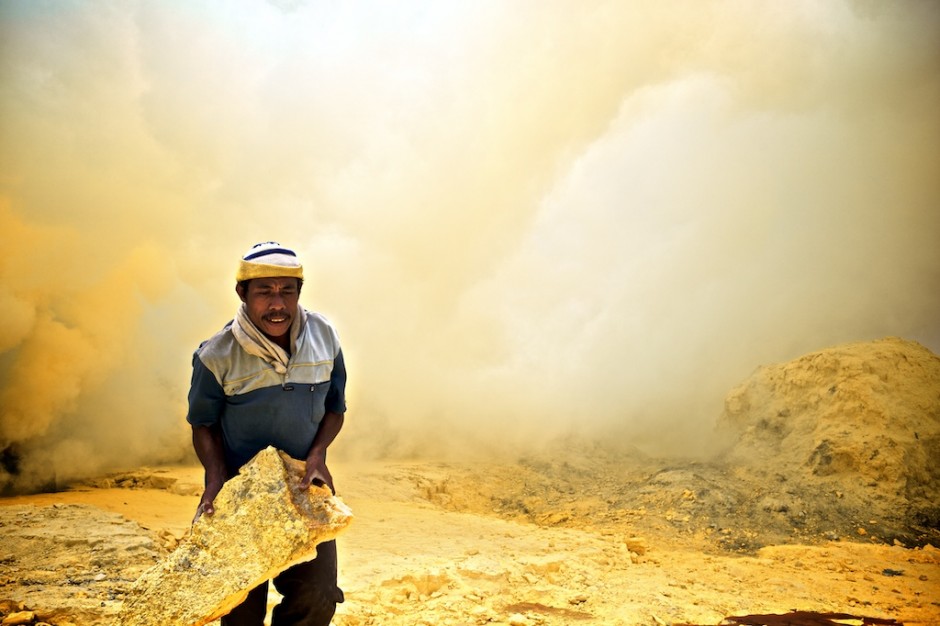 Big sulfur chunks are removed from the pool so they can be fractured into manageable sizes -- this is typically done by hitting them with rocks, since the miners lack proper tools. Whilst climbing down, one can hear the miners' coughs and moans -- it’s a cliché to compare the scene to Dante’s Circles of Hell, but the resemblance is there. There isn’t sufficient oxygen, and the smoke is extremely toxic. 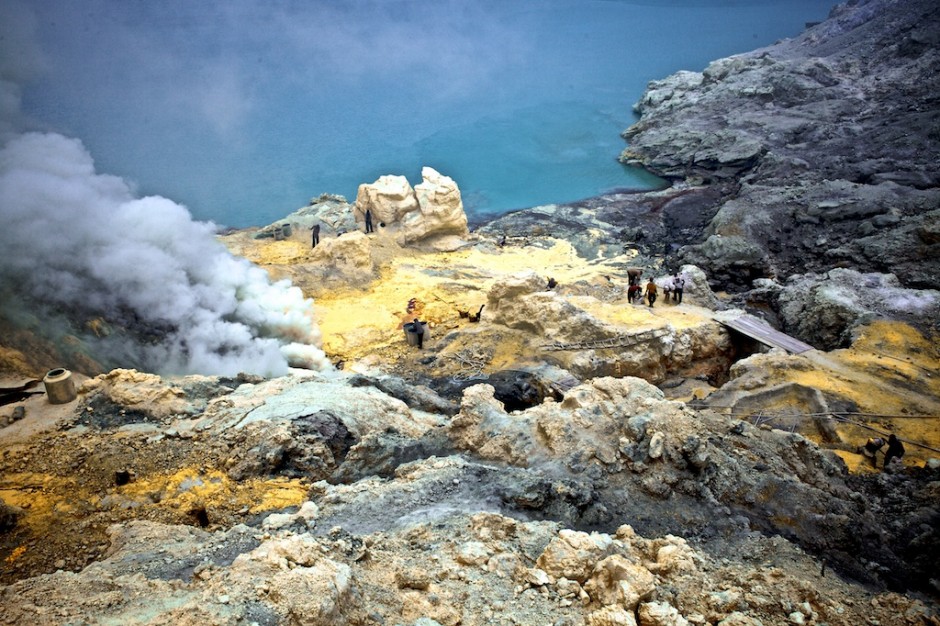 The crater lake is filled with a solution of sulfuric acid and hydrogen chloride at a temperature of about 33C (91F). Once at the water, the flaxen yellow sulfur is waiting for the miners. It normally takes at least an hour to cut the sulfur and load it into buckets. Then the day turns truly inhuman. Miners must carry loads ranging in weight from 75 to 90kg the entire 5km back to the 4WD track. 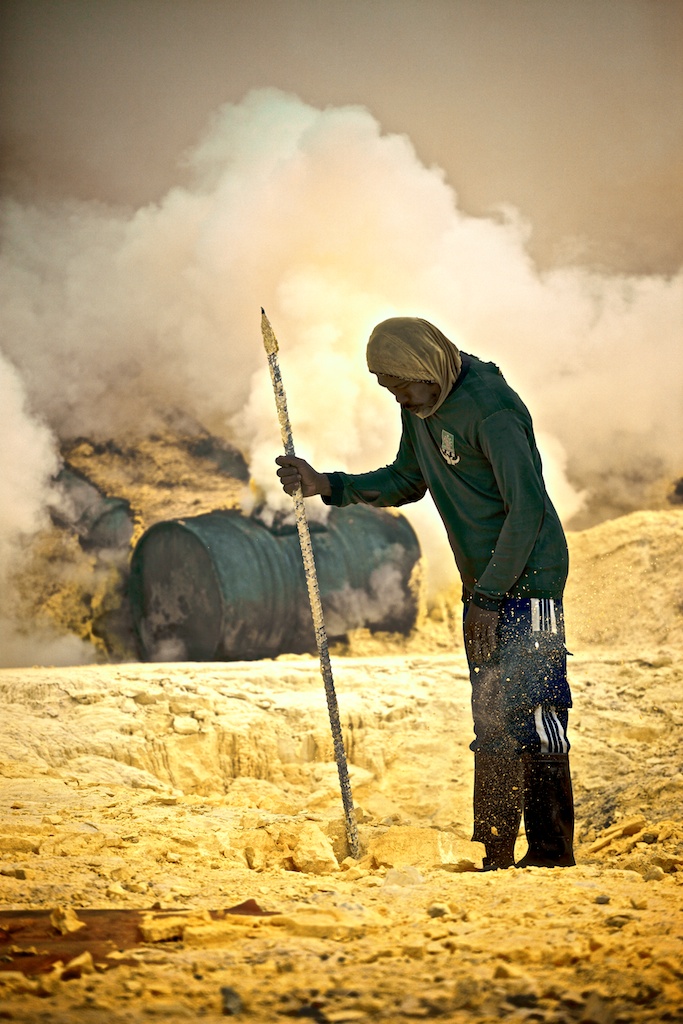 The miners escape the smoke as fast as they can. To breathe within it is almost impossible. This is one of the most toxic places on the planet. Among this desperate group are men of all ages working for their daily wage. Solidarity does not seem to exist, and each one has to take care of and carry his own load. 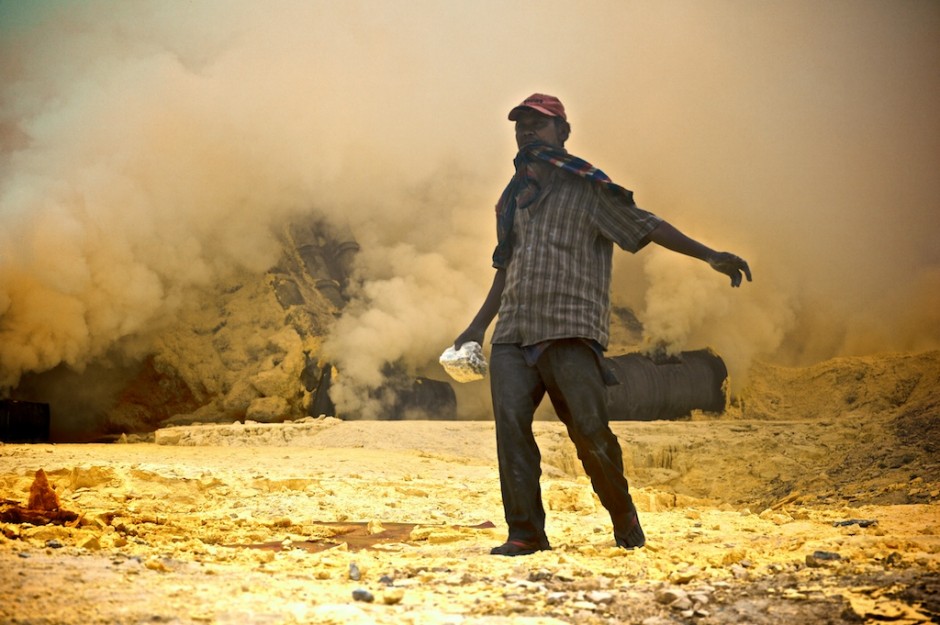 Flip flops and a scarf

The majority of miners have no masks, gloves, or boots. As a bare minimum, they put a piece of wet cloth over their mouths to make it at least a little easier to breathe. Some miners are able to complete the circuit twice in a day, and a handful go for three. There's not enough water to drink, and towards the end of the day they'll regularly ask tourists for water rather than money. 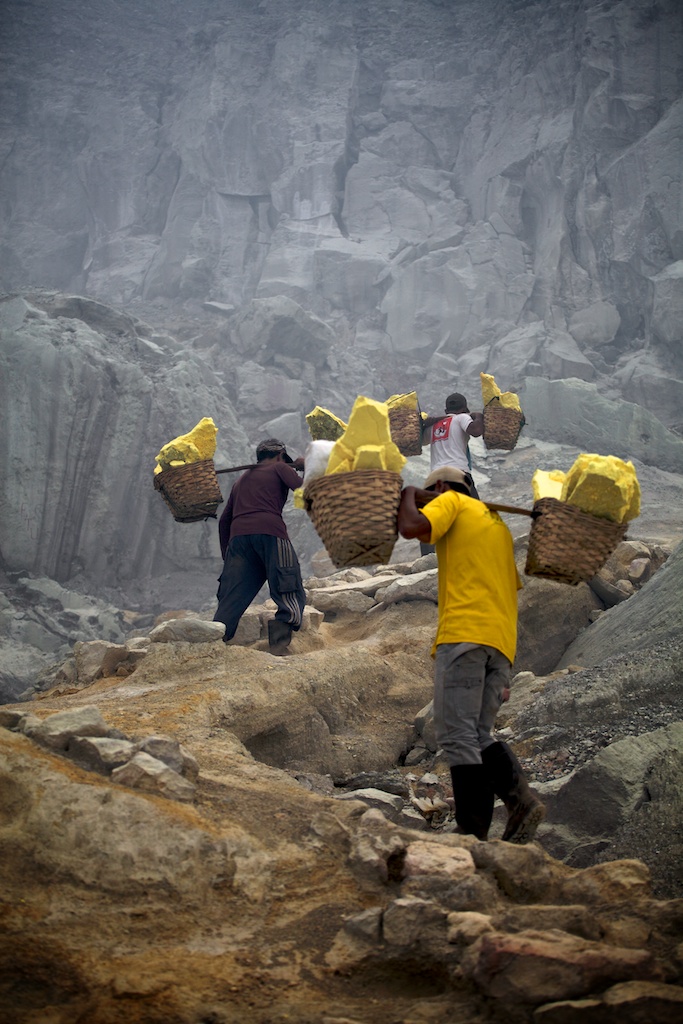 The trek with full baskets is incredibly challenging -- the miners will stop several times to rest. It takes a long time to finally break free of the volcano's gases. As a result of the weight, many workers suffer terrible injuries to their back and shoulders -- the distinctive sign of a sulfur miner. It's proof of how unjust a lack of adequate labour rights and safeguards can be. 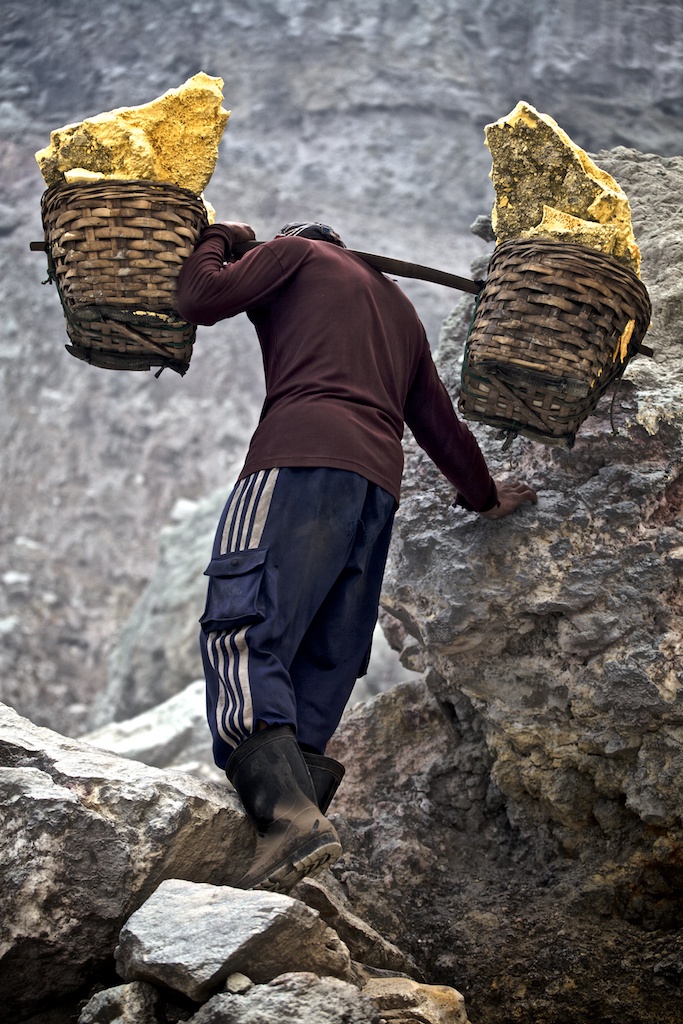 For each kilogram of hardened yellow sulfur, a miner receives 900 rupiah (roughly 9 cents of a US dollar); 65kg works out to 54,900 rupiah (5.70 US dollars). At the same time, tourists pay 15,000 rupiah (1.55 US dollars) per person to journey to the top of Ijen, and 30,000 (3.11 US dollars) for each camera they bring with them. Tourists receive no ticket that proves payment; it’s an informal transaction. None of this money goes to the miners. 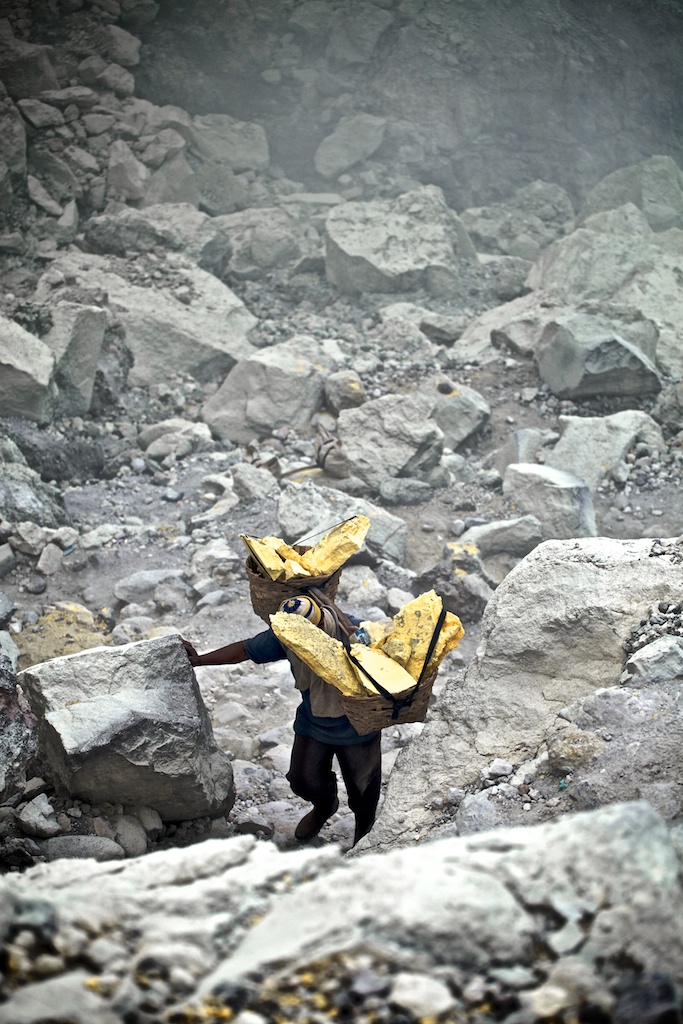 The authorities ("Police") at the Ijen trailhead lie to tourists, telling them each miner makes 600,000 rupiah (62 US dollars) a day, and that their workload and the carrying itself is not too burdensome or harmful in any way. 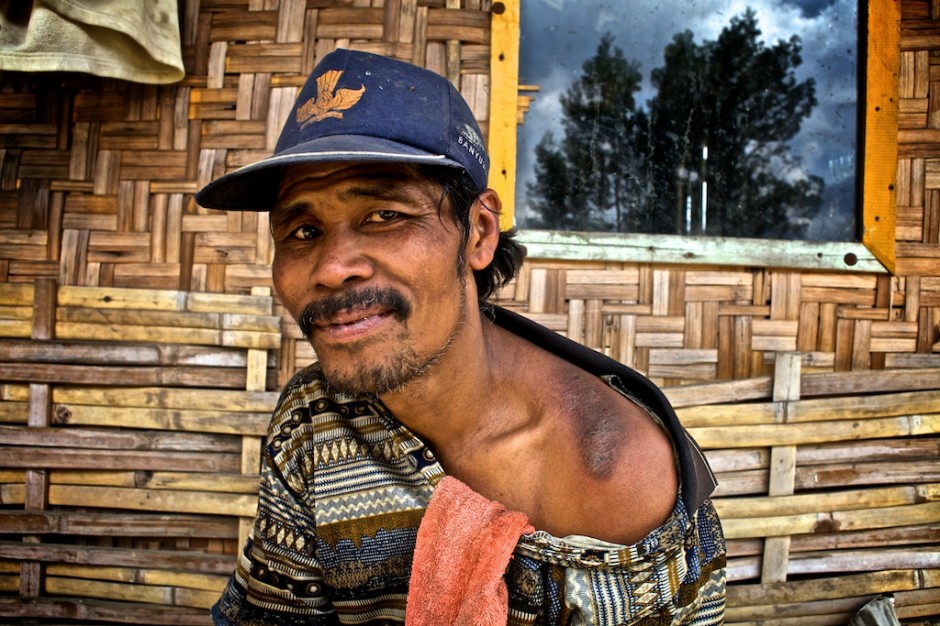 On their way down, the miners stop so tourists can take pictures of them. They ask for a small fee per picture taken. Some tourists refuse. It’s worth a try -- such an easy chance for money compared to the hard day’s work. 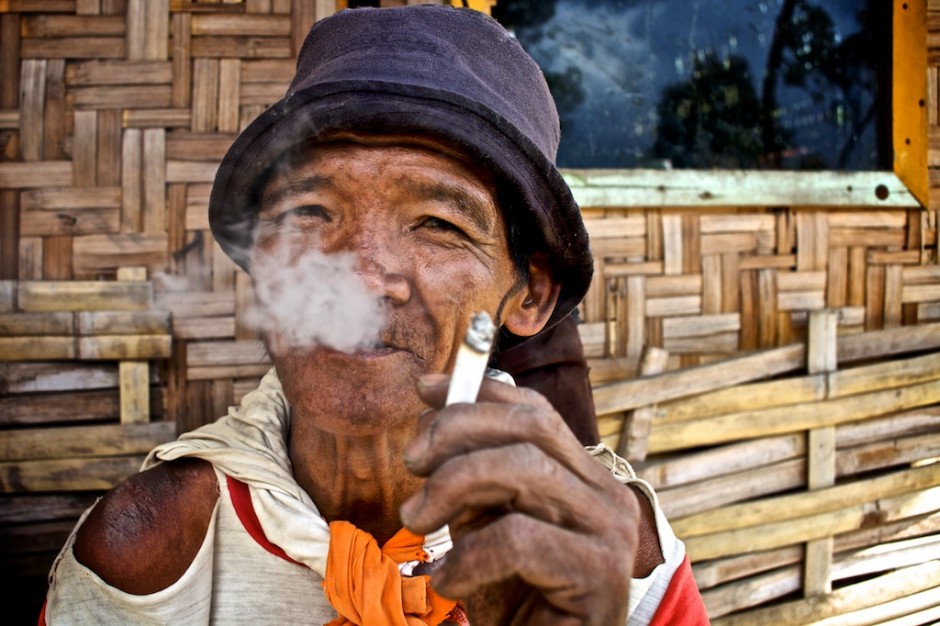 An old miner smokes a cigarette and exposes his shoulder. He complains about the pay. He is able to make just one trip a day. When he was younger, he could do it two or three times. This ongoing practice in East Java is a vicious mechanism and a sick show. It appears the same hand is behind two crimes: labour exploitation without safe regulations, and the extortion of a fee from tourists to access a natural area where a lucrative and illegal mining operation proceeds unchecked.

10 Things To Do in Surabaya, Indonesia

A Day in the Life of an Expat in Surabaya, Indonesia