I don’t even remember how I found Project: AK-47 in the first place, but I do remember it kept popping up – on my Twitter feed, then in a random Google search, then I saw a post about its newest campaign, Wear Their Reality. Wear Their Reality is a campaign in which you can buy a set of dog tags that represents the tags of one of the 100,000 child soldiers in Southeast Asia (where most of their work is focused).

There are child soldiers all over the world, but Project: AK-47 is the only known group working in the rescue, rehabilitation, and reintegration of child soldiers in Asia and Latin America. The group has been working with children at risk in Southeast Asia since 1994, officially launching their child soldier demobilization strategy in 1998, and launching projects in Mexico and in the Philippines in 2009.

To date, they have 474 orphans and children at risk in their care, with more than 200 of these children being former child soldiers that they have rescued.

As both an educator and human rights supporter, I really wanted to learn more about this organization, and was able to connect with Analee Ward, Project: AK-47 Advocate Alliance Coordinator.

Abbie: How and why did Project: AK-47 start in the first place?

Analee: The founder was a full-time missionary in Thailand for nearly 15 years. When he found out there were children being conscripted into armies in Burma (Myanmar), he couldn’t sleep until he did something about it. He and the indigenous staff he had formed developed relationship with the local militias and offered education and community projects as an incentive to release the children.

We launched Project: AK-47 in the U.S. in 2008 not only to raise awareness, but to engage people in the fight as well.

Abbie: Why is the issue of child soldiers such a big one – how is this happening?

Analee: Many children become soldiers when they are orphaned, abandoned or forcibly conscripted into the army or a militia. Child soldiers tend to be physically small, agile and fast, as well as less visible than adults. They are easily influenced and less likely to challenge the goals of their superiors.

These children rarely demand a soldier’s wage and have significantly less need for food (and cannot speak up for themselves when they do need more food). When deployed against a civilized army that follows international laws against the use of child soldiers, they might cause an emotional and ethical dilemma for these soldiers, so rebel groups often use child soldiers as human shields and suicide bombers.

Due to a poor understanding of the effects of war and death, child soldiers tend to be naively courageous, even in situations which adult soldiers would consider hopeless. They easily fall victim to manipulation and brainwashing, as they haven’t yet developed their own personal moral codes or beliefs regarding wrong or right.

But perhaps the most horrific reason why children are used is because they are often considered to be expendable, and thus are considered more suitable for dangerous tasks like mine clearing, spying and death sentence missions. 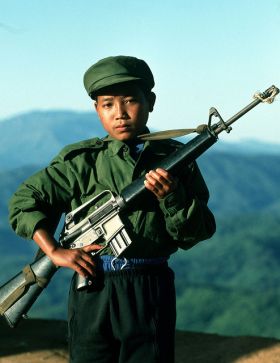 Abbie: How do you get these children released? Where do they go?

Analee: We use education as a negotiation tool. We tell the military leaders that if you give us the children, we will educate them and take care of them until they are adults, then reintegrate them into their communities as contributing members of society. In most cases, the officers see the need for educated leaders among their people and voluntarily release the children.

The children then stay in safe houses that are outside of the immediate conflict area, but still within their communities. Our national staff is local, so the children grow up and learn in their own languages and culture.

Abbie: What do you hope to achieve with Wear Their Reality?

Analee: These tags are replica dog tags, and each one represents a unique child soldier who is still in active duty. What happens when they are conscripted into the militias is that they lose their identities as children and become nameless, faceless statistics.

We want to get 100,000 people wearing these tags as advocates and voices for these children. The problem is that so much of the world doesn’t know that this is taking place, but when people wear these tags and someone asks them about it, it’s an opportunity to tell their stories. It makes it all the more real.

It’s a tangible reminder that this is going on, and we can help end it.

If you want to help, the biggest thing you can do is spread the word about these child soldiers, or contact an organization such as Project: AK-47. If you’d like to purchase a dog tag, visit the Project: AK-47 website.

Child trafficking is also a problem in many of these areas. The Somaly Mam Foundation works everyday to get girls out of the sex tourism business.

Tagged
Travel Myanmar Mexico Philippines Thailand
What did you think of this story?
Meh
Good
Awesome

Everything you need to know about visiting the Dominican Republic this summer
The best island in the Caribbean for every type of traveler
These destinations are opening to US tourists this summer
16 pro-tips for getting your car ready for a road trip
Can we trust negative COVID-19 tests as a green light for travel? We asked a travel doctor.

May 28, 2020 Eben Diskin
✖
travelstoke
Download the mobile app
stoked by