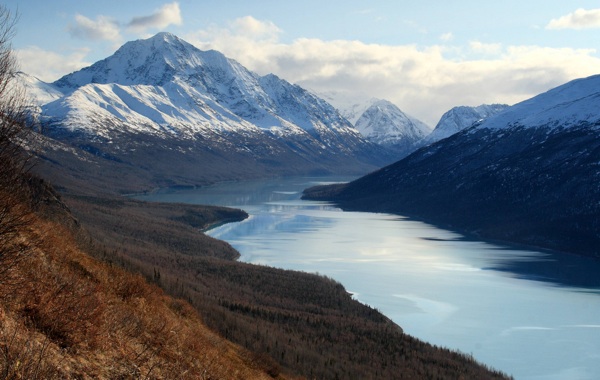 TV and digital media reporter Brian Stelter writes in today’s New York Times that the former Alaska governor has entered into an agreement with the cable channel TLC to film an eight-part documentary about Alaska.

Discovery’s Chief Operating Officer, Peter Liguori had the following to say in the company’s press release:

“Discovery Communications is so excited to help Sarah Palin tell the story of Alaska, and to have a great documentary filmmaker in Mark Burnett helping to reveal Alaska’s powerful beauty as it has never been filmed, and as told by one of the state’s proudest daughters,” said Peter Liguori, Chief Operating Officer, Discovery Communications. 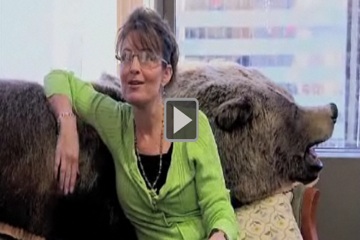 Note that just under the press release is a video clip of Palin sitting on a couch that appears to be topped by a bear rug– complete with bear head.

According to Stelter, Palin had been shopping her TV show pitch around Hollywood this month, with little initial success; all the broadcast networks turned down her proposal, presumably due to its nature-oriented theme. But TLC, under its parent company, Discovery, bought global rights to the show and is reportedly prepared to pay Palin more than $1 million per episode for her hosting skills.

There are at least a dozen jabs I could make about all this, but the real point I want to make is this: Is Sarah Palin really the best ambassador for wild Alaska?

This is the woman who has argued that climate change is not a real phenomenon, but a conspiracy theory promulgated by “so-called…experts” using “fraudulent scientific practices.” “[W]e can’t say with assurance that man’s activities cause weather changes,” Palin asserted in an op-ed piece in The Juneau Empire and The Washington Post.

She’s also the woman who has been repeatedly cited by environmental advocacy groups as having an “abysmal” record when it comes to conservation and environmental protection policies and practices. Among the evidence they draw upon:

-As governor, Palin disputed the conclusions of research conducted by the federal National Marine Fisheries Service regarding the beluga whale population. The NMFS stated that the belugas are in critical danger; Palin argued that the population was actually rebounding.

-Palin supported an initiative to shoot wolves from helicopters, as well as a policy of paying a $150 bounty–from state funds– to hunters who turned in “freshly killed” wolves.

-She sued the Interior Department to contest its decision to list the polar bear as an endangered species.

As she stepped onto the national stage, Palin often portrayed herself as a lifelong nature lover. Photos of Palin fishing, hunting, and riding an ATV were commonplace, and there’s nothing wrong with any of that (well, except maybe the ATV-riding).

But being a fisher and hunter does not an environmentalist make, and Palin’s hardly a champion of the natural world.

So why has TLC gone where the broadcast networks didn’t even want to tread? Is Sarah Palin really the best ambassador to show off Alaska’s wilderness?

What did you think of this article?
Meh
Good
Awesome
Bookmark
Posted In
Culture
Destinations
Alaska, United States

35 habits that are hard to shake when you leave Alaska

8 signs you were raised by an Alaskan mom

How to humiliate yourself in Alaska

10 things the rest of the US can learn from Alaska

How to confuse an Alaskan

How to properly do summer in Alaska

7 memories you have growing up in Alaska

Husky saves deaf hiker, and dozens of others, on Alaskan trail