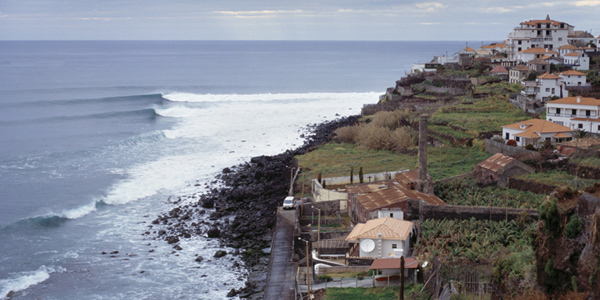 Madeira, Portugal. World class surf break, before construction of a seawall. Photos courtesy of Will Henry

Save the Waves Coalition is dedicated to preserving and protecting surfing locations around the planet and to educate the public about their value.

At any given spot along the coast, various factors–wind direction, swell, tide level, and underwater features–all determine how a wave will break.

But out of the almost infinite number of waves around the world, rarely do these factors combine in such a way as to produce a wave of true quality for surfing. And as with every other ecosystem, these factors exist in an easily-corrupted balance. 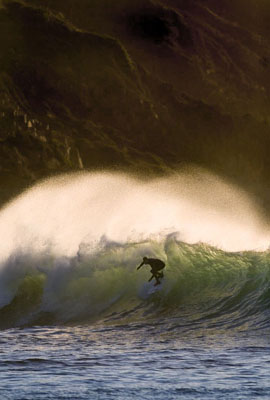 Photo by Will Henry.

In 2001, the existence of a beautiful wave, Jardim do Mar, a classic right point in Madeira, Portugal was threatened by a proposed government project to construct a marina.

American surfer Will Henry and friends knew that if if the marina were built, this special wave would be lost forever. In the process of organizing a fight against the project, they formed the Save the Waves Coalition .

Through a combination of alliances with local surfers, organizations, and politicians, their fight was successful. The new marina was moved to a different location.

However, out of the prolonged media campaign and protesting that ensued, the resulting “victory” would be something Henry later called bittersweet.

“One of our first big mistakes was taking a very American approach,” he says. “Making so much noise embarrassed some of the politicians, and any future hope of negotiating with the government was destroyed.”

After moving the marina, the government still came back later and hastily constructed a seawall [see photo below, left], severely limiting the days and conditions when the wave is ridable, and making it extremely dangerous to surf.

Since this first campaign, the coalition has learned “to avoid words like success and victory,” and to remember that a wave–even once saved–may always be threatened again. 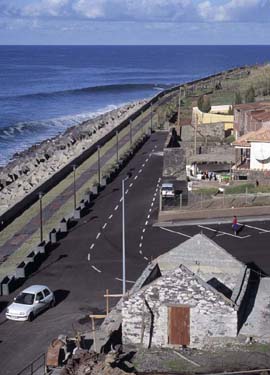 The coalition documented the story of Jardim do Mar in their film Lost Jewel of the Atlantic. A few Madeira locals tried to prevent the film from being shown, threatening lawsuits and even bodily harm. It was eventually shown however, drawing sold-out crowds in the first two weekends.

Over the years, Save the Waves has learned to adapt. They now operate around the world, protecting waves on the coasts of almost every continent. Among their key missions are creating local “surfonomics”reports demonstrating the inherent economic value of an undisturbed surf spot for its local economy.

For example, four years ago in Lima, Peru, a developer wanted to build a marina to enhance the land value near a large housing development. This marina would have destroyed a classic wave called La Herradura.

Instead of protesting in person, Save the Waves wrote letters to the executives of the company, contending that a world-class wave may be more financially beneficial than a marina, citing how exceptional surf spots cause local real estate value to increase dramatically in the US.

The CEO eventually promised that the wave would never be harmed, however, as is usually the case, the wave is being threatened again.

Save the Waves faces many challenges. One of the most sensitive is dealing with corrupt foreign governments. The projects which threaten waves are oftentimes born out of illegal back-room deals.

This makes the coalition’s challenge doubly difficult. For obvious reasons, politicians involved in the deals do not want to cooperate, nor do private companies wish to implicated.

Secondly, although the internet optimized communication, Save the Waves staff is spread thin. Projects are started only when local people and surfers who know about the organization reach out for help.

Finally, funding has been the coalition’s single biggest challenge. Regarding the minimal support they’ve received from most large surf companies, Henry’s frustration is evident: “Here we are, protecting the future of their market, and we’re barely surviving. We could be doing so much more.” 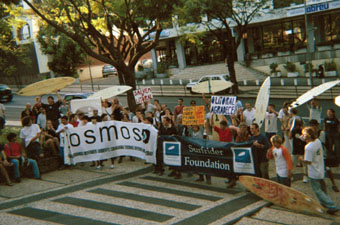 Photo by Will Henry.

The main reason for limited support is that most large surf apparel and accessories companies are publicly traded. Shareholders are the top priority and want to see their stock price go up, making it difficult for CEOs to donate money to non-profit organizations.

Even so, Henry is quick to thank the companies Save the Waves has received support from: Patagonia, Clif Bar, Newman’s Own, The Surfer’s Path, Quiksilver, Billabong, and Volcom.

Save the Waves is currently producing their third film, All Points South, a documentary about pulp mill pollution in Chile. The film demonstrates how consumption of products here in the US can causes environmental degradation in distant lands.

‘All Points South’ Trailer – a new documentary by Save the Waves Coalition from Philip Kao on Vimeo.

Along with battling the polluters themselves, it is important for Save the Waves to educate and influence the consumer market. All Points South features some of the world’s best surfers, and will be released summer 2009.

The people of Save the Waves are world citizens, committed to making a difference by protecting the environment and preserving waves (and healthy marine ecosystems) not just for surfers, but everyone.

Visit www.SaveTheWaves.org for more information and to see how you can help.

What did you think of this article?
Meh
Good
Awesome
Bookmark
Posted In
Activism Volunteer Environment Sustainability