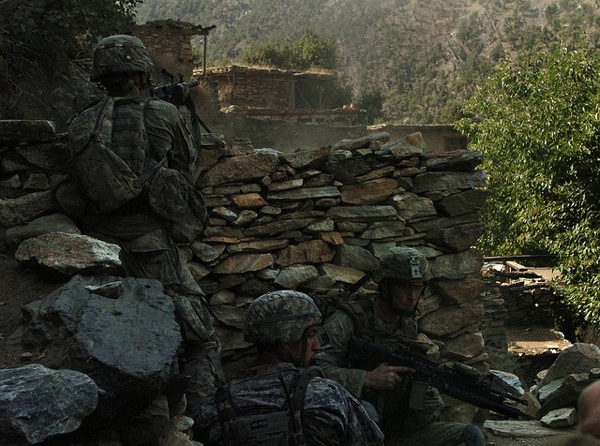 Soldiers in the Korengal Valley, regarded as the most dangerous place in the world, and site of filming for the documentary. Photo: The US Army

If the name Sebastian Junger sounds familiar, it probably is.

Junger’s the journalist who wrote the wildly popular book The Perfect Storm. To the writer’s own surprise, the hardcover spent a year on The New York Times bestseller list; the paperback stayed at the top of the same list for more than two years. A Hollywood movie with A-listers George Clooney and Mark Wahlberg was made.

We’ll forgive him for the fact that the term has now become an entrenched phrase in American English, especially in light of his new project, the just-released documentary, “Restrepo.”

Restrepo is the name of an American combat medic, Pfc. Juan Restrepo, who was killed in action, and the subsequent military outpost his unit built in his name.

Junger and his co-director, Tim Hetherington, spent a year embedded with the 173d Airborne Brigade’s Battle Company, Second Platoon. Free from talking-head commentary, the documentary is completely framed from the perspective of the soldiers, a narrative strategy that contributed to the film’s win at this year’s Sundance Film Festival.

Have you seen “Restrepo”? If so, we’d love to hear your opinions in the comments section.

What did you think of this article?
Meh
Good
Awesome
Bookmark
Posted In
Culture
Destinations
Afghanistan

The surf report from Kandahar