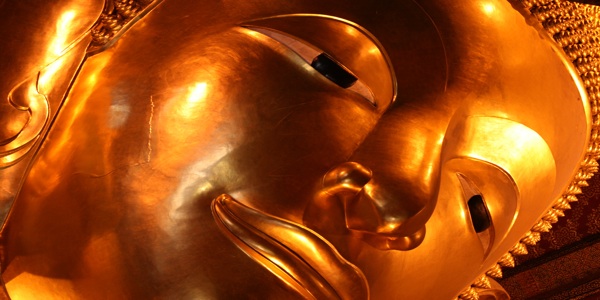 “Russell Simmons has a lot of Buddhas.”

That’s one thought I have as I realize my cup of coffee has tipped over onto the gorgeous Persian rug covering the floor of his ample living room… the rug the moderator has expressly asked us *not* to rest our coffee cups upon.

That’s the third thought, and the last one I have before I hear John Forte (who, I will later learn, is a rapper and former producer of The Fugees), addressing another member of the group, asking her to “thank your father for granting me a pardon.”

Forte, you see, was just released from prison in January, after President Bush commuted his 14 year federal sentence (of which he served seven years) for a drug-related conviction.

That means he is addressing President George W. Bush’s daughter.

I stop trying to sop up my coffee as Forte picks up the guitar to play his song, “Breaking of a Man”:

*
It’s a rainy Saturday in September and I’m one of about 40 people under 40 years old sitting in the living room of hip hop mogul and philanthropist Russell Simmons, gathered here–directly across from the World Trade Center site–to “create an honest and open assessment of our generation and develop action items that will grow [among group members] and ultimately unite the generation in a more meaningful way.”

The people seated in the circle represent some of the most important thinkers and doers of my generation. Some of them are people whose work I’ve been interested in for a long time, like Jay Parkinson, founder of Hello Health, and Jehane Noujaim, documentary filmmaker and director of “Control Room” and “Pangea Day.”

There are also people I haven’t heard of before, but over the course of the weekend, I learn their stories. Dan Choi, the Army National Guard Arabic linguist and Iraq War veteran who was discharged for acknowledging he was gay. Robert Reffkin, a Wall Street analyst who’s running a marathon in every US state to raise money for underprivileged kids. Debbie Berebichez, aka “The Science Babe,” who takes her PhD in physics to break down the scientific mysteries of daily life (the physics of high heels?) in an accessible way (she’s particularly passionate about getting young girls interested in science).

I don’t know about you, but the big lessons I have to learn in life are the ones that are the toughest to “get.”

There are women and men; blacks, whites, Asians, Latinos, and biracial folks; Muslims, Christians, Jews, and agnostics; Republicans, Democrats, and Libertarians; people from really wealthy families and those of us from middle or lower class backgrounds; people who are familiar with the polished wood tables of the nations’ most influential board rooms and those of us with more experience in street activism.

I look around and notice all the difference.

*
I find myself in a break-out group with Barbara Bush, daughter of the former president. I’ve made no effort to restrain myself from offering my assessment of her father openly here on Matador, compiling a round-up of his less articulate moments and praising the Iraqi “shoe throw” journalist (and just wishing he had better aim) and I sit in our circle with a concealed dubiousness about what she brings to the table other than her name.

One of the Buddhas is poised in a corner of the room, a benign presence on this overcast afternoon, the day after the 8th anniversary of the attacks, in a penthouse within view of the WTC site. Its golden legs folded easily into a triangle, its forehead relaxed, the Buddha’s eyes look down at us without judgment.

I’ve judged Barbara before she has a chance to share her ideas, projecting her father’s ideology and his shortcomings onto her unfairly. It’s only when she speaks up about health care and the potential uses of technology that I realize we actually have a great deal in common. She’s articulate, thoughtful, a good listener. The hour allotted for our conversation ends quickly. I’m surprised that I want to know more about her work, to hear more of what she has to say.

*
I don’t know about you, but the big lessons I have to learn in life are the ones that are the toughest to “get.” Being patient? Recognizing that sometimes getting my way or being right will do more harm than good (even if I am right)? Being in the moment? Being non-judgmental? The opportunities to finally get these–and get them right–come up over and over again. I don’t know if that’s the challenge of my generation, but it’s certainly *my* challenge, and it’s what I take away from the weekend, and what I realize I need to work on moving forward.

What did you think of this article?
Meh
Good
Awesome
Bookmark
Posted In
Activism Narrative