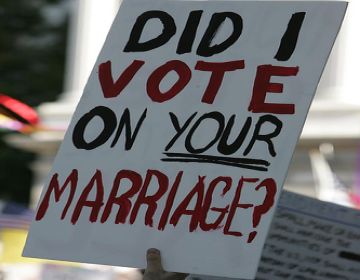 It certainly has been a tough week for the “liberal agenda” (term noted with dripping sarcasm), what with the Massachusetts let’s-sink-healthcare-completely race results.

Plus, there’s the San Francisco trial of two couples challenging California’s ban on same-sex marriage, where a proponent of Prop. 8 declared he “thinks gays are more likely to be pedophiles and that allowing them to wed would lead to the legalization of polygamy and incest.”

But, some good news yesterday – Cindy McCain, wife of former GOP Presidential nominee and anti same-sex marriage crusader John McCain, has come out (no pun intended) against Prop. 8, which would lead one to assume she is, in fact, in favor of gay marriage.

Better yet, this video whipped up by San Francisco Chronicle’s Mark Fiore breaks down more than a few preconceived notions about “family values”:

Yeah, really, whose marriage is it anyway?