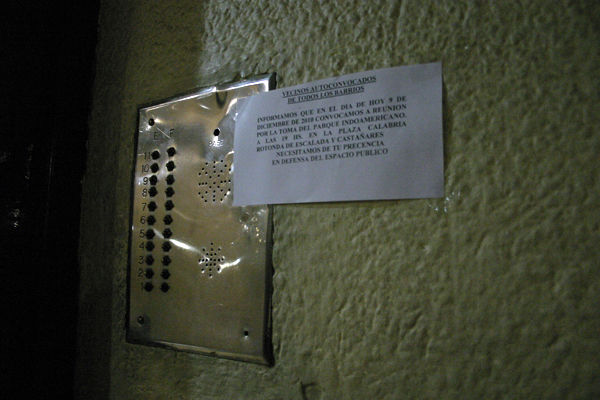 A flyer outside our building reads: Inter-neighborhood meeting: This is to inform you that today, Dec. 9, we’re calling a meeting about the taking of Parque Indoamericano. Your presence is needed in defense of the public space at Plaza Calabria at Escalada and Castañares. Photo: Kate Sedgwick

Less than 2 blocks from where we live, there is a days-long violent protest.

Displaced residents of Villa 20 who were forced from their homes took over Parque Indoamericano on Tuesday. Villa 20 is a slum built by the residents (some 21,000 of them as of 2007, according to a government document) who technically have no legal right to be there. They are basically squatters who build their own homes, and the villas are cities unto themselves, mostly full of immigrants from poorer nations like Bolivia, Paraguay and Peru.

Following an announcement by Buenos Aires’ mayor, Mauricio Macri, that residents would be required to show deeds to their property or be evicted, many residents of Villa 20 decided to occupy the park in protest.

Two were shot and killed, many say by the police who were sent to throw them out of Villa 20 Tuesday. According to Pagina/12, police say the many injured (including a baby) and the two that were killed were all shot by small caliber bullets (as if that proves anything about who the shooters were, if it is indeed the truth). A police source also says police also sustained injuries from small caliber bullets.

According to Diario Registrado, “Cristian Fernandez, neighborhood leader of the Villa 20, said it ‘was brutal and unnecessary repression because we were negotiating and were going to leave peacefully if the police showed the eviction order they said they had.'”

Neighbors are very upset. My boyfriend Seba went to a meeting at 7:00 tonight, but said there was nothing going on aside from the signing of a petition to change the judge who ordered that the protesters be given toilets, food and water. Residents of the nearby (legal) apartments are seeking to have the case transferred to another judge since the occupation of the public park, fires, and violence are seen as a threatening intrusion in a neighborhood already glutted with villas.

We heard shooting from our apartment earlier.

Right after night fell, we looked through the fence to the park and saw fires burning. Seba said he could see people still throwing rocks. Residents are protesting the protesters.

Clarín reports there are more than 250 families in the park. You can see photos of the early part of the protest and construction of the tents by following that link.

Seba’s mom just called and says neighbors from the other side of the main road (Escalada) have stopped traffic on the highway that leads to the airport. We heard the sirens and honking from here.

Later, a cacophony of horns, leftover vuvuzelas, air horns, spoons and pots and pans erupted in protest throughout the towers where we live. Listen below:

facebook playlistmyspace musicmyspace music
Tagged
News
What did you think of this story?
Meh
Good
Awesome