Tokyo’s nightlife is a heady mix of old-world Japanese imbibing experiences along with the increasing popularity of foreign party trends. There are the super clubs and underground DJ hideouts of Shibuya, the bar-filled yokocho (alleyways) and LGBTQ+ hotspots in central Shinjuku, Ginza’s plentitude of smoky cocktail bars, and a thriving citywide craft beer scene in the throes a timely resurgence.

Note: Some bars in Tokyo, especially those hiding amid the corridors of aging multistory buildings, can be difficult to find. What3words is a great location finding app that can help alleviate some of your navigation concerns. 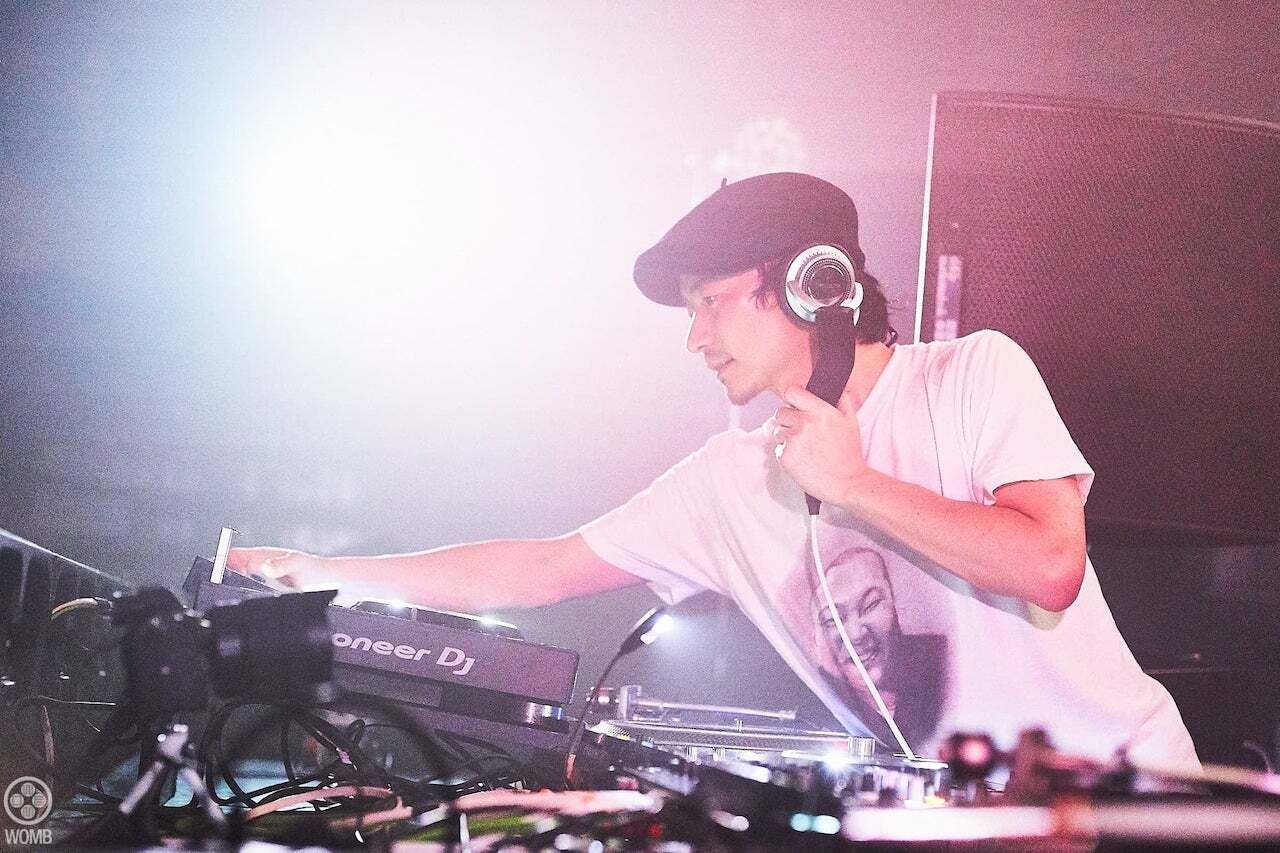 WOMB $$ — As Tokyo’s most renowned nightclub, WOMB frequently hosts big-name DJs from across the globe, and it’s a focal point of the city’s party scene. Like most of Japan’s larger nightclubs, WOMB now leans heavily toward electronic music — particularly on the main floor, which is dominated by Asia’s largest mirror ball along with high-tech sound and laser systems — yet it does achieve some dance genre variety over its three sub-floors.

Tasuichi $ — This expat enclave at the end of Shibuya’s Center-Gai shopping street is a standing-only bar, but customers are quickly appeased by the super cheap prices: $4 beers and $5 cocktails. The close-quarters environment makes it a great spot for solo travelers looking to meet a few fellow wanderers on the road.

Goodbeer Faucets $$ — Thanks to a change in the legal definition of beer and increased international brewery collaborations, the craft beer scene in Japan is undergoing a second renaissance after craft beer had fits and starts as a fad in the late 90s. Goodbeer Faucets is a celebration of this reinvention. The spacious bar has over 40 craft beers and ales on tap, alongside a menu showcasing new guest brews daily.

Dubliners $$ — One of Tokyo’s best-known Irish bar chains, serving up pints of Kilkenny ale and Guinness. The location is what sets the Shibuya branch apart however. Its shaded veranda and outdoor TV screens overlook the highstreets funneling toward the iconic Hachiko crossing. It’s particularly lively on St Patrick’s Day and during international sporting events. 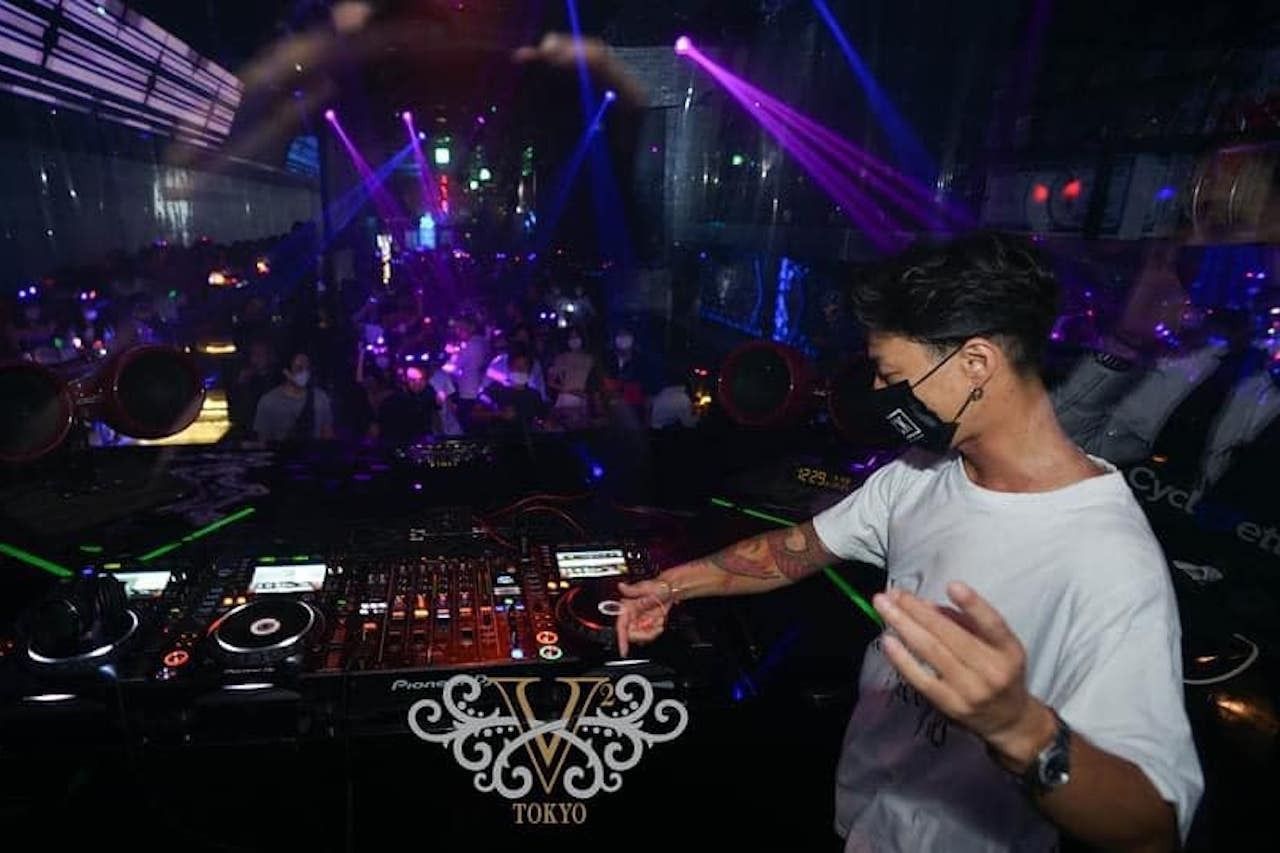 BrewDog $$ — Scottish-based craft brewery BrewDog has spread its tendrils far and wide, including within Japan. The Roppongi branch has a stripped-back interior, brickwork counter, and an old movie theatre-style menu above the bar highlighting a hefty selection of infused crafts and ales. The alternating beers on tap pair nicely with BrewDog’s burger bar food menu. 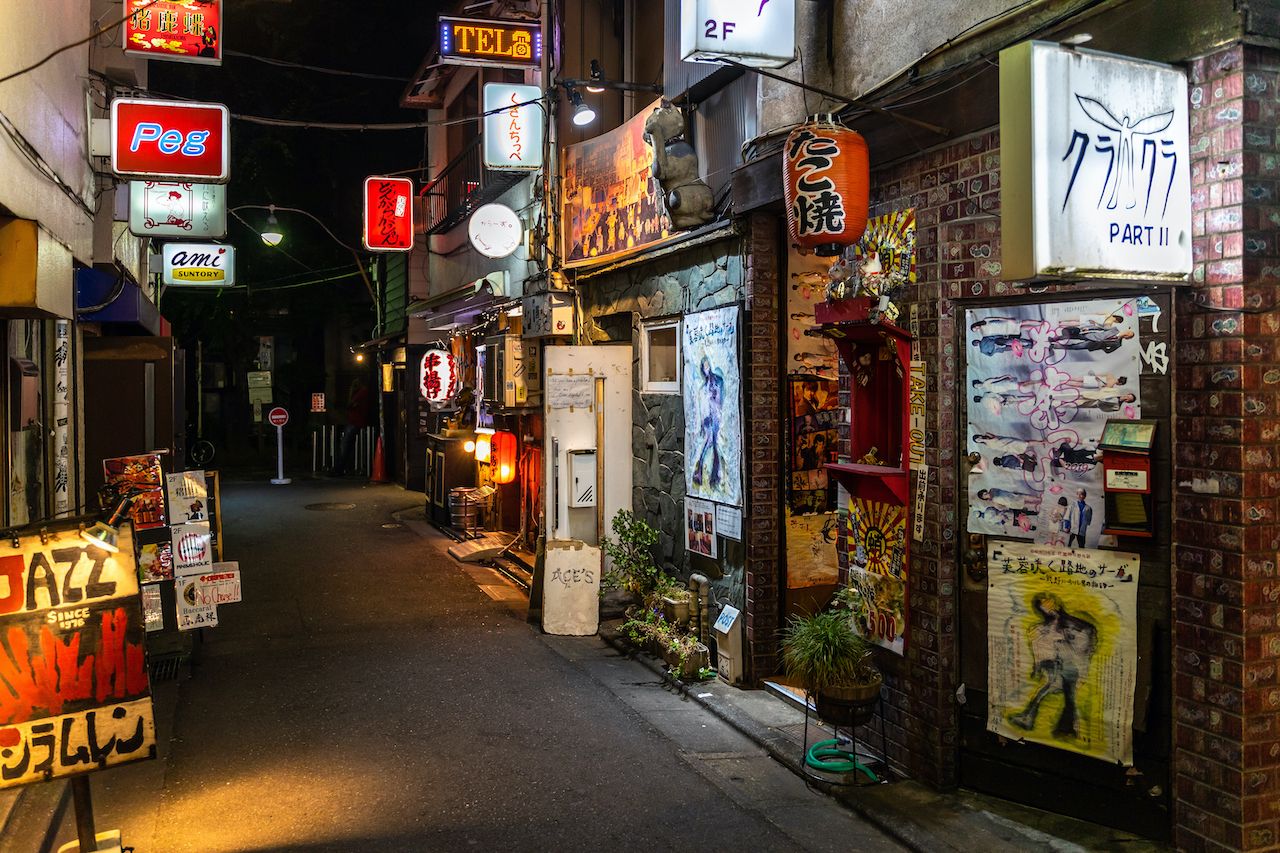 Golden Gai $-$$$ — When thirsty travelers walk the streets of Tokyo by night, Golden Gai is often their first port of call. Set against the highrise backdrop of Kabukicho, it’s a living relic from Japan’s Showa Period (1926-1989), with 250 bars lining a series of labyrinthine alleyways. Many bars can fit no more than four or five customers at a time, and don’t expect all of them to be accomodating to foreigners — if there’s English out front, it’s a good indicator you’ll be welcomed inside.

The options are just as varied as they are plentiful. Deathmatch In Hell might not be the most alluring of names for some, but the bar’s kitschy heavy metal setting and its affable owner, Go, make it a worthwhile jump out of your comfort zone. For fans of 80s and 90s vinyl LPs, hit up Bar Plastic Model. And if you can’t resist a bit of karaoke, Champion will have you on the mic in no time. But honestly, the best part of Golden Gai is stumbling upon your own little secrets.

Omoide Yokocho $-$$$ — Omoide Yokocho, lovingly referred to by its post-war nickname “Piss Alley,” is a truncated version of its Golden Gai counterpart just across the tracks. Lit by paper lanterns, draped in floral decorations, and with noren curtains hanging over the wood-latticed fronts of bars and restaurants, entering Omoide Yokocho is like stepping into the pages of a Yasunori Kawabata novel. Yakitori (chicken skewers) and Japanese draft beers are the rave here. Note that many of Omoide Yokocho’s establishments have begun to feel a little touristy over the last few years.

New York Bar $$$$ — On the 52nd floor of the Park Hyatt in Shinjuku, the New York Bar is surrounded on all fronts by glass walls with far-reaching views of Tokyo’s endless skyline. A live jazz band and creative in-house cocktail list add to the high-class atmosphere. And if you think it looks familiar, it’s the same location where Bob Harris (played by Bill Murray) was frequently spotted downing tumblers of Suntory whisky in Sofia Coppolla’s Oscar-winning film, Lost in Translation.

Ni-Chome $-$$$ — Shinjuku 2-Chome, or Ni-Chome, is one of Tokyo’s liveliest LGBTQ+ neighborhoods and has a wide range of clubs. Dragon Men is one of the most popular gay clubs in the area — a raucous atmosphere of disco balls, neon lights, and muscular dancers that last long into the night is guaranteed. Arty Farty is slightly more intimate, but no less tame. It plays mostly western pop music and has comparatively lower drinks prices (which makes it a big hit in a city as expensive as Tokyo). 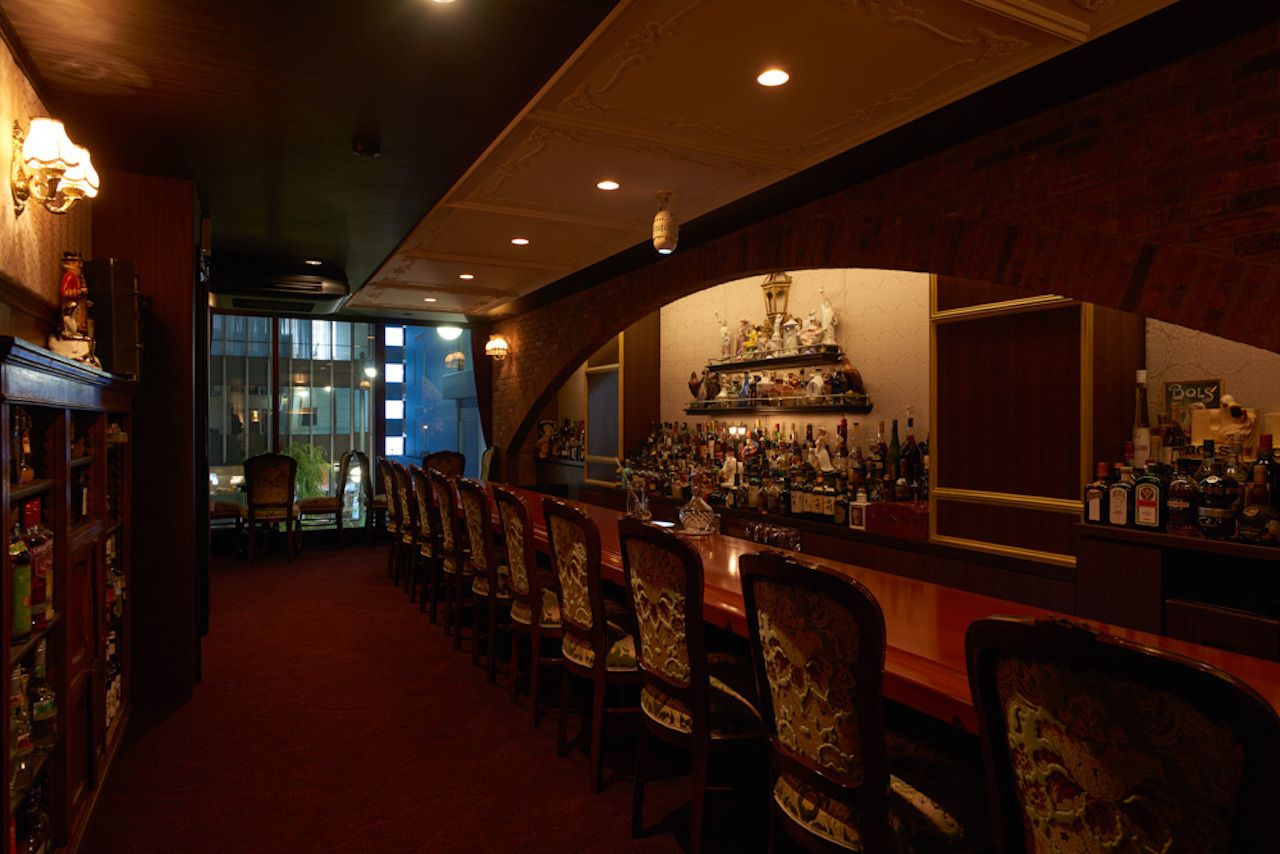 Gaslight Eve — Aesthetically, Gaslight Eve is more evocative of the antique, gaslit interiors of Tokyo’s traditional cocktail bars. Somewhat conversely, it’s also a pioneer for women’s equality in Japan’s male-dominated cocktail artisan industry, led by the Ginza branch mixologist, Naomi Takahashi. Among her many accolades, Takahshi bagged the award for best aperitif at the 2013 IBA World Cocktail Championships for her Wisteria cocktail — which is absolutely sublime.

Bar Orchard $$$ — A stand out cocktail lounge in a neighborhood that has hundreds of them. Run by husband and wife mixologists, Sumire and Takao, Bar Orchard is all about potent libations flavored with seasonal produce. The fruit-bowl menu sits atop the bar. To order, pick a taste, pick a strength, and let the creators create. Drinks are served in outlandish receptacles, but true to Bar Orchard’s lofty reputation, they’re seldom just gimmicks.

Bar Sherlock $$ — Inspired by Sir Arthur Conan Doyle’s titular detective, Bar Sherlock is a smoky little cocktail lounge hiding behind a large teak door on the fifth floor of a nondescript building. The stairwell may have seen better days, but step inside and you’re greeted by scenes of Victorian England. As with many cocktail bars in Tokyo, menus are seen as taboo in Bar Sherlock. Just tell the tuxedo-clad bar staff what kind of liquor you favor and let them do the rest. 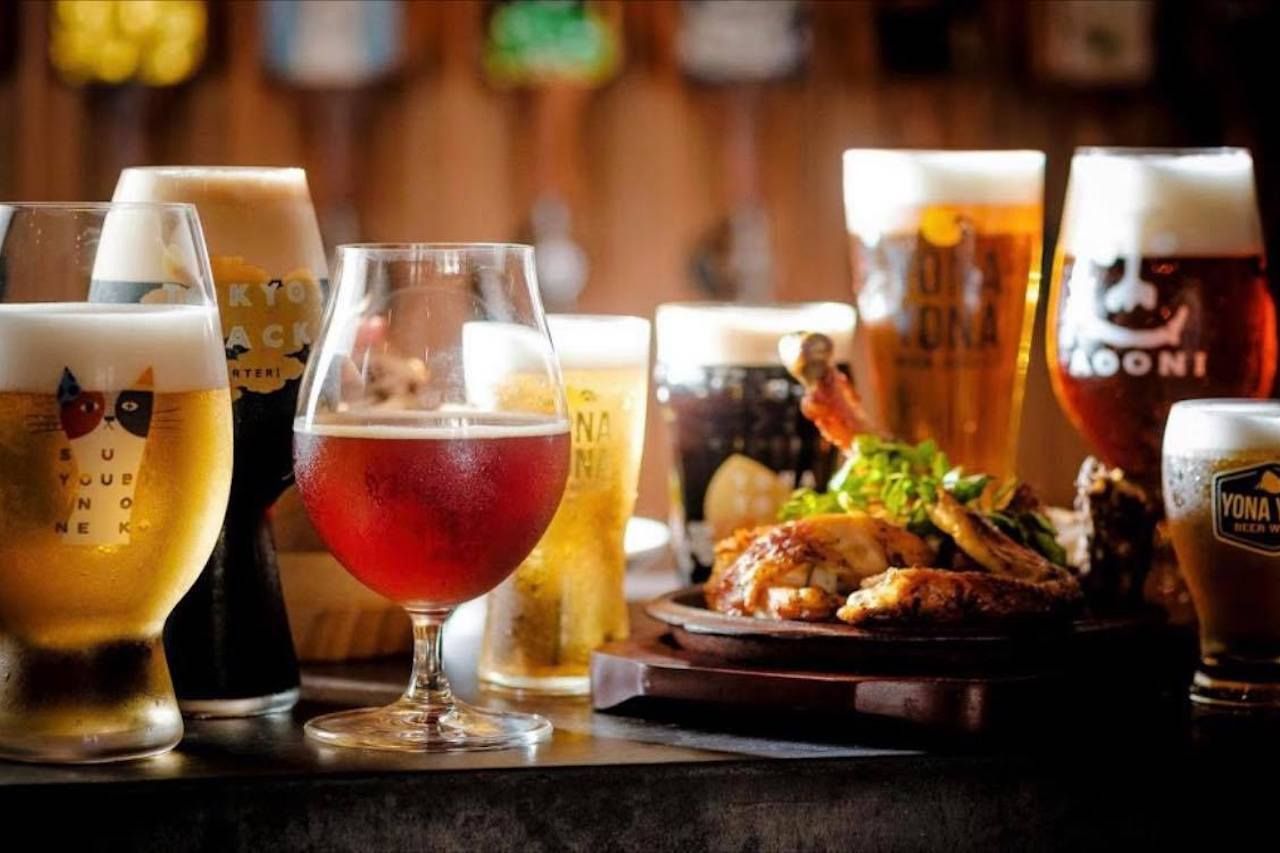 Yona Yona Beer Works $$ — As one of Japan’s chief ale crafters, Yoho Brewery stormed to popularity with its Yona Yona American Pale Ale. The Ebisu taproom is a showcase of their latest and greatest creations, including the Indo no Aooni (IPA), Suiyobi no Neko (Belgian White), and Tokyo Black (Robust Porter).

Industrial Lounge 205 $$$ — At one stop from Shibuya by train, Ebisu is an upmarket district home to a large portion of Tokyo’s expat community and a diverse collection of late-night bars. Industrial Lounge 205 is an eccentric cocktail spot, hiding at the end of a lonely corridor that gives no indication as to what’s behind the door. Prepare to be surprised, as a range of high-end and obscure spirits populate the shelves of the giant u-shaped bar, while strange accoutrements like mounted stags heads and a polar bear statue decorate the large, windowless space.

Bar Tram, Trench, and Triad — Here, you’ll find a focus on herbal ingredients and refined spirits. At BarTram, creating drinks with absinthe is viewed as the height of alcoholic artistry. The results are as tasty and imaginative as they are likely to send you involuntarily tumbling home. Also worth a visit are Bar Trench and Bar Triad, which are cocktail bars owned by the same group and located in Ebisu.

Spirits + CocktailsYou’re drinking sake wrong. Here’s how they do it in Japan.
✖
travelstoke
Download the mobile app
stoked by