After your first and second days in Tokyo, head beyond the prefectural limits toward the inimitable icon of Japan: Mount Fuji. The stratocone volcano is the highest geological structure in the country, rising more than 12,000 feet above sea level.

For visiting Fuji, you have two primary options: hiking or viewing. During the summer, accessible hiking trails that vein the mountain open up in July and August. Alternatively, you can view the mountain from afar; Lake Kawaguchi is your best bet.

Option one: Fuji on foot 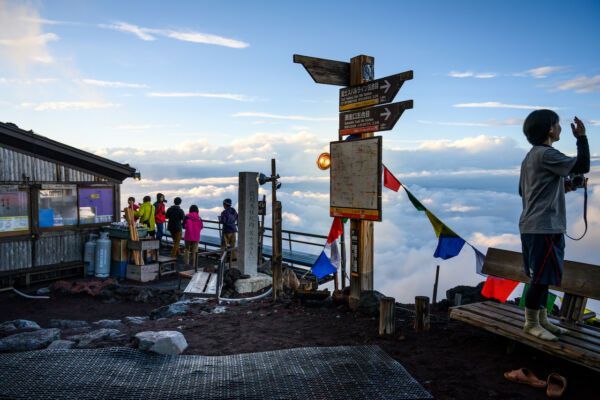 From the fifth station on Mount Fuji (where buses ferry prospective hikers), the walk to the top is approximately six to 10 hours depending on your average speed. In harsher conditions, like typhoons, the time frame can be extended. As such, it’s best to get up and tackle the mountain passes as early as possible (unless you’d rather attempt the famed overnight climb). Buses run throughout the day from Shinjuku Station and take between two and 2.5 hours.

Fuji is incredibly well provisioned along its trails, with rest stations that provide room and board, as well as shops selling walking sticks and hiking equipment. The east-facing Yoshida trail is the most popular, having been used for over 500 years. Though the Japanese summer is hot, heightened elevation and unpredictable weather lead to pretty frigid conditions near the summit, so it’s best to bring a backpack with warm clothes and waterproof gear.

From Fuji’s zenith above a blanket of clouds, you can watch both the sunset and sunrise, depending on when you opt to climb. When the skies clear, you’ll get unimpeded views of the surrounding Yamanashi and Shizuoka prefectures rolling into the distance. Few views in Japan are quite as inspiring.

Many of the 300,000 trekkers who annually reach the highest peak in Japan also visit the post office at the top to send good tidings home. It’s a nice addition during a time when Instagram feeds are flooded by thousands of near-identical #MountFuji selfies from the summit.

You can book a room in a mountain hut near the summit if you want to wake up early to catch the sunrise before your descent. If time is of the essence, however, you can hike back down after nightfall when the trails are guided by lanterns. 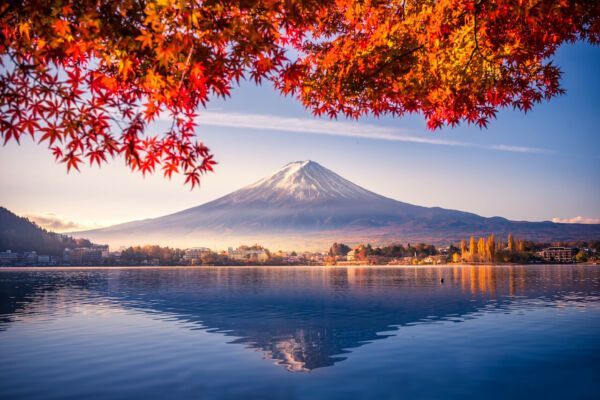 Hiking season is short and sweet, with trails closing around the start of September. As such, you may have to view Fuji from afar. Winter and late autumn tend to usher in the clearest skies in this part of Japan — and thus the most auspicious viewing conditions. However, as long as the land isn’t shrouded in heavy clouds or low-lying mists, you should get great shots of Japan’s most revered volcano towering high above the surrounding alluvial plains.

Lake Kawaguchi in Yamanashi Prefecture is the most popular viewing spot, with direct buses from Shinjuku and Shibuya. The postcard-worthy views of the snowy peak reflected on a large lake change seasonally, with Fuji framed by cherry blossoms in spring and fiery maples and golden ginkgo in autumn.

Visiting Lake Kawaguchi will likely leave you with some time on your hands on your return to Tokyo. If you have some gas left in the tank, consider checking out Koreatown in Shin-Okubo for some bibimbap or dak galbi (Korean stir fries) and soju (a distilled spirit). Outside of South Korea, Tokyo has some of the best Korean food in Asia.

Or head to Omoide Yokocho or Ebisu Yokocho in Shinjuku and Ebisu, respectively. These alleyways are lined with hole-in-the-wall soul food shops that sell flame-grilled meat and vegetable skewers to go with Japanese draft beers and nihonshu (rice wine). Restaurant hopping in either is highly recommended.