Matt Goulding, the author of Rice, Noodle, Fish: Deep Travels Through Japan’s Food Culture, once called Tokyo the “greatest feast on Earth.” New York, Paris, and Bangkok, in Goulding’s view, can’t compare. “All of these cities offer sprawling, beautiful food cultures worthy of a lifetime of exploration, but none can compare with the depth and breadth of deliciousness proffered by Tokyo’s culinary legions.”

Tokyo has three times as many restaurants as Paris and the most Michelin-starred restaurants in the world; such lofty praise as Goulding’s comes with the territory. But with the sheer magnitude of food sizzling, frying, roasting, stewing, and marinating in the city’s 150,000-plus kitchens, how can you craft your own culinary roadmap? Attempting to gobble your way through every slice of Tokyo’s dining scene is an impossible task. Instead of taking a completist approach, it’s best to narrow it down by neighborhood, food genre, and price tag.

Note: Many in Tokyo, including those mentioned, have multiple branches. A quick search on their respective websites will indicate where they do business in case the branches below don’t quite align with your itinerary. For bookings, Pocket Concierge is recommended.

Sushi Zanmai $$$ — Sushi Zanmai is a respectable and affordable sushi chain with a number of branches in Tokyo, including one in Ginza. There are course options based on seasonal catch, as well as a la carte nigiri (raw fish on a bed of rice) options. The price varies depending on what you order: salmon and tamagoyaki (grilled egg) will dent your wallet considerably less than prized otoro (fatty tuna) and uni (sea urchin) sets.

Harutaka $$$$ — Ginza is the sushi capital of the world, and this two-Michelin-star restaurant embodies the cuisine’s refined essence: A lone counter dominates the traditional minimalist interior while chefs slice through fleshy chunks of raw seasonal fish with precision. English-speaking staff and an openness to accommodating tourists set Harutaka apart from some of the other Michelin-recognized sushi spots in Ginza, eroding the archaic tradition of “no foreigners allowed.” Book well in advance and be ready to burn a hole in your pocket — the omakase (chef’s choice) costs around $400 per person.

Kyubey $ — Founded in 1935 and now an acclaimed sushi empire, Kyubey’s main Ginza restaurant has a convivial and jaunty atmosphere that’s more evocative of Western dining environments. The sushi is excellent, with lunch ranging from $60 to $300. Walk-ins are allowed, which is a bit of a rarity in Tokyo’s high-end sushi world. 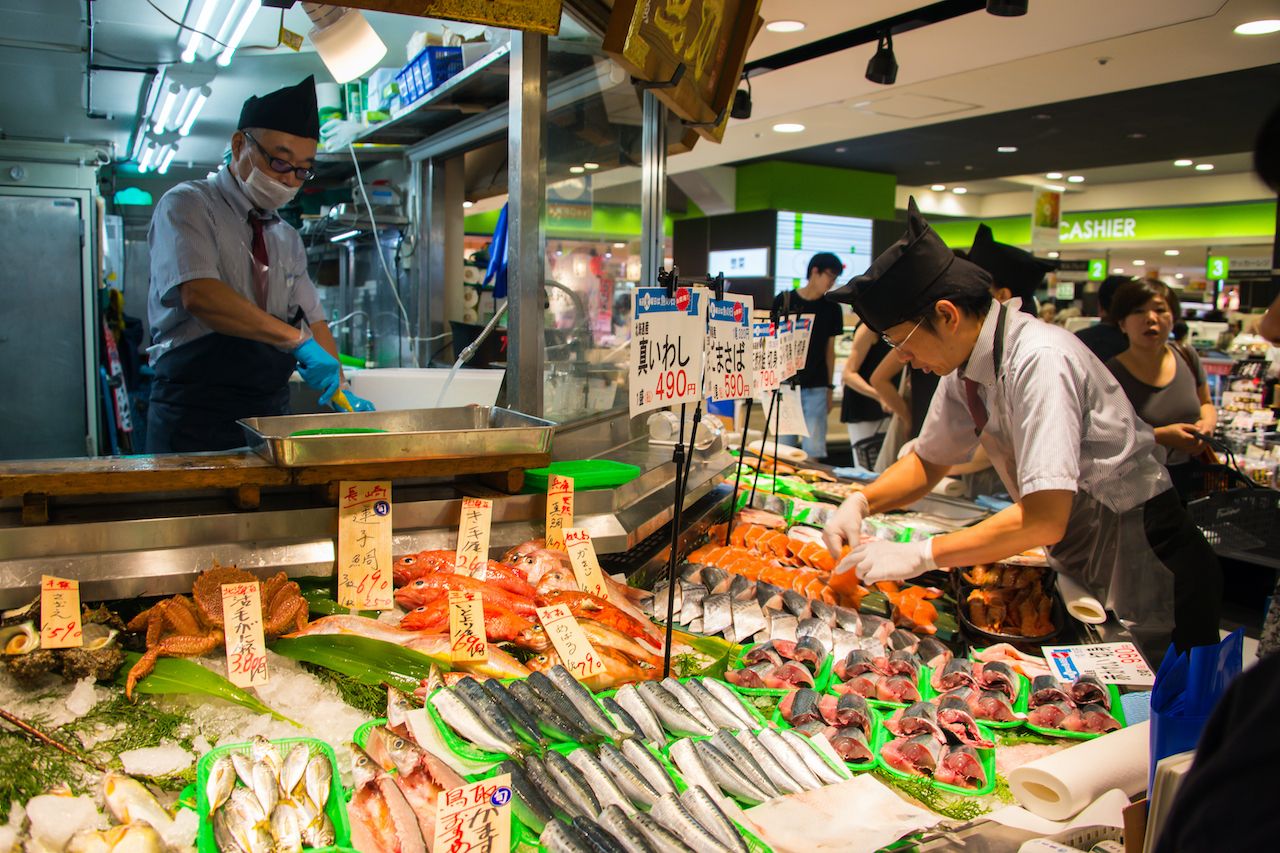 Tsukiji Market $-$$$ — Once home to the world’s largest wholesale fish market (before it relocated to Toyosu in 2018), Tsukiji sits next to Ginza in Chuo Ward. The aging shopfronts of Tsukiji’s outer market capture the spirit of Japan’s early Shōwa period (1926-1989) while shellfish hawkers, fishmongers, and street food stalls peddle an ocean’s worth of ready-to-eat seafood along the narrow streets.

Ukai-tei $$$ — Ginza is also a hub for teppanyaki restaurants, which is a Japanese open-kitchen cooking style. Set menu courses start from around $100 at lunch, and $190 at dinner, and meals revolve around fresh seasonal produce and seafood before a main course of wagyu beef. Multiple branches and offshoots exist around the metropolitan area. 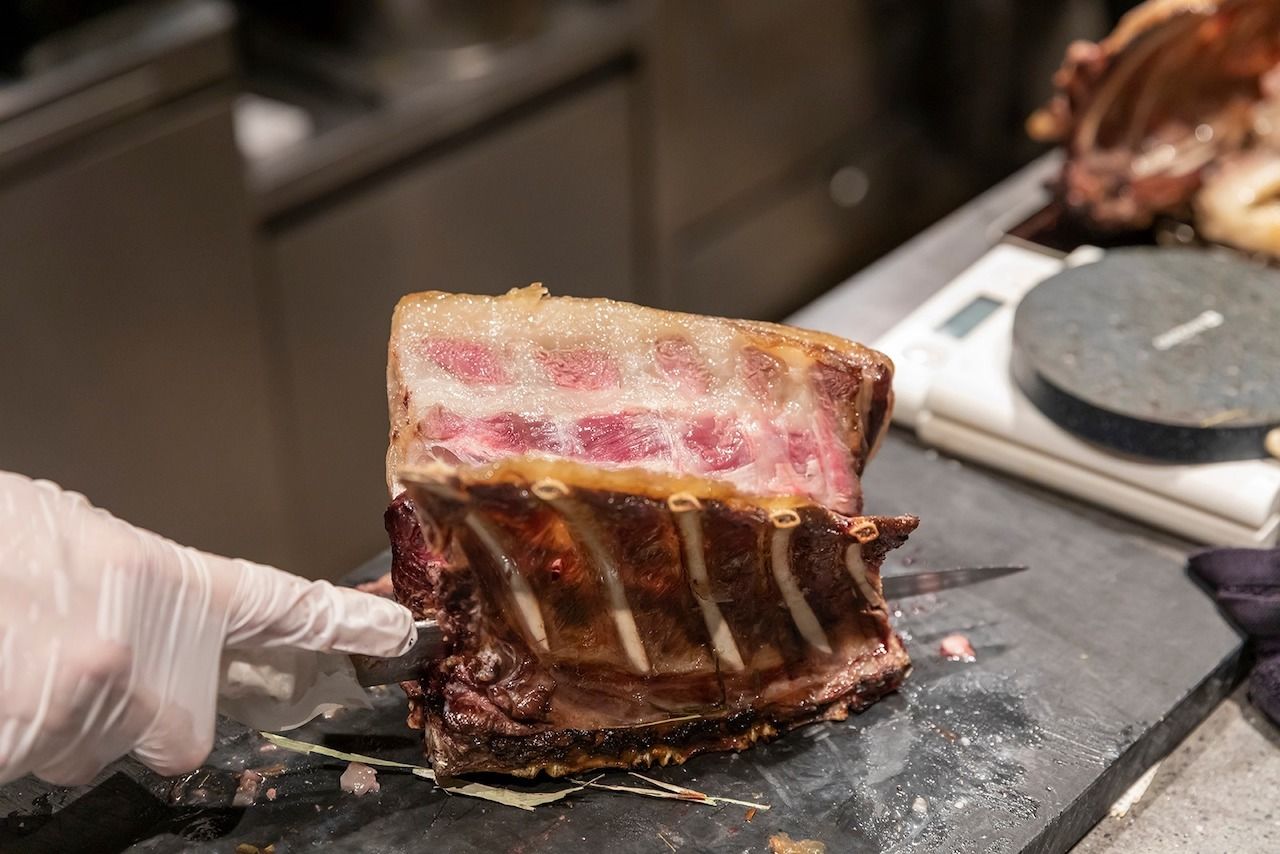 Florilege $$$ — The two-Michelin-star Florilege in Aoyama (Shibuya Ward) is modern fine-dining as theater: a multi-course, Japanese kaiseki-French fusion served on hand-crafted crockery around an open kitchen. Sustainability is a key concept at Florilege, highlighted by its signature marbled beef carpaccio, which is attained from breeding cows whose reproductive years are behind them. Lunch starts from $75, dinner from $150.

En $$ — Izakaya (gastro pubs) are a cheap and cheerful dining option in Japan. En in Shibuya (and other locations) is a slightly upscale version of this tried-and-tested formula. Like most izakaya, En doesn’t pigeonhole itself with one type of cuisine. Sashimi sets, garlic beef salads, yakitori (grilled chicken skewers), and tofu dishes all populate the menu, as do regional sake tasting boards. The Shibuya branch, with its traditional wood-finished décor and manicured garden, is the best of the En locations in downtown Tokyo.

Ebisu Yokocho $$ — Ebisu Yokocho isn’t a restaurant, per se, but rather a collection of hole-in-the-wall food joints and specialized bars crammed into a steamy and chaotic corridor in Ebisu, one stop from Shibuya by train. The mash-up of cheap finger food, Japanese barbecue, and draft beer make it a common haunt for salarymen on the hunt for a post-work tipple. 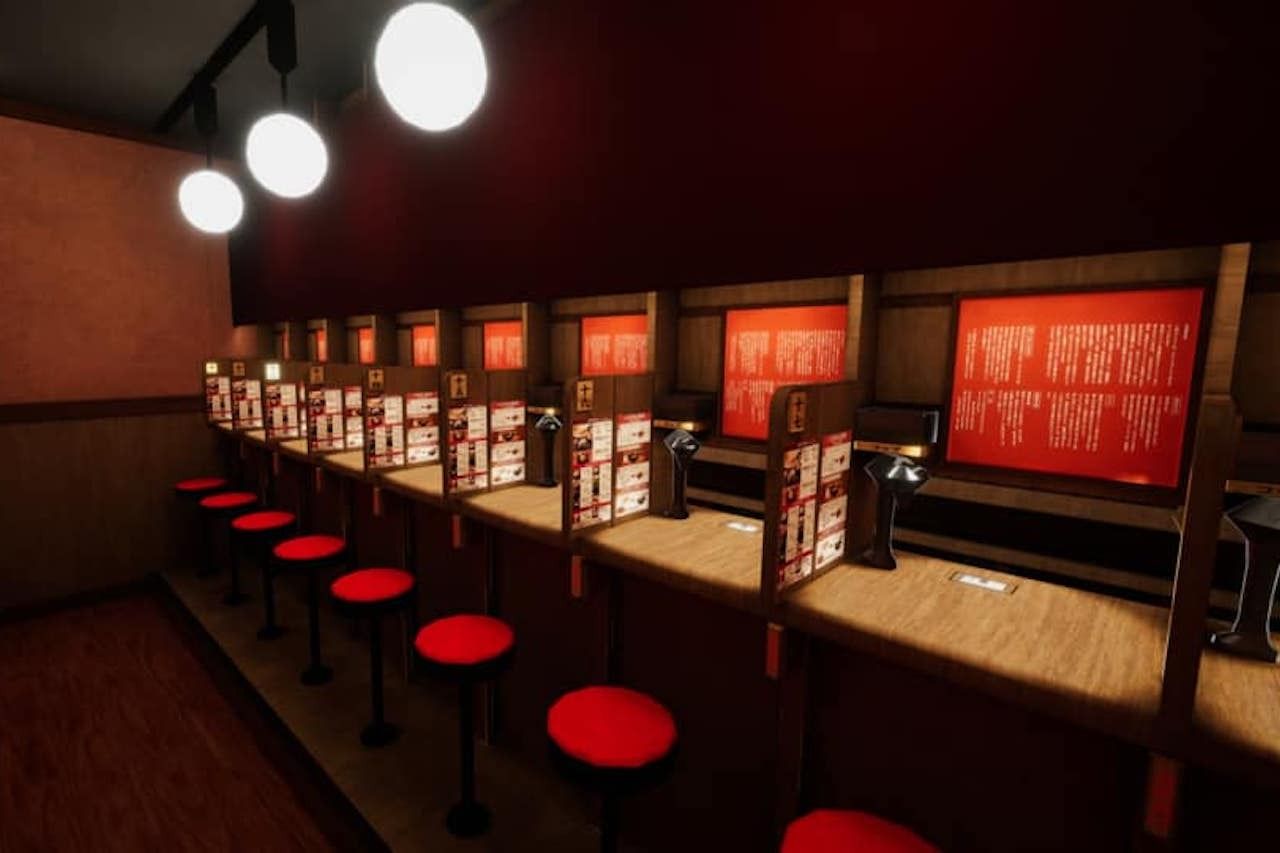 Ichiran $$ – Ichiran, one of the nation’s largest ramen chains hailing from Kyushu in the south, is a good introduction to Japanese tonkotsu (pork bone) ramen. The method of service is something many Westerners likely haven’t seen: You order from a vending machine, sit in a single-person booth, and have your umami-pumped bowl of soupy noodles passed to you under a divider by a pair of seemingly floating hands. The Shinjuku main branch is next to the station’s East Exit, but Ichiran can be found all over Tokyo.

Hanbey $ — For a trip through the annals of Japanese food history, visit Shinjuku’s Hanbey (multiple Tokyo locations). The scratchy gramophone music, wartime art, and old-school sweets seller by the entrance set the scene. The food is traditional izakaya-style sharing bites that are incredibly cost-efficient. There are also menu items emblematic of Japan’s past when food shortages were commonplace, such as grilled pig’s uterus and salted fish guts.

Koreatown in Shin-Okubo $-$$$ — A thriving area of Korean restaurants and grocery stores next to Shinjuku exists, in part, to service many of Japan’s 300,000-plus-person Korean population living in the capital. For proper chimaek (chicken and beer), bibimbap rice bowls, and Korean barbeque or “Seoul” food, Koreatown is the spot to be. Punguma is particularly popular with Korean students, offering alternating daily specials at affordable prices.

Where: Centered around the Shin-Ōkubo Station at 1 Chome Hyakunincho, Shinjuku City, Tokyo 169-0073, Japan 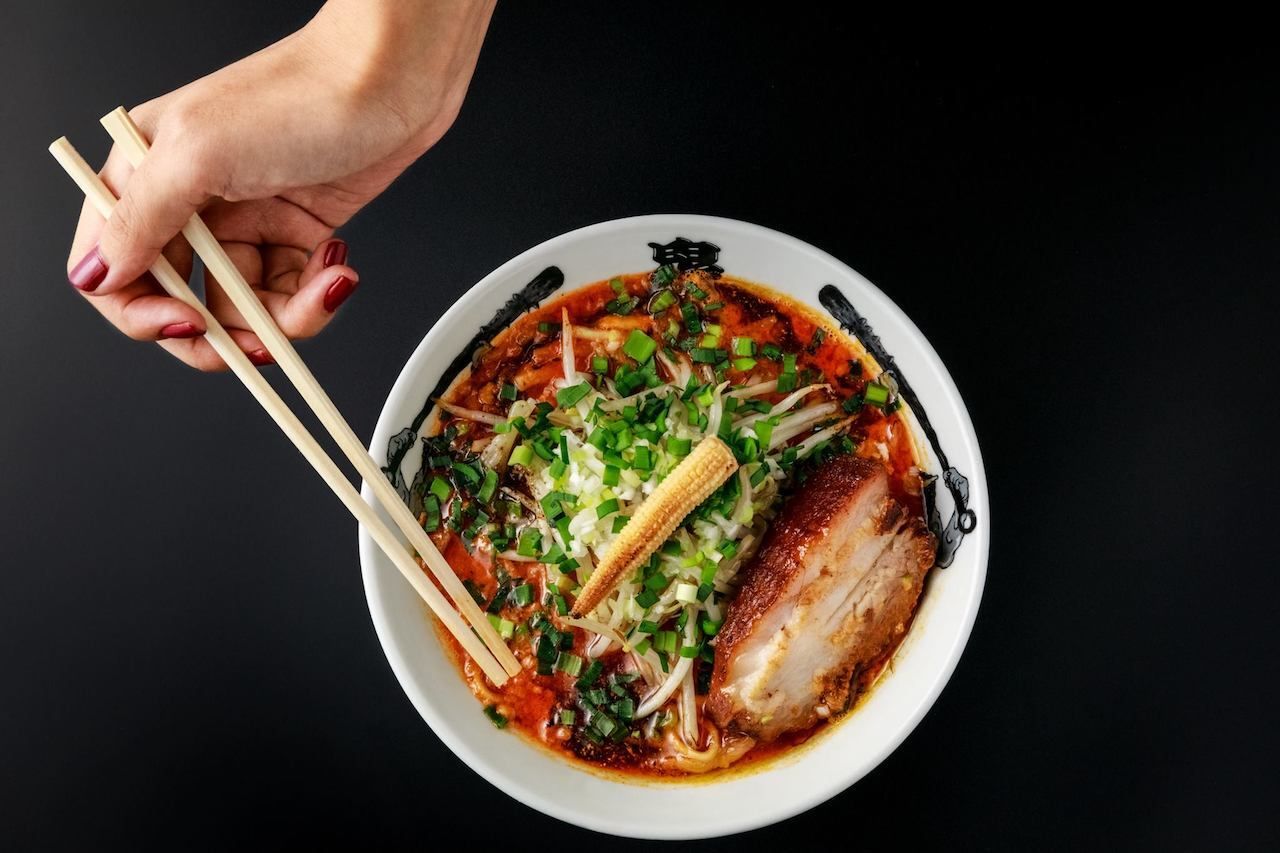 Kikanbo $$ — Chili lovers will indulge in Kikanbo’s spicy miso ramen topped with pork belly. Japanese “spicy” is comparatively milder than in many other Asian countries, but you can ratchet up the heat level by choosing a higher concentration of Sichuan pepper and chili oil. Kikanbo’s interior stands out. It’s like a Japanese Day of the Dead festival with demonic masks on the walls, accompanied by thrumming drum beats and fragrant spices in the air.

Torioh Keisuke $$ — Akihabara may be known for its reverence of pop culture, but the district also has an eclectic assortment of ramen shops tucked into its side streets. At Torioh Keisuke, the Chicken King Ramen with thigh meat on the bone and tea-smoked eggs is hard to beat.

Hakata Furyu $ — Tonkotsu ramen was born in the old city of Hakata, and it’s one of Japan’s most beloved styles of broth. At Hakata Furyu, the signature thick, white pork bone soup topped with chashu has queues lining up outside the door come lunch hour. 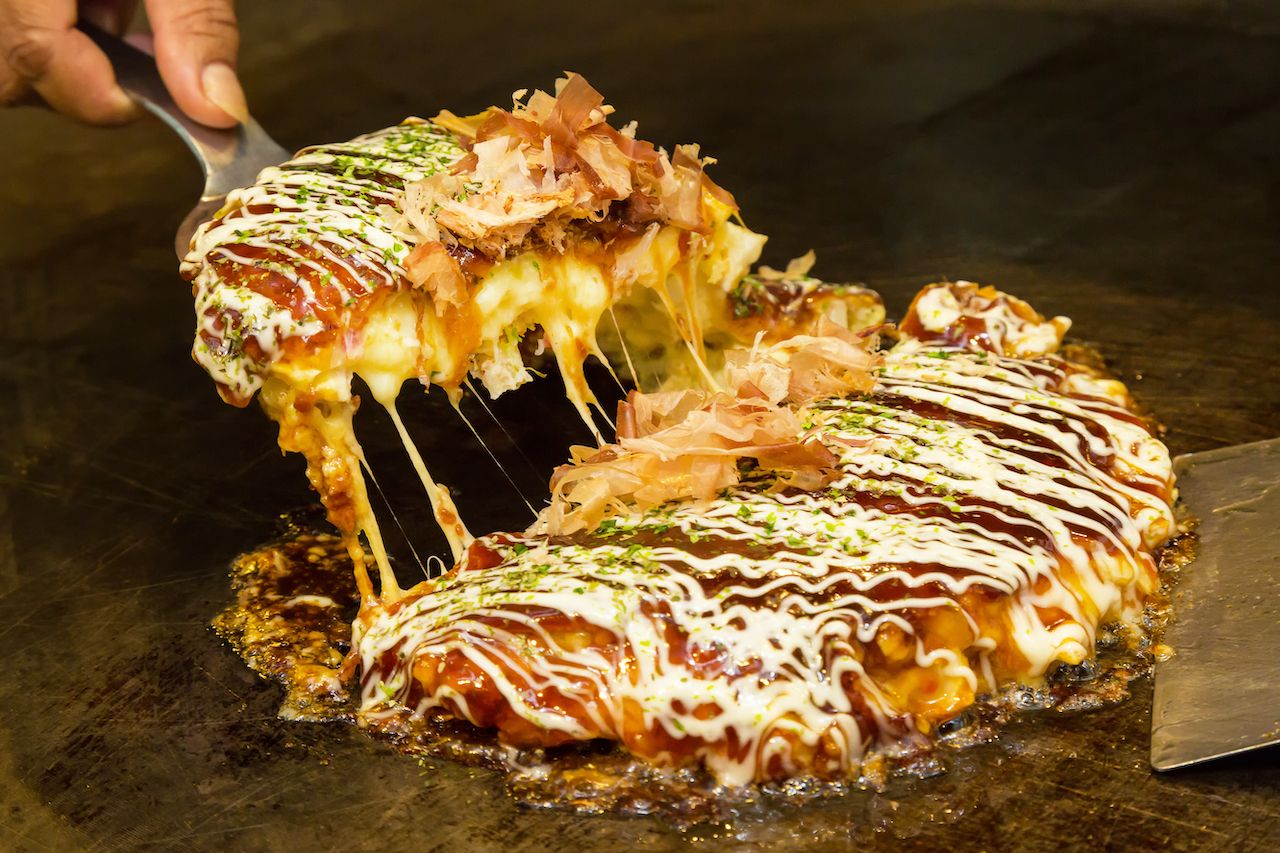 Asakichi $ — Okonomiyaki (which is sometimes referred to as an “Osaka pancake”) is the order of choice in this restaurant that’s just a short stroll from Senso-ji Temple. Okonomiyaki is a floury, eggy batter filled with ingredients of your choice, which you fry on hot plates at your table before dousing in sweet tare sauce, mayonnaise, and katsuobushi (smoked bonito flakes). It will deliver a swift haymaker to any hangovers you may be carrying. Asakichi also serves monjayaki, a less viscous style of okonomiyaki popularized in Tokyo. The restaurant has been perfecting its cheese and tomato special “monja” recipe for over 40 years.

Yaichi $ — Don’t be fooled into thinking Kobe is where all the beef is at. If you’re in Tokyo and partial to a juicy rump, you absolutely must eat yakiniku. Literally meaning grilled meat, yakiniku chain restaurants exist all over the city. Yaichi, however, has more of a stripped back “nominication” vibe — a linguistic fusion of the Japanese word “nomu” (to drink) and “communication” — with mouth-watering slabs of marbled beef thrown into the mix. You will cook at your own table, but minimal proficiency is required.

Lastly, a quick note on chain restaurants to try: For gyudon (beef bowls), Matsuya and Yoshinoya are the frontrunners; you’re never too far from at least one of them. For yakitori, Torikizoku grills tasty cuts of chicken in all its myriad forms. For Japanese izakaya food, Doma Doma has tabehoudai and nomihoudai (all-you-can-eat and -drink) options. And if you’re longing for a burger, Mos Burger is a serviceable chain shop, lying somewhere between a fast food restaurant and a classic burger bar.