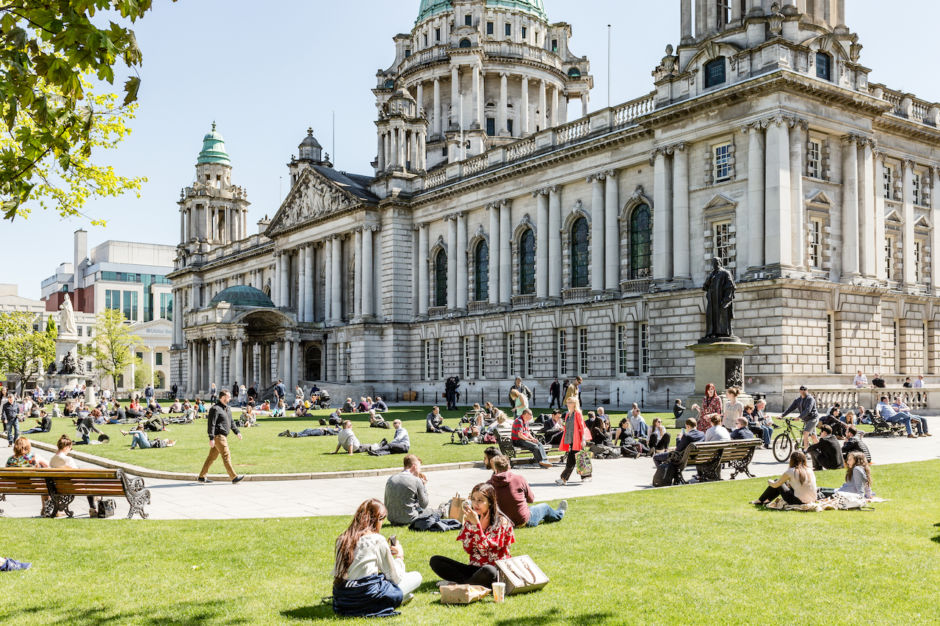 Belfast has four official “quarters,” each of which has its own distinct character, both architecturally and in terms of atmosphere. There are also many smaller districts and locales, whose boundaries have become a little blurry with the city’s development. Whether you’re looking for high-end dining or cozy traditional pubs, the following neighborhoods are a handy outline for Belfast’s varied offerings. 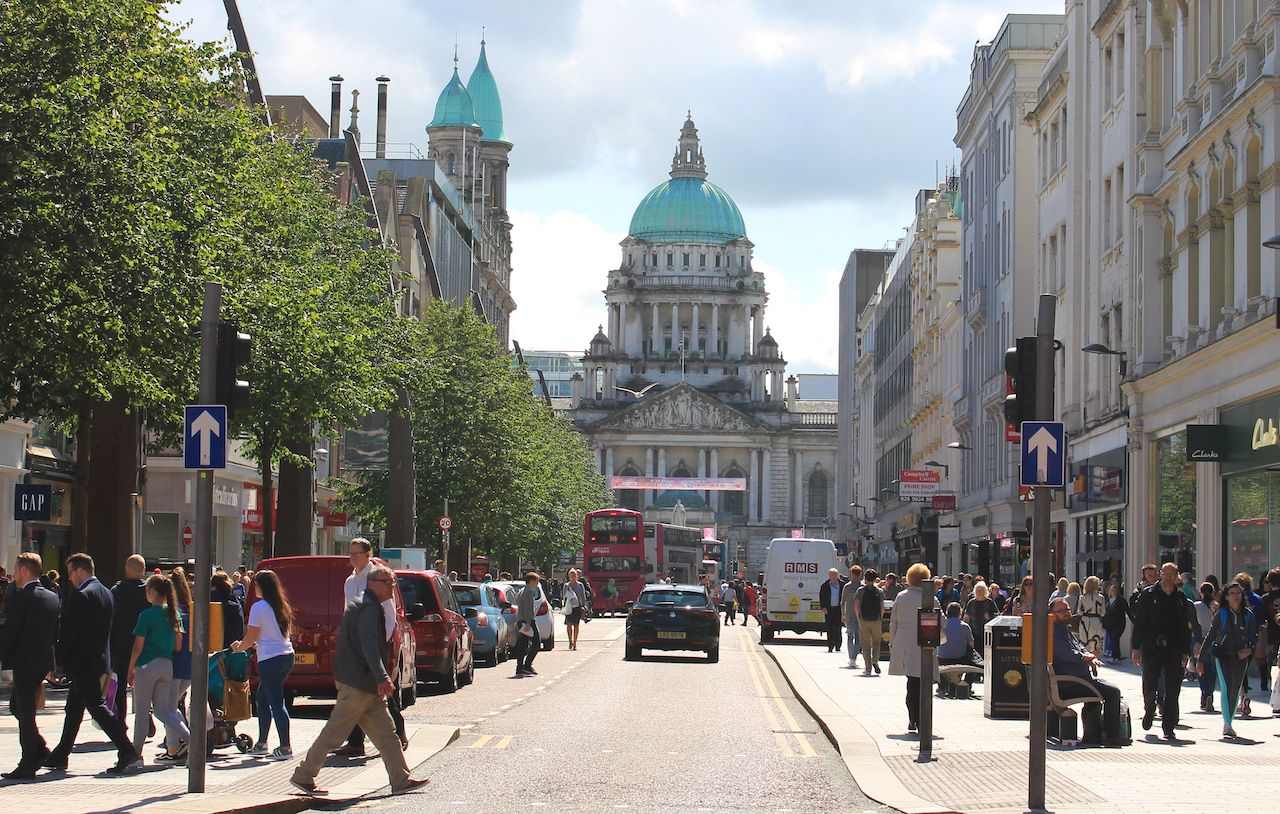 City center — Of course, Belfast’s city center is worthy of a mention in its own right. The first thing that visitors will notice is the wide range of architectural styles. The City Hall was built in the 19th century in a neo-Baroque style, with stone pillars and a vast surrounding lawn. In contrast, Art Deco and Georgian shopfronts can be found the whole length of Donegal Place and Royal Avenue. Unsurprisingly, the city center is also the hub of Belfast’s commercial activity and its main shopping district. The centerpiece of the city’s regeneration project is the Victoria Square complex, an open-air hunting-ground for those who like designer brands and chic boutiques. Come rain or shine, the pedestrian streets of the city center are lined with performers and buskers of all kinds.

Ballyhackamore — Ballyhackamore, or simply Ballyhack as it is affectionately known, was recently voted the best place to live in Northern Ireland by The Sunday Times. A short eastward bus journey will take you to this affluent, if unassuming, suburb. While many upmarket salons and boutiques can be found in Ballyhackamore, its reputation as Belfast’s culinary district is probably its proudest accolade. In not much more than a square mile, you’ll find everything from white tablecloths to traditional fish and chip shops. Visitors who’d like something a little bit sweeter will find independent coffee shops and ice cream parlors. 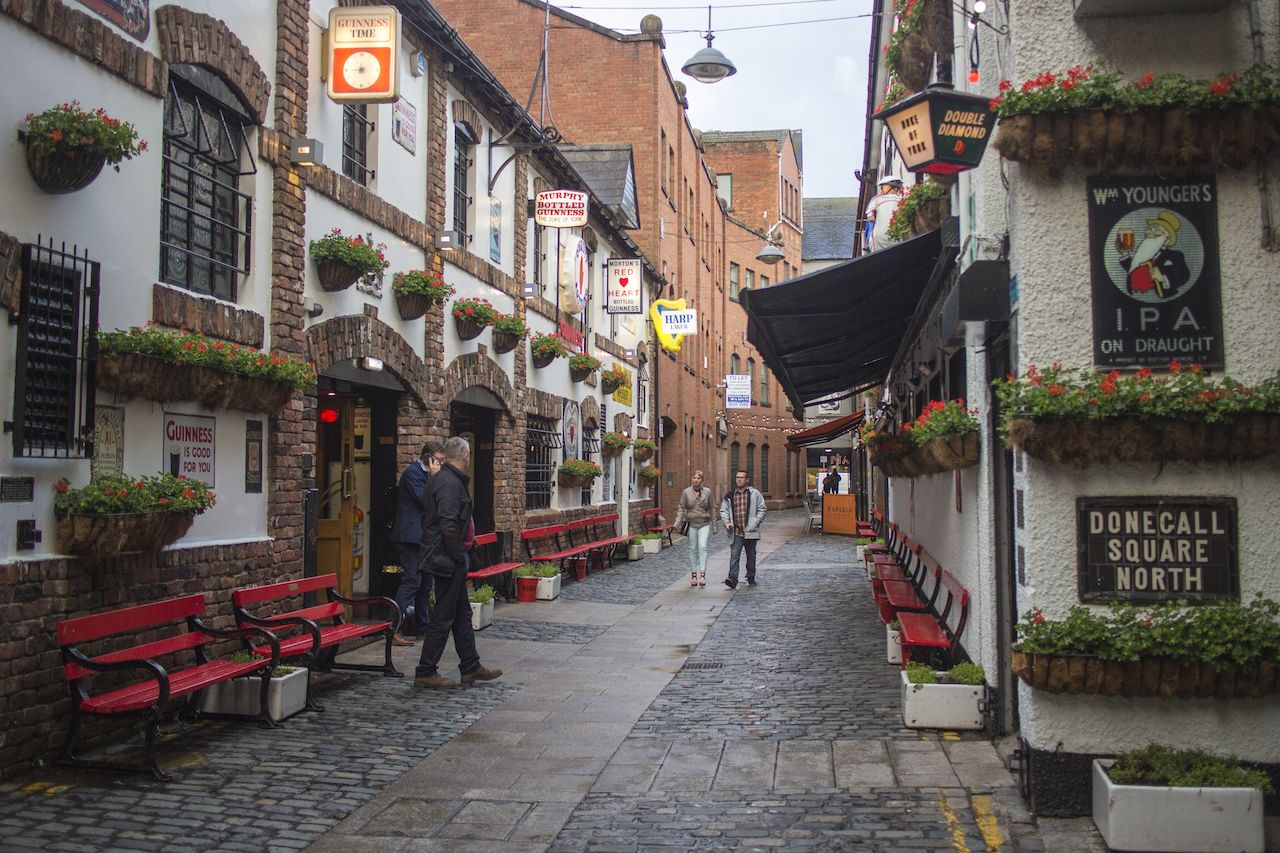 Cathedral Quarter — This quarter takes its name from the adjacent St. Anne’s Cathedral, but visitors to this area often come for a pilgrimage of another kind. Indeed, the Cathedral Quarter, comprising the cobbles of Hill Street and Commercial Court, is home to most of the city’s most unique nightlife. This includes the literary John Hewitt bar, named for Belfast’s famous poet, as well as Ollie’s nightclub, situated in the Art Deco vault of the former Ulster Bank headquarters. And there’s more to the Cathedral Quarter than drinking — there are art and photography galleries, performance venues, and some of Belfast’s trendiest new cafes and eateries. 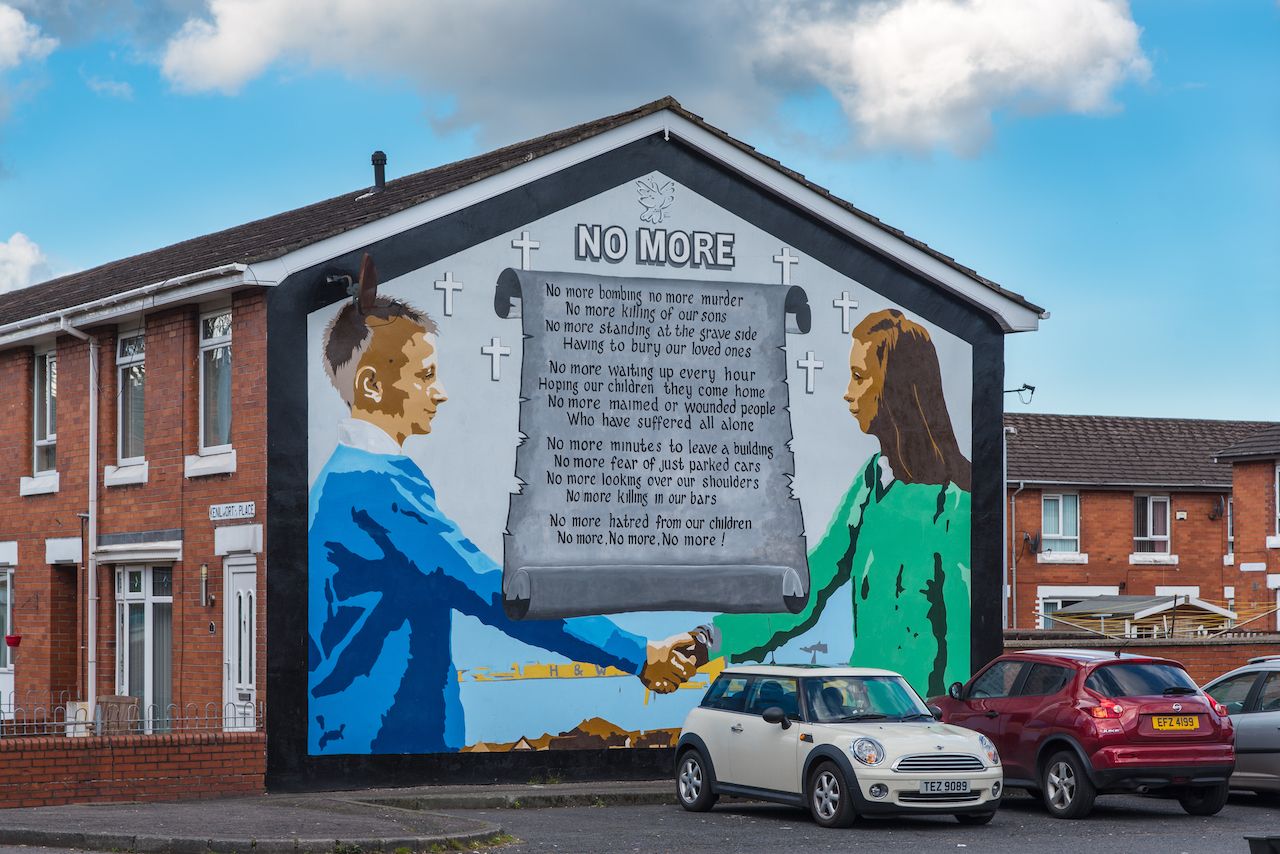 Gaeltacht Quarter — The western edge of the city center is home to Belfast’s most distinctive neighborhood. Gaeltacht simply means “Irish speaking” and, unsurprisingly, it is the home of most of Belfast’s traditional Irish linguistic and cultural activities. Much of this centers around Cultúrlann, a hub of traditional music, performance, and arts. Of Belfast’s quarters, this is the least touched by modern redevelopment. As such, it continues to be home to many small businesses, which mainly cater to the locals. It’s also the site of some of the city’s most striking and often somber street art. Expect depictions of the city’s recent and distant past, many of which have overt political messages. 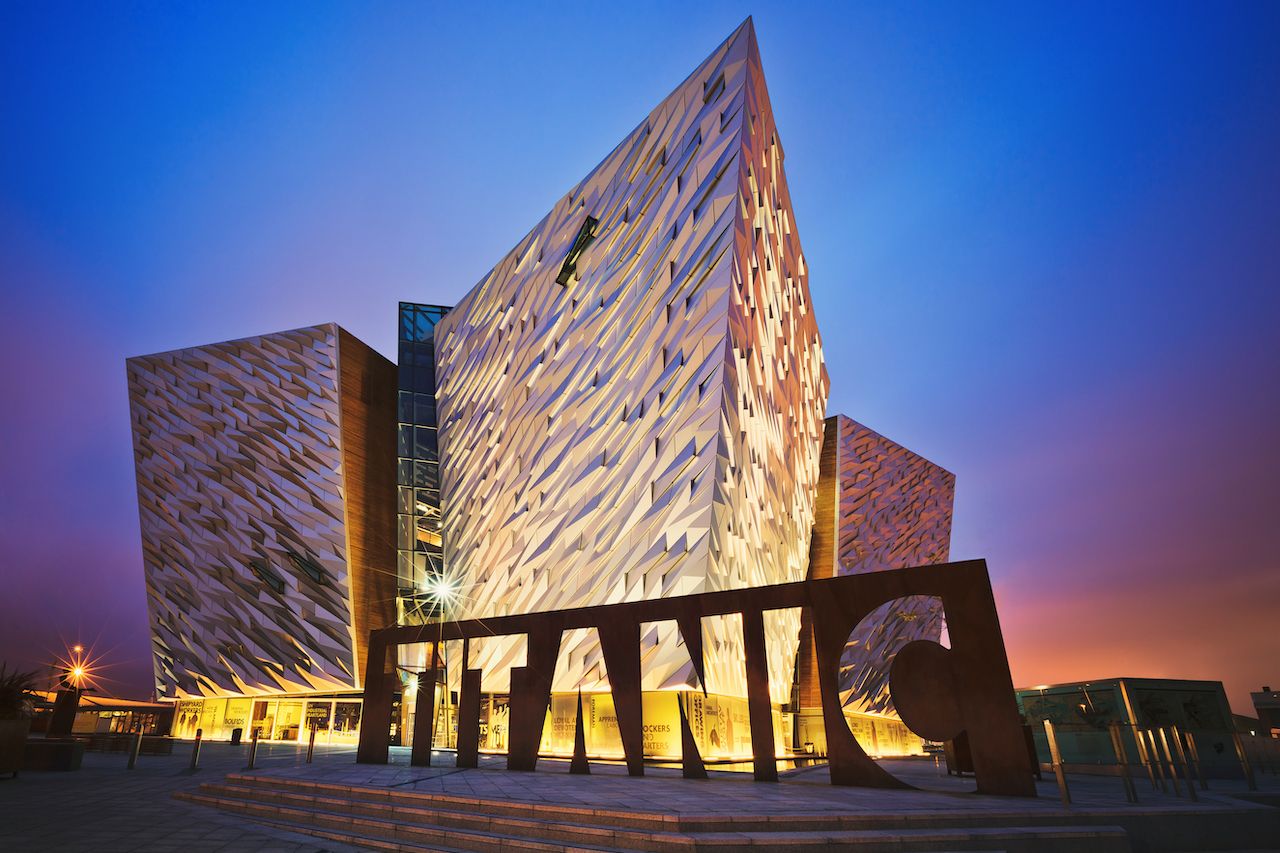 Titanic Quarter — A short walk across the river might feel like stepping into a different world altogether. That’s because the Titanic Quarter is Belfast’s newest district, having been built in the early 2010s on the site of the city’s historic shipyards. Beneath the glass and steel exteriors, the development still harkens back to Belfast’s maritime history, but it certainly doesn’t represent a city stuck in the past. The one-time shipyard now has the massive Titanic museum and a state-of-the-art film studio (where much of Game of Thrones was shot), and the former drawing offices have become the luxury Titanic Hotel. The slipway that launched the ship which gives the Titanic Quarter its name has been turned into a vast public space, which hosts concerts and other events throughout the year. The promenade out to the mouth of the River Lagan displays curios from the peak of Belfast’s maritime history, including the Tory Island lighthouse and HMS Caroline, a WWI ship.

Smithfield and Union — Street art of a very different kind can be found in Smithfield and Union. With bright and abstract patterns adorning most of the recently bare concrete walls, this is Belfast’s most Instagram-friendly neighborhood. It also acts as a counterbalance to some of Belfast’s more established nightlife areas. Since work began on the nearby Ulster University campus in 2013, several bohemian, underground pubs have emerged around Library Street. For decades, Union Street and Upper Donegal Street have been the center of the local LGBTQ+ nightlife, with a growing number of bars, clubs, and even saunas. Visitors may even be surprised to find a statue of Vladimir Lenin over the entrance of the famous Kremlin. 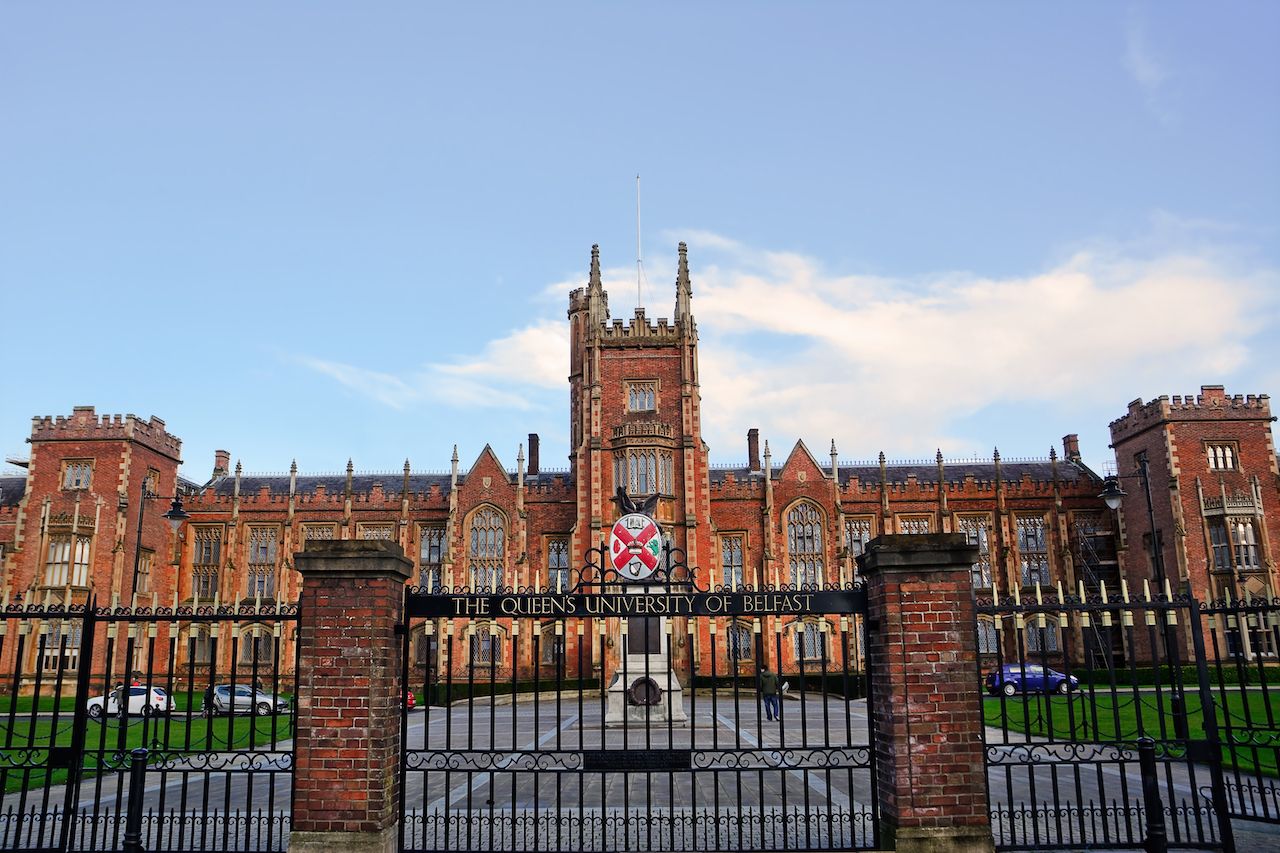 Queen’s Quarter — A short walk south of the city center is Queen’s University. It has everything you’d expect from a Victorian university campus, including tree-lined residential streets and the Gothic grandiosity of the Lanyon Building. You’ll also find all the trappings of a modern university campus, like independent books shops, cheap grub, and most of Belfast’s 20,000 students. In the 19th century, the Queen’s Quarter was home to many of Belfast’s more affluent residents, and as such, you can indulge in many of the Victorians’ favorite leisure activities, such as a stroll around the newly refurbished Botanic Gardens or a visit to the Ulster Museum’s Egyptian collection. If that’s not quite your speed, the university area’s bars and cafes draw a much younger crowd than the rest of Belfast with live music and beer pong.