CHOOSING THE RIGHT HOTEL for your trip to Vegas can be daunting: there is the Strip, and then there is…not the Strip? If you choose to stay on the Strip, note that the properties might seem close to each other, but it’s not advisable or realistic to walk from one end of the Strip to the other just for a bar or restaurant. You want to stay somewhere that has places you want to go and things you want to do and see, both on the property and in the immediate vicinity.

The best places away from The Strip

Downtown Las Vegas — known for the LED canopy-covered Fremont Street and for being the last remnant of “Old Vegas” — is what many consider to be the “real” Vegas. And while it can certainly get a bit tricky making claims to what is the most authentically inauthentic area of Vegas, Downtown Vegas is certainly a lot more down and dirty, and ridiculous than the Strip. 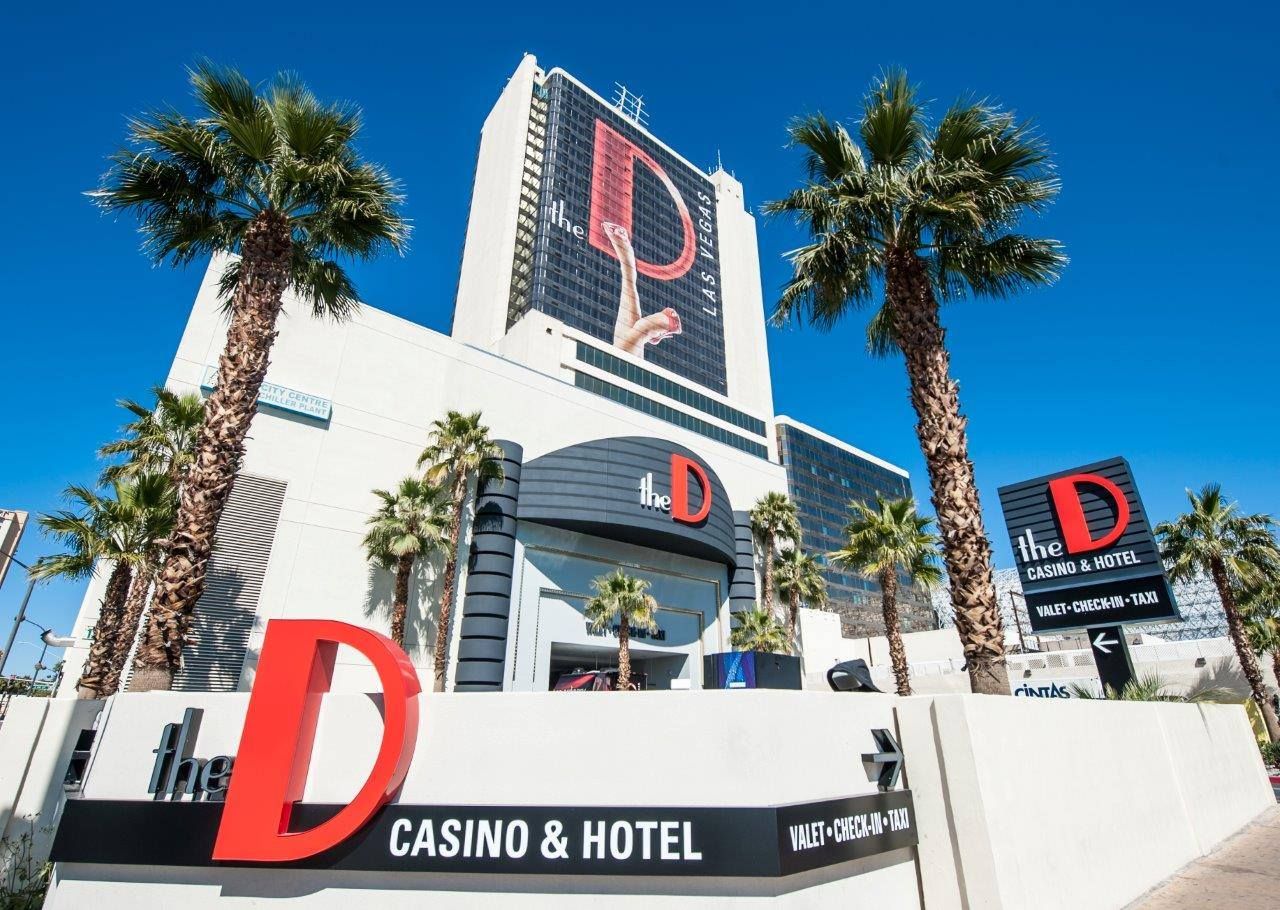 Staying at The D Casino & Hotel means you’re right in the center of all the Fremont action. The casino has a loose “Detroit” theme (the owner is from metro Detroit since you will inevitably wonder) with restaurants like Andiamo Steakhouse and American Coney Island that are Motor City exports. But The D’s real draw is the 100-foot-long LONGBAR located on the casino floor and the outdoor D Bar, best known for its flair bartending, and dancing servers.

Located next to The D, Four Queens is also in the heart of all the Fremont action, but with a bit more of that “Old Vegas” appeal. The rooms are dated but comfortable, but if you’re going to stay here then you absolutely must pay a visit to Hugo’s Cellar, a true old-school steakhouse where the maître d’ wears a tuxedo and every woman receives a rose (take THAT, Bachelor!). 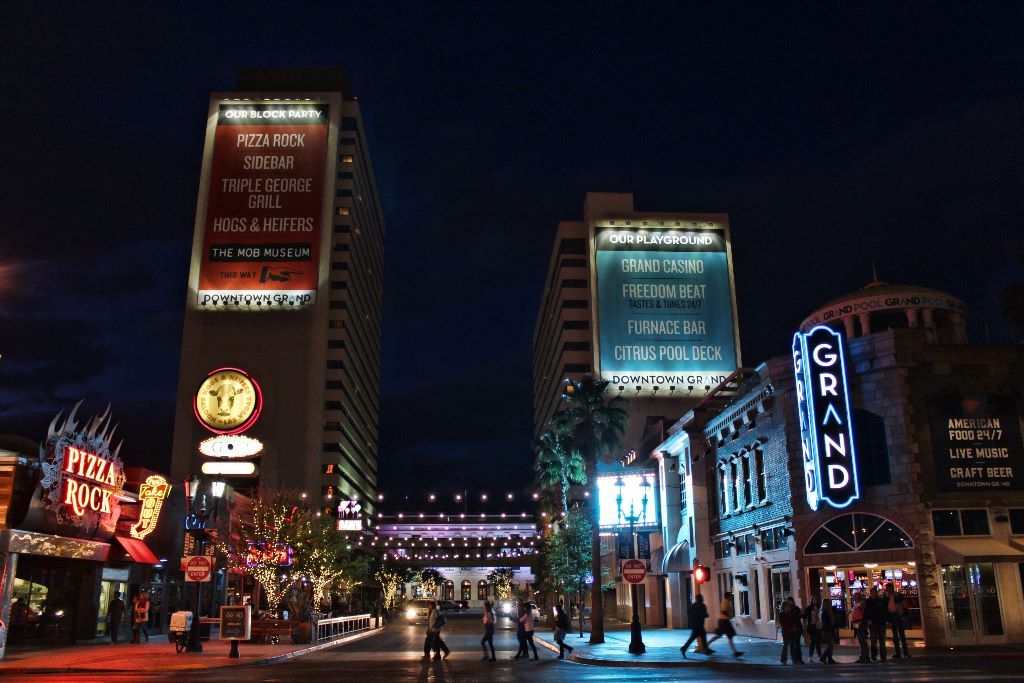 For those looking for something a little more updated, the Downtown Grand is located a block from Fremont with a bit more of a contemporary appeal. Their rooftop pool deck is an excellent downtown party spot.

The Oasis at Gold Spike 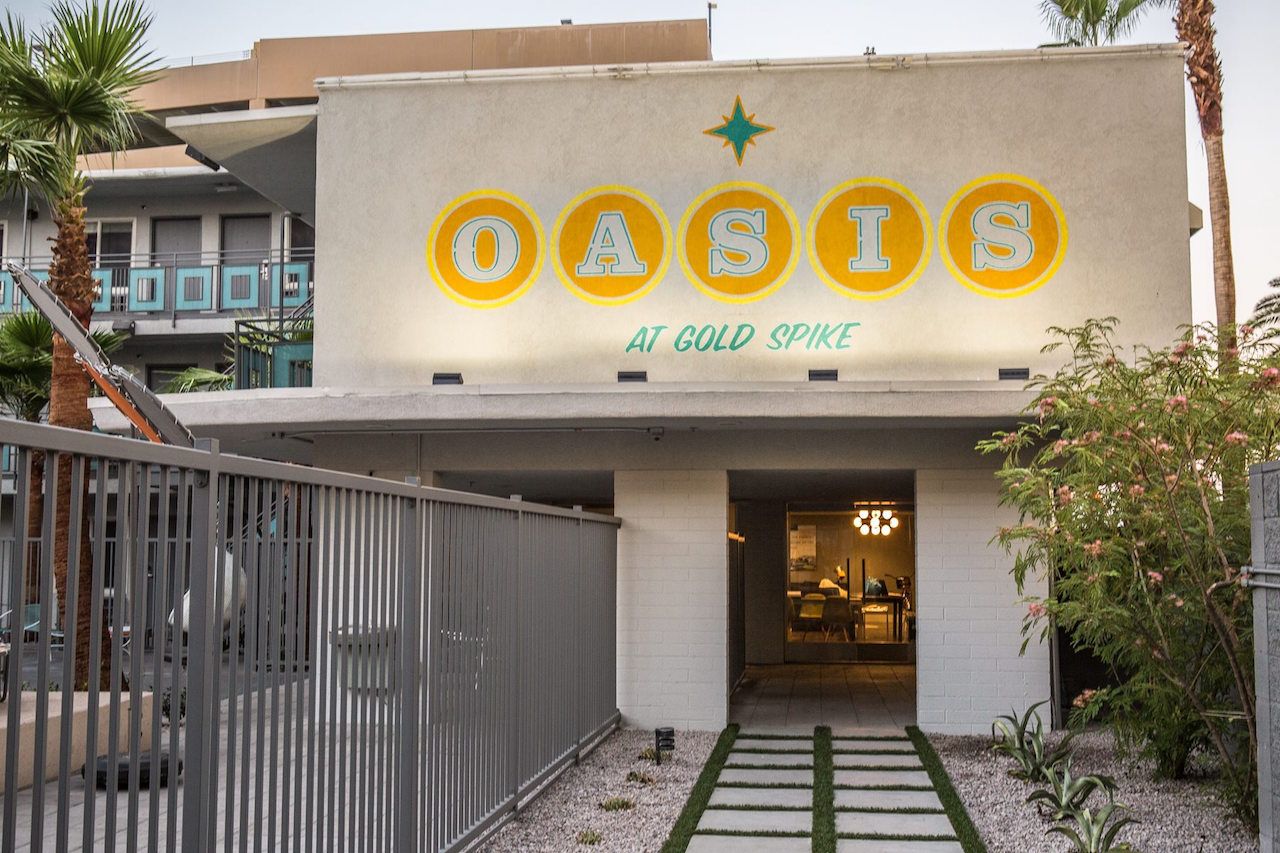 And finally, fully representing DTLV, as the Millennials who work and live here have dubbed it, the Oasis at Gold Spike is the hipster chic boutique hotel of downtown, complete with its own adjoining bar and live music venue, a vinyl library, and beach cruiser bike rentals. 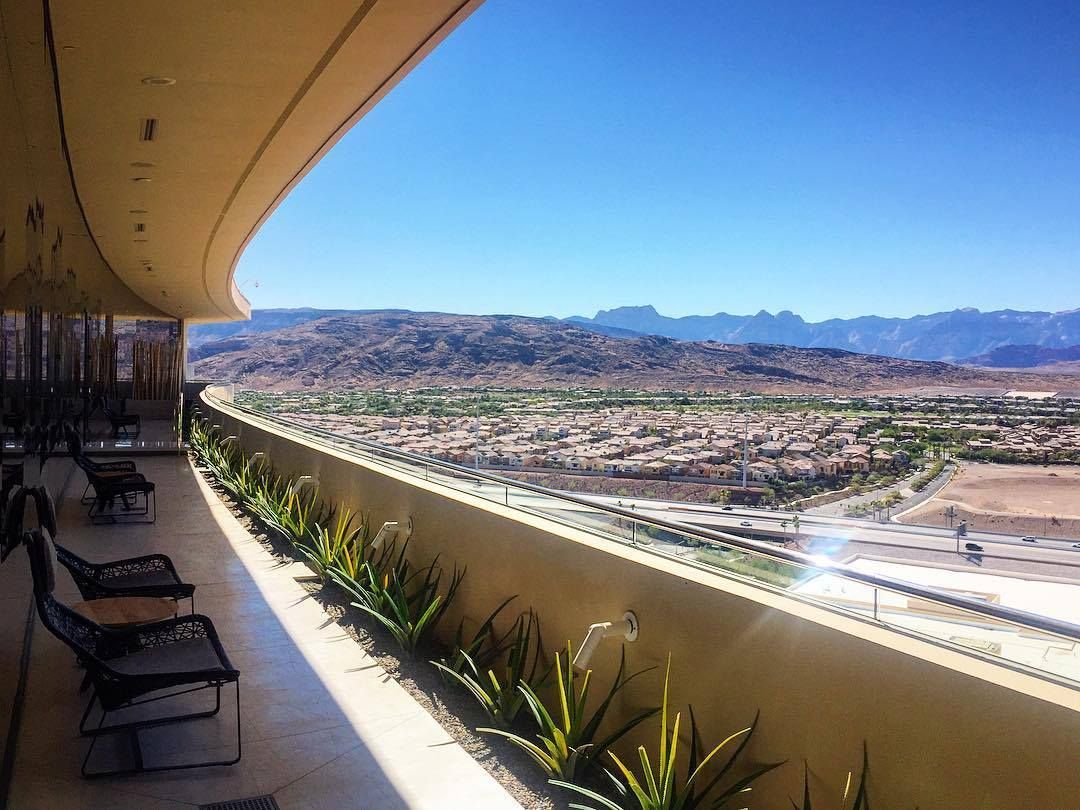 If you’re here to experience the awe-inspiring wonders of the great outdoors, you will want to stay in Summerlin in close proximity to the Red Rock Canyon National Recreation Area. The Red Rock Casino Resort & Spa is the best of all worlds, with great rooms, restaurants, and amenities (including a beautiful pool and spa). It’s also just a 15-minute drive from Red Rock when you’re ready to make your outdoor escape, and a 20-minute drive to the Strip when you’re ready to take on a whole different kind of wild. 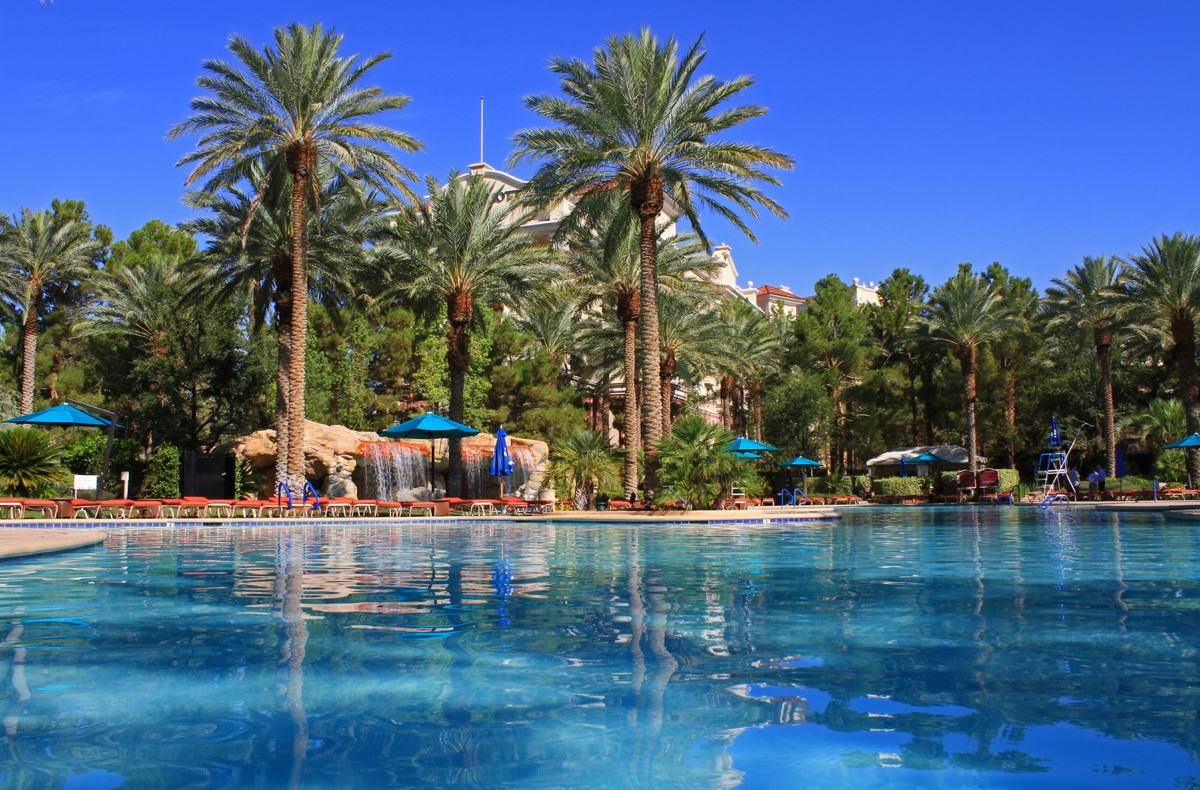 For something even posher and a bit more removed from the madding crowds, the JW Marriott Las Vegas Resort & Casino offers all the understated pampering fans of the JW brand have come to expect — as well as 50 acres of maintained garden landscape. It is also located near some of the top golf courses in Las Vegas. 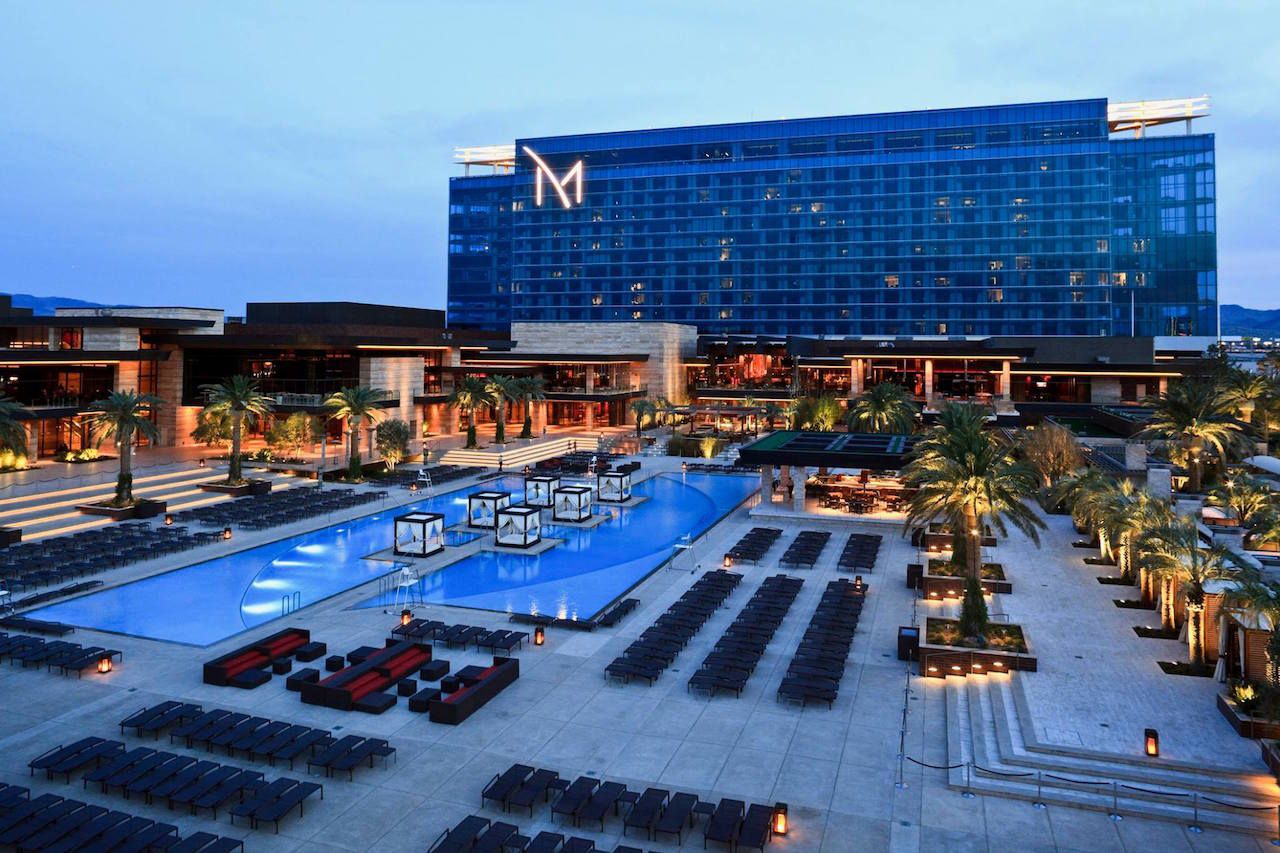 20 minutes from the Strip in the other direction is the relaxed suburb of Henderson. The M Resort Spa Casino offers Strip-style accommodations and amenities without the Strip prices — and an excellent assortment of bars and restaurants. 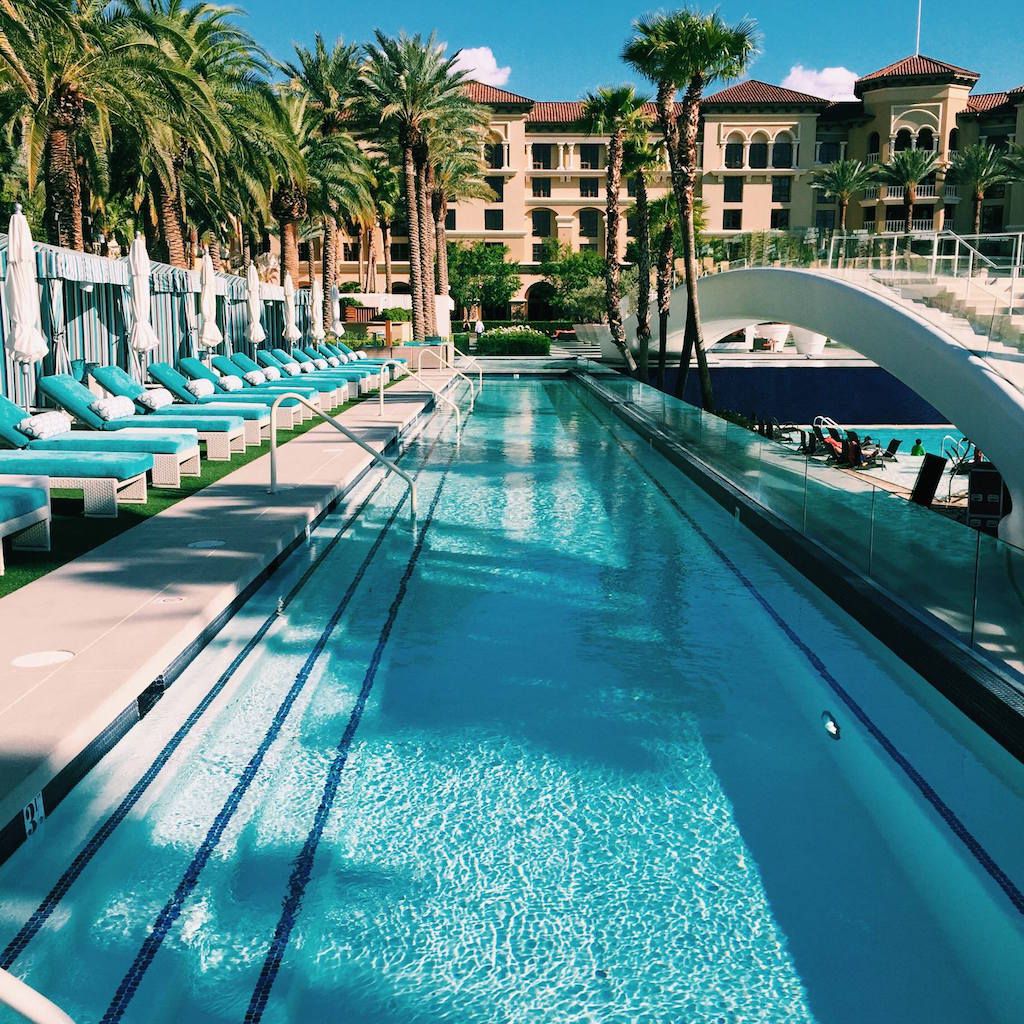 A little further east is Green Valley Ranch, this is a sister property to Red Rock Resort and as well-appointed. To get to the casino and resort you have to first pass through The District at Green Valley Ranch, a large outdoor retail and entertainment district that serves as an extension of GVR, making it a self-contained destination.

The best hotels on The Strip

The Strip is one of the most visited tourist attractions in the world. You have a large choice of places when you stay on The Strip, with options for every budget and style, but these are some of our favorites. 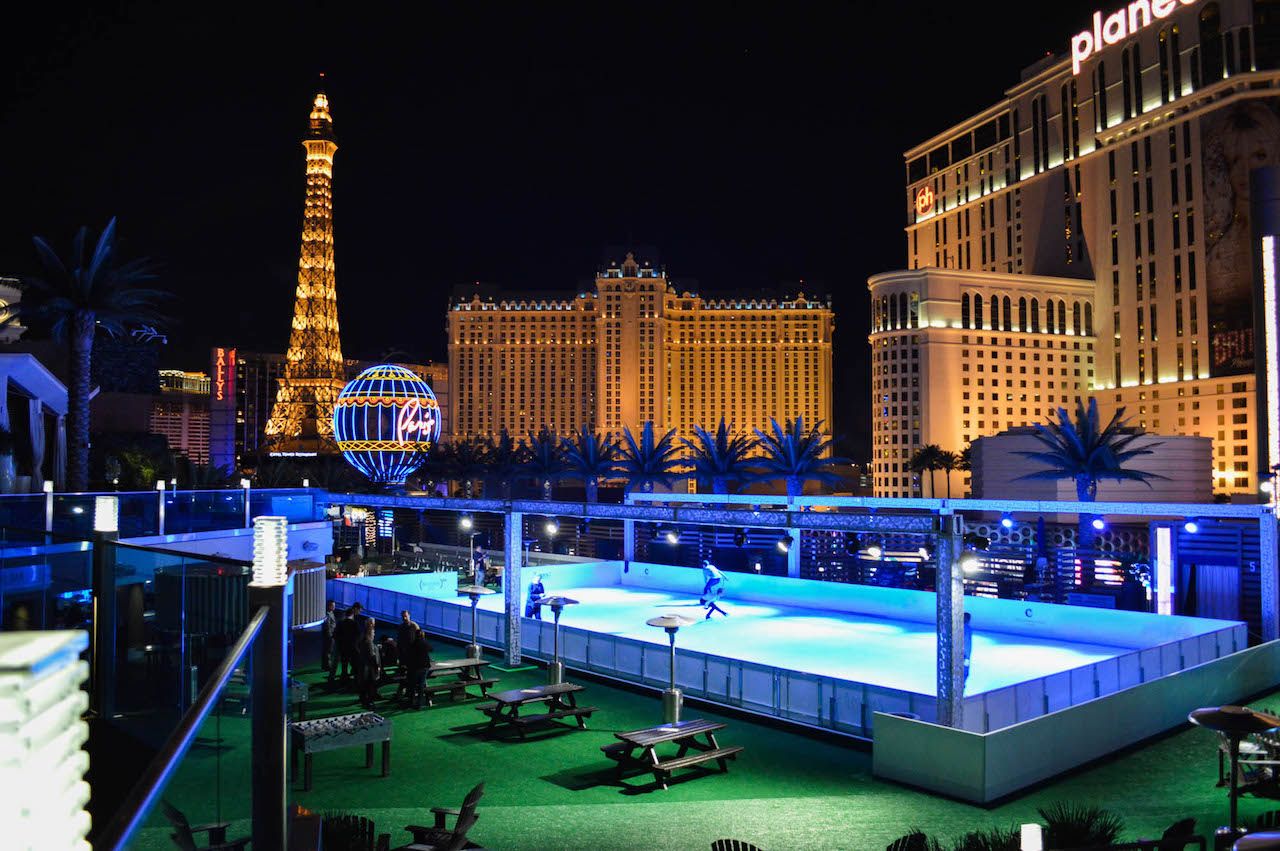 Photo: The Cosmopolitan of Las Vegas

You really can’t beat The Cosmopolitan when it comes to style or location. It has the best rooms, the best restaurants, and (arguably) the best day and nightlife. This place has been at the top of its game since it opened, and while places like the Cromwell and SLS have tried to steal a bit of its crystal-encrusted style, The Strip has yet to see anywhere else that compares. 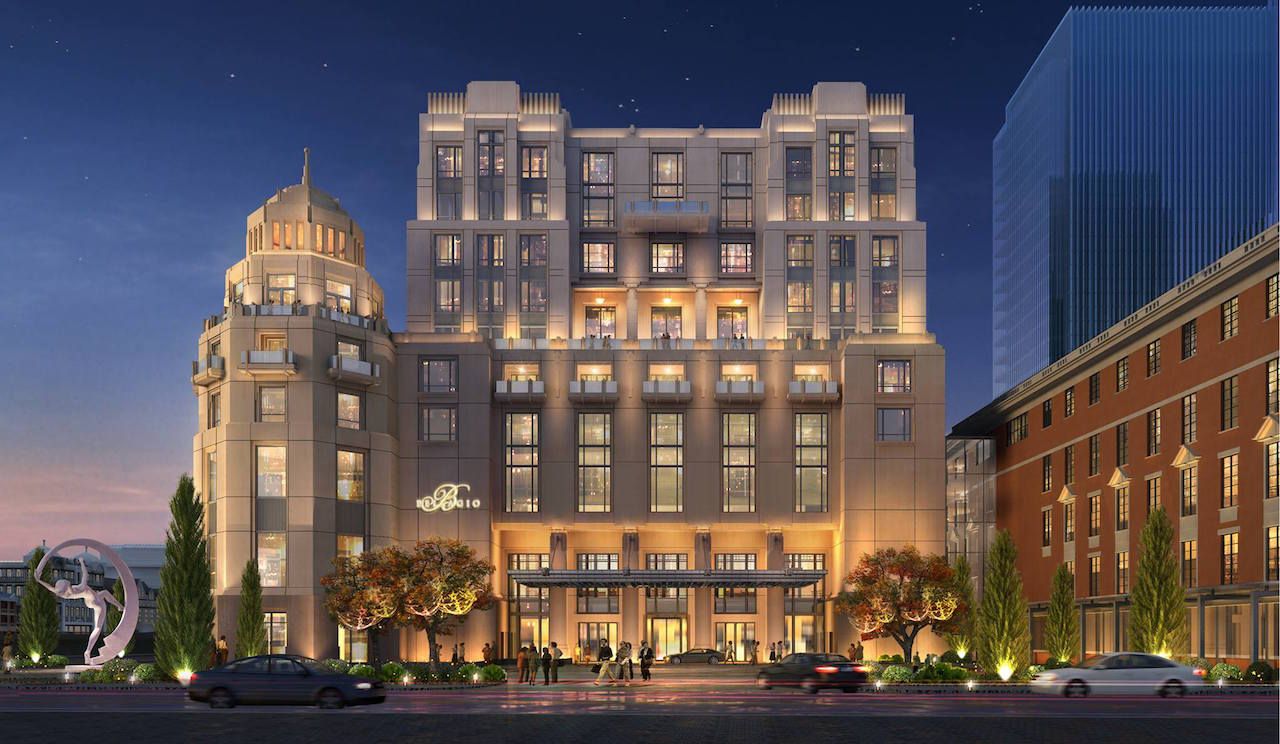 For something that’s more of a modern Vegas classic, the Bellagio is probably the most iconic resort on The Strip, from the Bellagio Conservatory & Botanical Garden to the Chihuly sculpture adorning the lobby ceiling, and, of course, the dancing fountains. The Bellagio is Vegas. 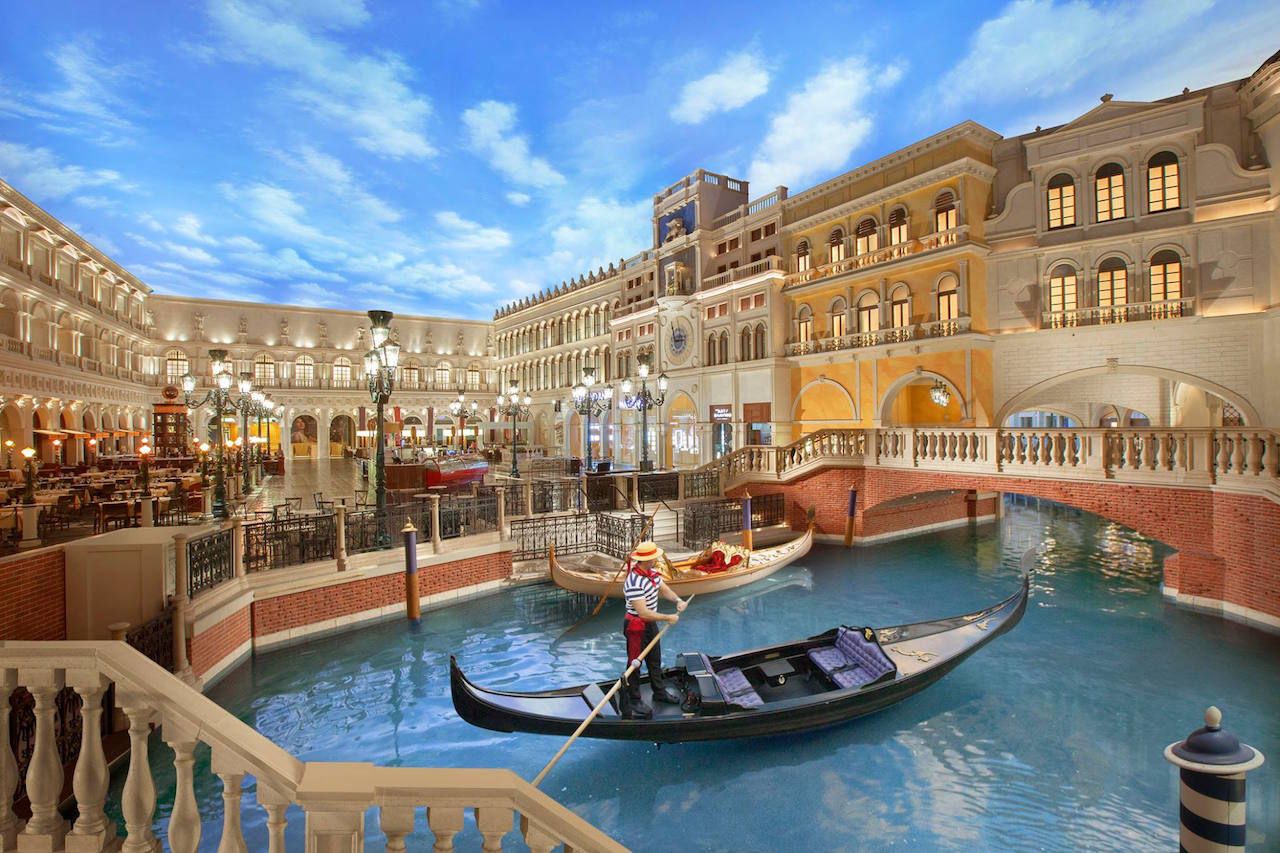 For a bit more of that over-the-top gilded luxury that Vegas is known for, The Palazzo has over 3,000 of the largest standard suites on the Strip, each with a sunken living room and a massive bathroom lined in Italian marble. The Palazzo Pool Deck is also one of the best in Vegas. 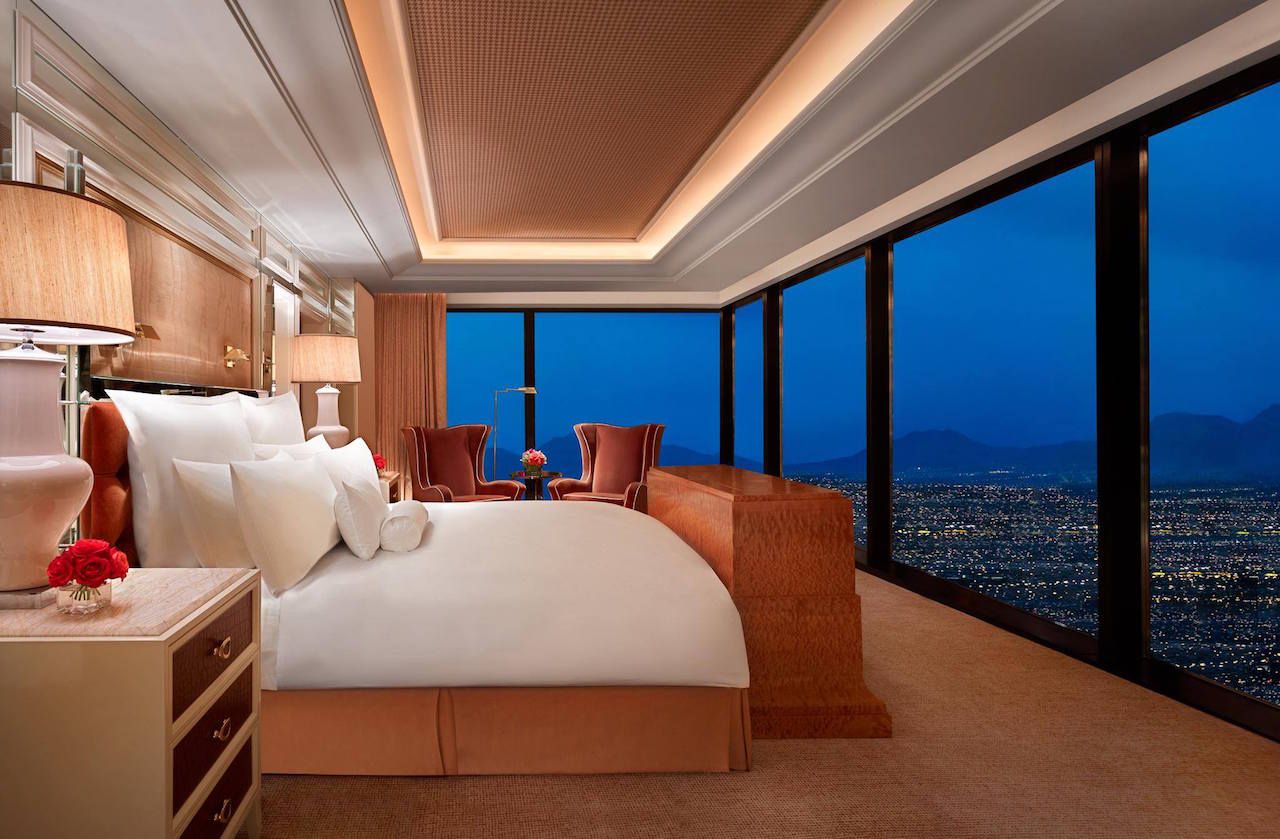 If you want the absolute best of Vegas luxury but don’t quite have high roller status, the standard rooms at the Encore Resort will allow you to live in the lap of luxury while still being in spitting distance of affordable (if “affordable” means “splurging without going bankrupt”). And that kind of luxury isn’t staid or stuffy — the Encore Beach Club is one of the best day/nightclubs in Vegas.

The Mansion at MGM Grand 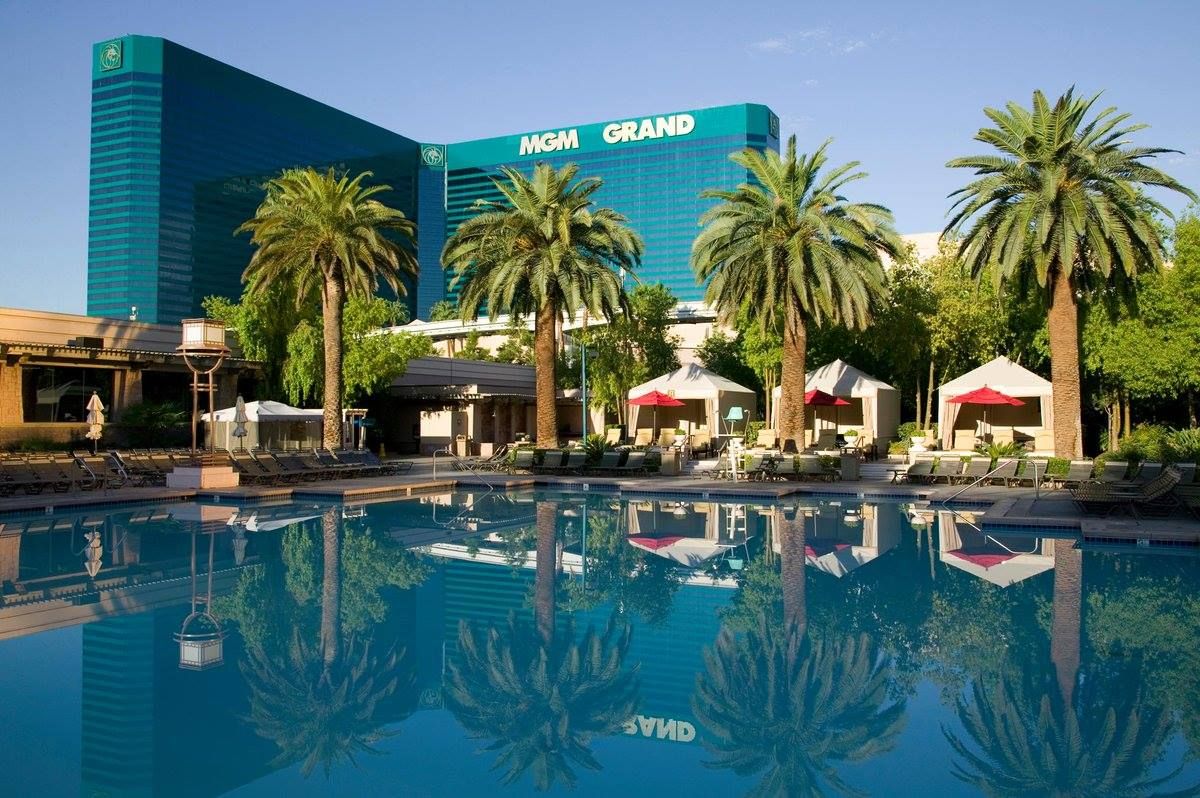 Las Vegas is home to several hotels-within-hotels, some well-known and others more of a secret exclusively for the very rich and very famous. Completely hidden from outside view and with a private, unmarked entrance, The Mansion at MGM Grand is peak Vegas exclusivity. Guests are chauffeured around in Rolls Royce Phantoms, and each of the 29 private villas has its own full-time butler. The price tag on a place like this is such that if you have to ask, you can’t afford it (but starts at $5,000 per night).

The Nobu Villa at the Nobu Hotel Caesars Palace 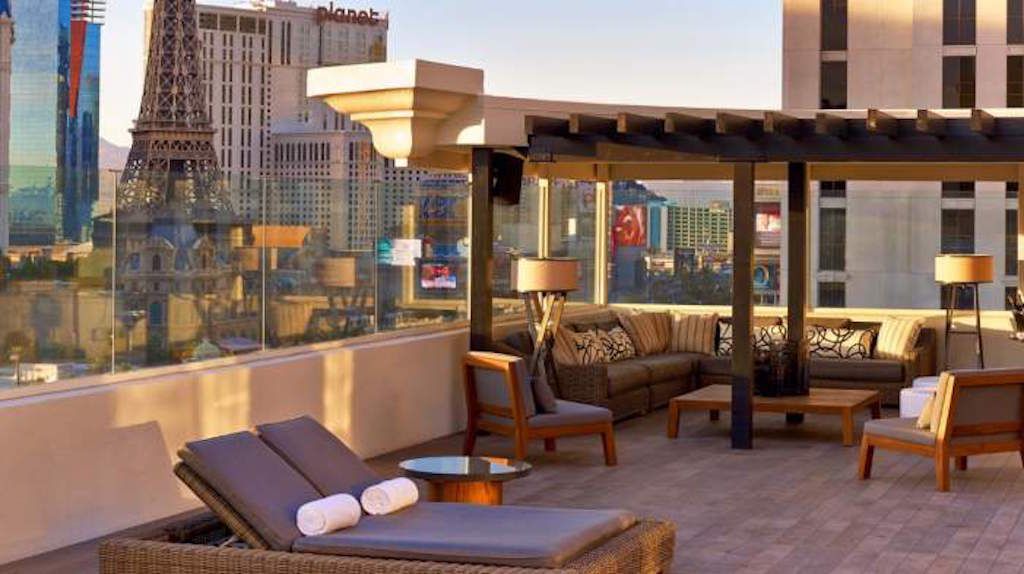 But if 5k per night doesn’t make you bat an eyelash, then The Nobu Villa at the Nobu Hotel Caesars Palace might be for you. The 10,300-square-foot three-bedroom rooftop villa goes for $35,000 per night, and that’s all that needs to be said about that. 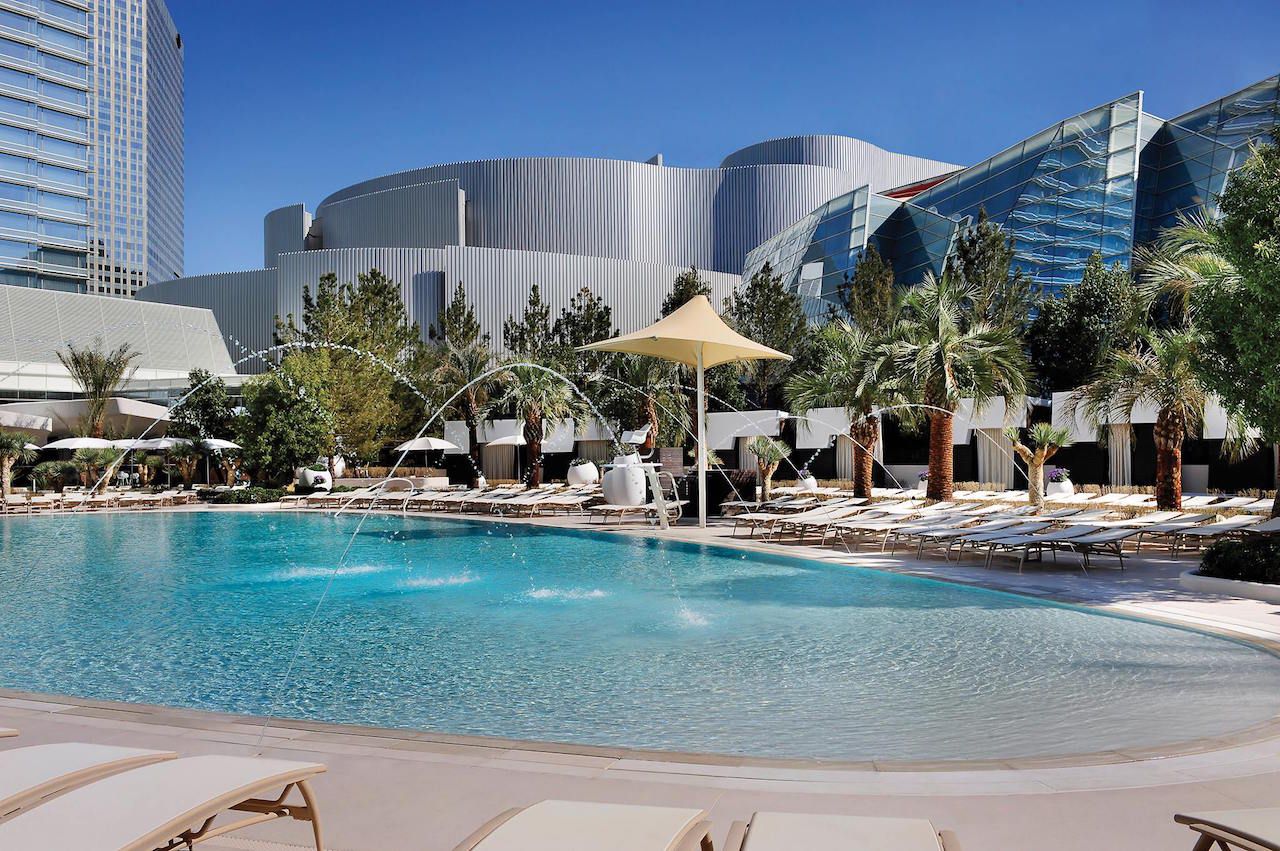 For something just as opulent but a bit more affordable, the ARIA Sky Suites have their own dedicated tower of the ARIA resort, complete with their own gated driveway and private lobby with VIP check-in. The best part is you can stay in one of these suites for as little as $700 (!) per night. 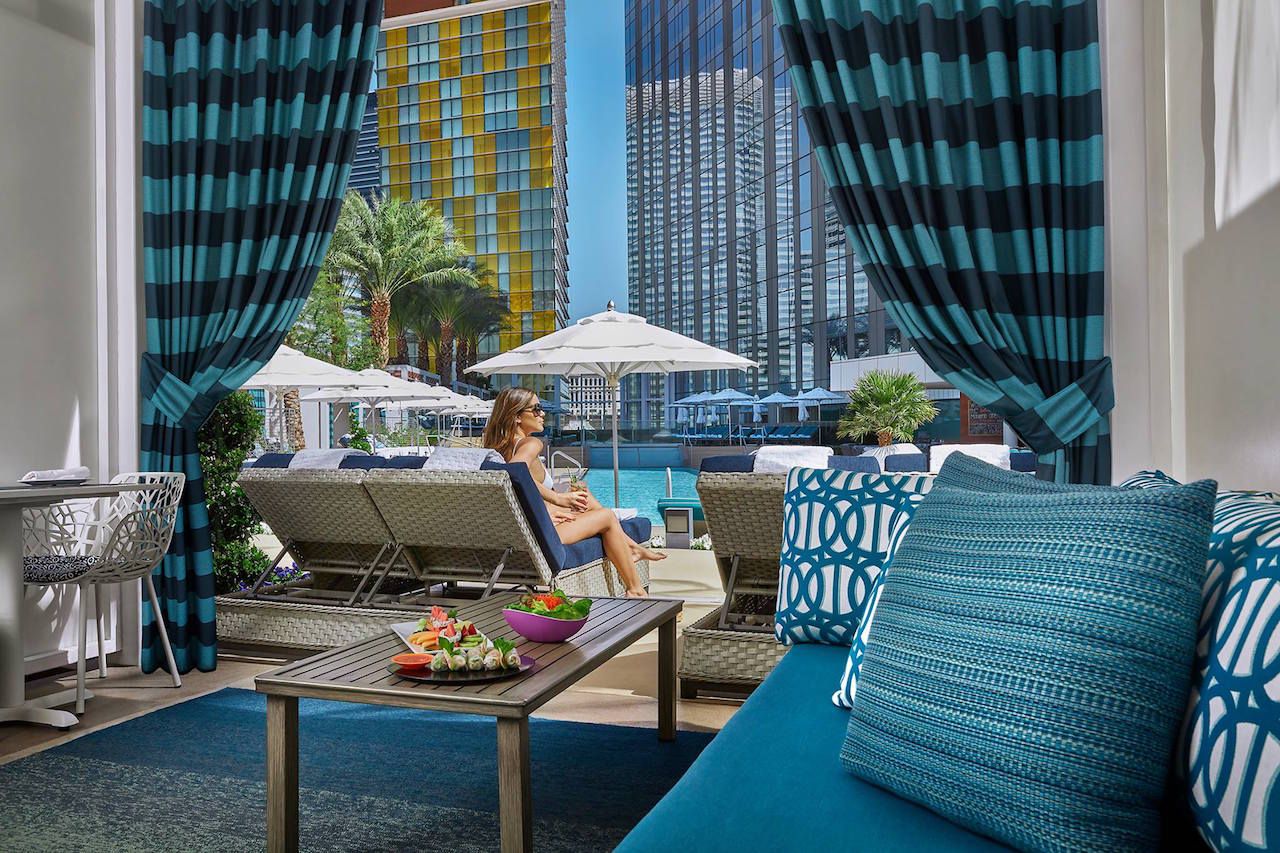 The Mandarin Oriental remains a reliable standard of luxury, sweeping pretty much every 5-star category out there as a self-contained high-rise hotel and condominium development with the best views anywhere on the Strip.

The best hotels for couples 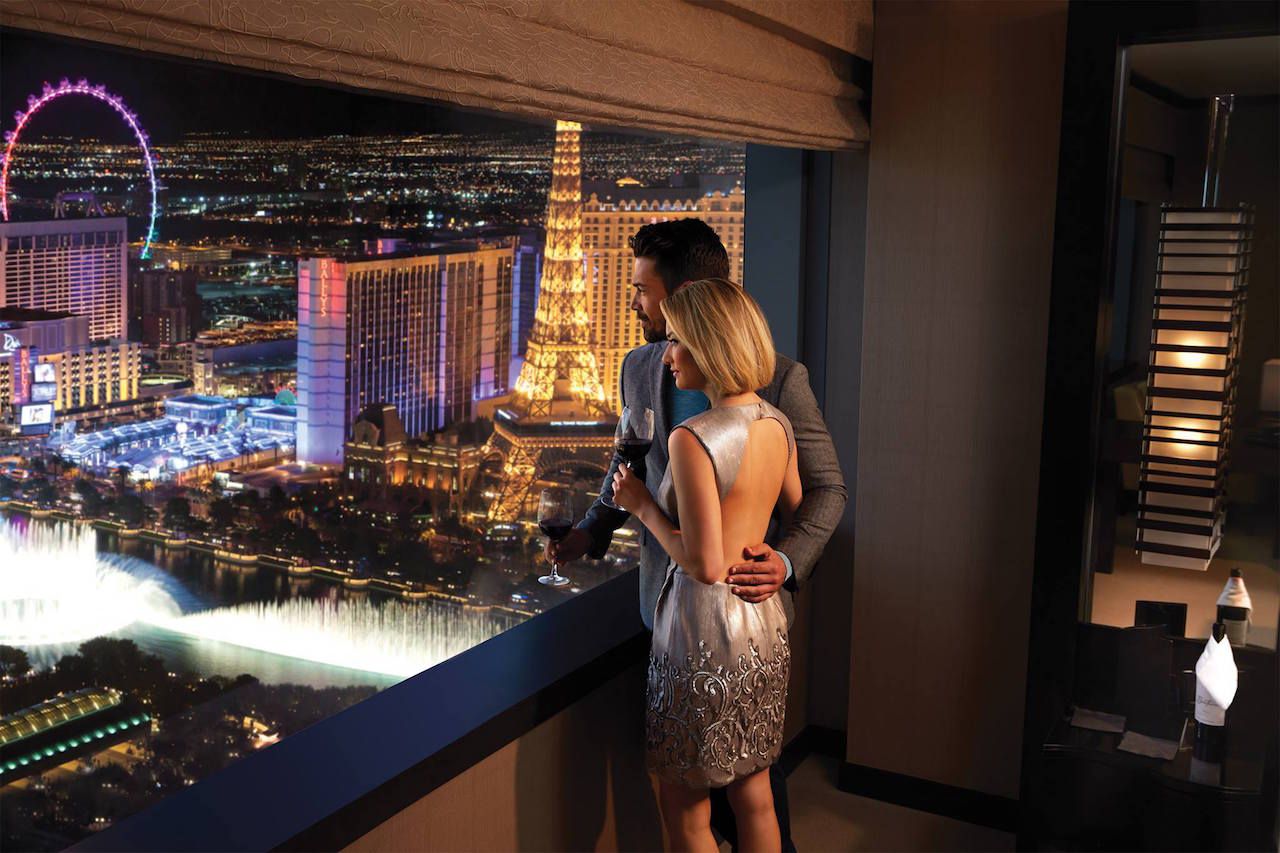 There aren’t a lot of upscale resorts on The Strip that are non-gaming, which makes the Vdara Hotel & Spa located in the City Center development unique. There are no raucous clubs here and dining options are limited; this place is about the pampered spa life, and as such offers one of the best spa experiences on the Strip. As they say, the couple that spas together… 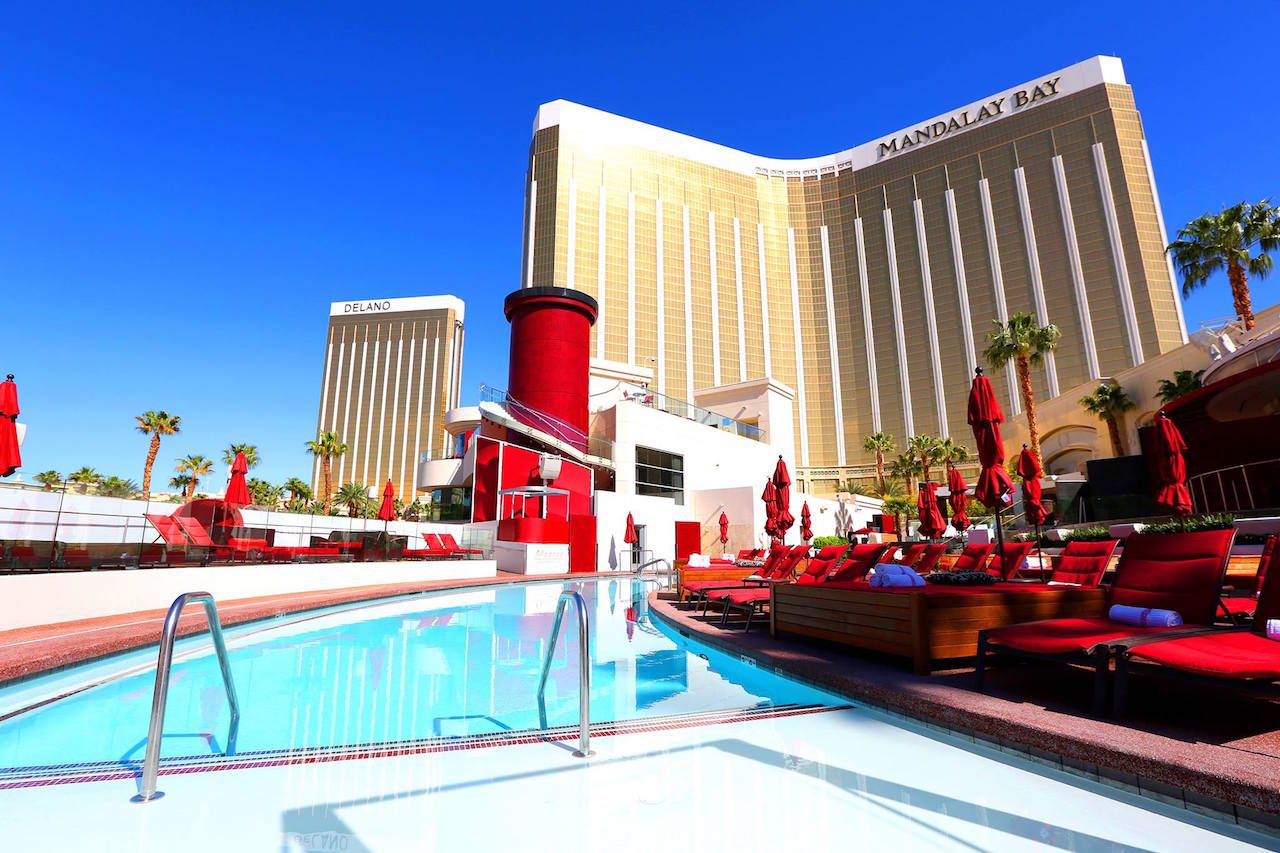 The Delano Las Vegas is another non-gaming high-rise on the Strip, connected to but separate from Mandalay Bay. Where Mandalay invites chaos, the Delano is an oasis of calm, with one of the best views in Vegas at the tower-topping Skyfall Lounge. For couples that want to feel secluded while still near the Strip action, the Delano is an excellent option.

The SKYLOFTS at MGM Grand

The SKYLOFTS at MGM Grand are another hotel-within-a-hotel within the sprawling MGM Grand complex. A “boutique” hotel located on the top floor of the MGM Grand, the SKYLOFTS has its own private entrance lobby and cab stand. Each of the 51 units (available in one-, two-, and three-bedrooms) has two floors and is more like a private residence with its own dedicated staff. For couples in search of privacy with a little bit of money to spend, this is a good spot to spend it. 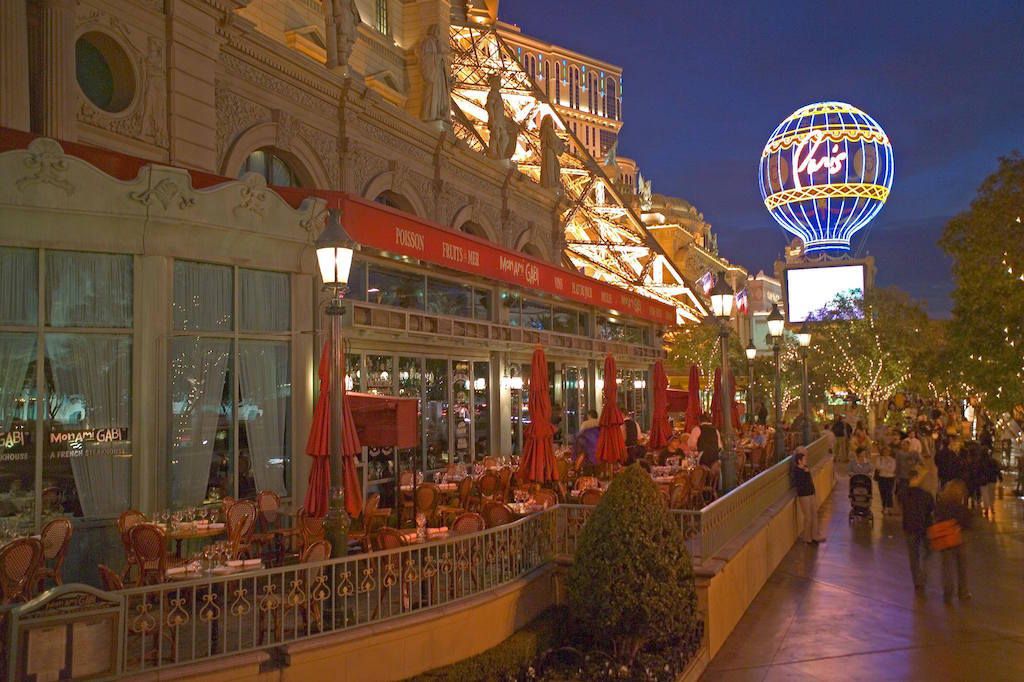 Paris might be the most romantic city in the world, but traveling overseas isn’t always an option for everyone. The Paris Las Vegas Hotel & Casino is the next best thing to actual Paris, complete with its own Eiffel Tower and Arc de Triomphe. Dinner at the Eiffel Tower Restaurant overlooking the Bellagio Fountains is pretty much one of the most romantic things a couple can do in Vegas, and even the casino’s center bar, Le Central, offers mood-making chandelier grandeur. Plus, it’s a very affordable option, as far as centrally-located Strip hotels go.

Las Vegas: The Best Times of the Year To Visit and Why

Las Vegas: The Top Family-Friendly Hotels and the Best Shows for Kids

Drinking in Las Vegas: Where To Find the Best Bars

The Top Las Vegas Night Clubs To Unleash Your Wild Side

29 Things To Do for Free in Las Vegas

The 7 Coolest Neighborhoods in Las Vegas: Where To Stay, Eat, and Party

Traveling To Las Vegas: Where To Have the Most Fun With the Kids