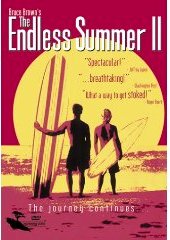 This documentary film is the sequel to Endless Summer in which two surfers follow the footsteps of surf gods, Mike Hynson and Robert August.

In Endless Summer II, the goal of the trip is to find the best waves around the world in places such as South Africa, Costa Rica, France, Bali, and other exotic locations while avoiding the cold currents of winter.

Monster waves, hi jinx, attractive locals, and magnificent views of the film will “fuel” the wanderlust of any potential surfer or traveler.

Every time I feel the urge to travel, I watch Endless Summer to get my plans and ideas flowing.

Whether I plan to go surfing is negligible, but as a viewer, the movie’s direction takes you to great waves as well as through the culture of the places the guys surf.