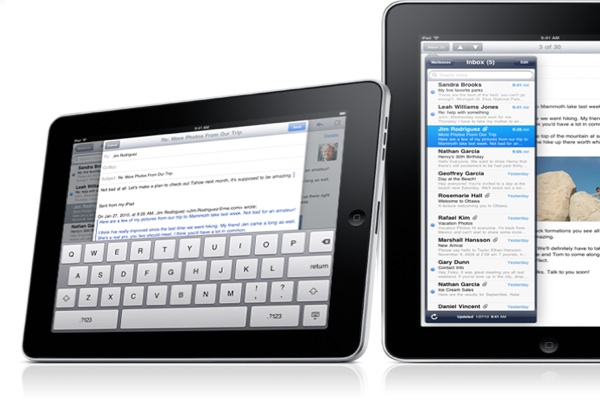 The name…the features…the lack of features…today it’s all about the latest from Apple.
class>

The tablet exists, and it’s called the iPad – a questionable name both because it sounds too close to iPod, and because it’s kind of easy to poke fun at. (Upgrade to the Maxi iPad, anyone?)

For the first half of the unveiling – particularly when no one had breathed a word about 3G – I was admittedly disappointed. This isn’t a big iPhone, I thought. It’s a big iPod Touch. Letdown.

But my inner geek told me to have faith in Apple, and the more I saw the product and thought about the features, the more I started to understand why the iPad has caused such a ruckus. And as a traveler, a writer, and a book addict with high interest in the future of publishing, I think it’s more than just a big Touch. Much more. 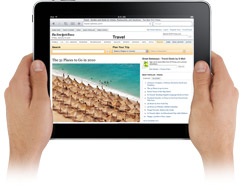 No calls yet (check out the vid below for employees talking about the possibility.) No SD card slot or USB port yet, although there’s a way to get around that with adapters already. Battery life will always improve.

So no, you don’t need the iPad. Just like you don’t need an iPhone, a Blackberry, an ereader, even – dare I say it – a laptop. The iPad will develop, it will grow, it will improve just like all gadgets have in the last decade. What we’re seeing is the beginning of all these things and more morphing into one amazing toy. Something that will help newspapers, print magazines, and the publishing industry in general reinvent their business as long as they pull their heads out of their asses and take a look at what’s possible.

The basic iPhone was $500 when it was first released. Same for the iPad (something Apple investors apparently found important.) Already, this isn’t some product unattainable for pretty much everyone. I’m not running out to buy one, but that doesn’t mean I’m not excited about it. Because when my MacBook starts to show signs of nearing its end in a few years, I will be looking into the iPad as a replacement (after an appropriate period of mourning, of course).

This is where we’re going. The question is, how will we – travelers, writers, bloggers, developers, publishers – react to this change as it starts?

What do you think of the iPad? Share your thoughts in the comments below!