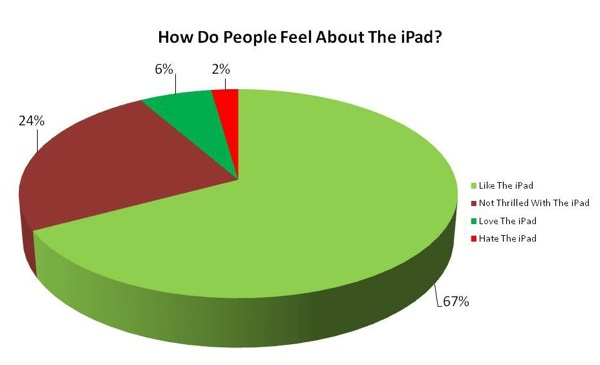 Attensity created this graphic based on a sampling of 50,000 tweets related to the iPad, which were analyzed to discern how gadget geeks feel about the latest from Apple. Overall, Steve Jobs should be pretty happy with his tweeple.

Attensity also took a look at what folks like most about the iPad, with the majority naming Apple’s large selection of applications as the number one reason. The most popular application, according to their survey, was iBooks, with Netflix coming in a close second. The lack of flash support was the number two reason iPad haters cited, with number one being “it won’t replace my iPhone.” (Um, hello…it’s not a phone.)

The analysis shows that the number of people intending to buy an iPad now that the first reviews are out has jumped, with 87% of those polled on Twitter indicating they will join their fellow Apple groupies.