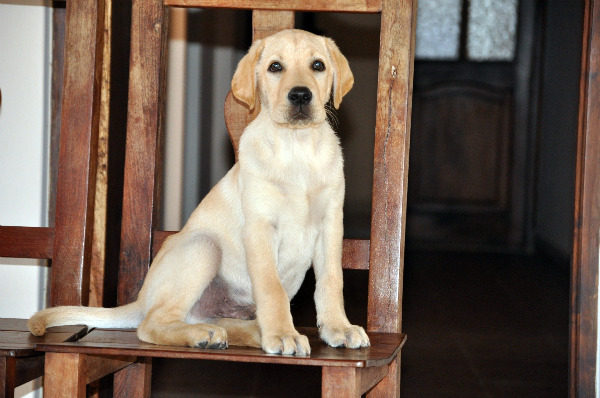 What is the world coming to when a gay dog can’t walk into a restaurant in a civilized society and order a Milkbone? I mean really. Am I taking crazy pills?

When I first heard the story of Nudge, a gay dog, and his blind owner Ian Jolly being refused admittance to Thai Spice, an eatery in Australia, I was stunned. Apparently, the Thai Spice host misheard when Mr. Jolly demanded entrance for his “guide” dog, hearing “gay” dog instead. They assumed the dog had been “desexed.”

Still, at first I gave the restaurant the benefit of the doubt. Maybe it was a joke. Or maybe, as with many restaurants, Thai Spice doesn’t allow dogs because of health code violations or because many people simply don’t feel comfortable watching a large mutt licking his genitals over lunch.

As I read further, though, I began to realize this is no joke at all. 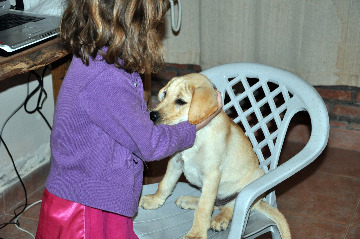 You see, it was not just one person involved in this horrible discrimination. The entire Thai Spice staff banded together to agree that this desexed – clearly another word for gay – dog should not be allowed to dine.

Thankfully, the miscarriage of justice was swiftly made right when the South Australia Equal Rights Tribunal ordered the restaurant owners to send an apology and $1400 in compensation to Mr. Jolly and his dog.

But the damage had already been done.

“I always have that fear now, when I go out,” says Mr Jolly. “I just want to be like everybody else and be able to go out for dinner, to be left alone and just enjoy a meal.”

Yes, because of this egregious incident, Mr Jolly will always live in fear.

Gay Dog Discrimination Hits Home: Is He Or Isn’t He?

I just got a new puppy. He’s only three months old now, but what if my puppy, my sweet little Manuel, is also gay? How would I handle the type of inexcusable discrimination faced by Mr. Jolly and Nudge?

Director Jason Bolicki produced a fabulous video detailing twenty guidelines to help determine whether or not someone is gay. These range from throwing like a girl, to being catty, to the love of dance.

The Case for Mani’s Gayness

He loves to dance. He’s a drama queen. He’s most definitely a whiny bitch and a mama’s boy. Mani adores being center of attention, and not a day goes by I don’t see him running through the yard with his most trusted gal pal, our daughter Lila.

The Case for Mani’s Heterosexuality

He does NOT pepper his dialogue with pop culture references, nor is he into water sports. He actually seems to hate water, as evidenced by his scrambling immediately from the tub every time I try to give him a bath. Thus leading to the next measurement of gayness. He is not at all clean. Mani is unbelievably stinky.

Some measurements were inconclusive. If he’s gay and we, his family, are the last to know, then how exactly would I even know that? I also have no way of gauging how dearly he values education, and I was simply not up to the task of testing to see if he likes a fist in his butt. I’m all for science, but one must draw the line somewhere.

The more I research the topic, the more I find information that contradicts Darwin’s original premise of sexual selection. Males do not exclusively choose female animals for mating. In fact, there’s a very vibrant and vast gay animal kingdom in which over 450 species get it on with the same sex. 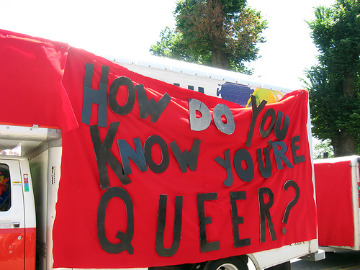 If Mani is, in fact, gay, this presents us as parents with a unique opportunity to teach our now six year old daughter tolerance and equanimity. She will learn that sexual identity is not a reason to discriminate or deny marriage, joint health care or living will rights.

Perhaps this new era of the gay dog will usher in a time of greater peace and understanding. A time in which all people and animals will look one to the other and say, “You’re OK by me.”

Or maybe it’s a sign of the impending apocalypse? I don’t know. I often have trouble discerning between the two.

What do you think about Nudge being refused entry to the restaurant? Do you have a gay pet? Share your thoughts in the comments below.