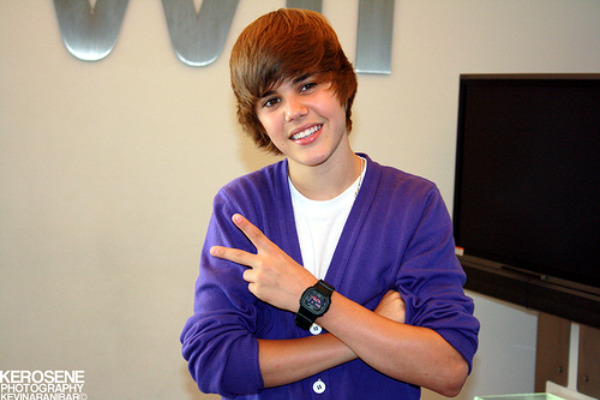 A public vote in a competition results in Justin Bieber being sent to North Korea. Or does it?

It can’t be easy being Justin Bieber. That super-abundance of raw, unique talent, all those adoring fans (or “beliebers”), the ill-timed eruptions of acne when the hormone suppressant therapy starts to wear off. And, recently, being hated on by half the Internet.

For those of you who aren’t quite sure who Justin Bieber is, check out this YouTube video. Prodigious. Talent.

The latest episode of the Bieber cult soap opera was all set to take place in North Korea. This BBC article claims a competition on Bieber’s My World Tour Page asked people to vote on which country he should tour next. Imageboard site 4chan got hold of this and encouraged people to vote for North Korea. It went viral, and hundreds of thousands of votes were submitted in favour of sending him to the People’s Republic.

The article is pretty funny, containing dry observations such as:

It is not known if Kim Jong-il is a fan of Justin Bieber’s music.

Problem is, they didn’t check their facts properly. The competition wasn’t on Bieber’s website, but on a spoof site called Faxo. Needless to say, it wasn’t endorsed by Bieber or his record label. (The BBC have since printed a correction.)

Which means that even though 659,141 people voted to send Justin Bieber to tour North Korea, sadly he won’t be going.

Which is a shame, because the newspaper headlines would have been brilliant:

Teen singer Bieber performs to packed crowd of 11 at North Korea’s only disco.

I’d love for Justin Bieber to tour North Korea. It would be a kind of Worst-of-West vs Worst-of-East Death Match. Who knows, maybe he’d even come back a true belieber.

Where would you send Justin Bieber if you got the chance? Let us know in the comments below. Extra karma if you include a newspaper headline of your own.

Tagged
Entertainment North Korea
What did you think of this story?
Meh
Good
Awesome

Why does ‘yellow filter’ keep popping up in American movies? 21 drinking games you can play in any bar Japan will partially pay for domestic travel so you can explore more of the country Dutch government recommends single people have a sex buddy during the lockdown New bill requires airlines to refund your money even if you cancel your flight

On smoking weed in North Korea

20 things I learned in North Korea

A day in the life of Pyongyang, North Korea

Tom Cruise, Elon Musk, and NASA to shoot a movie in space