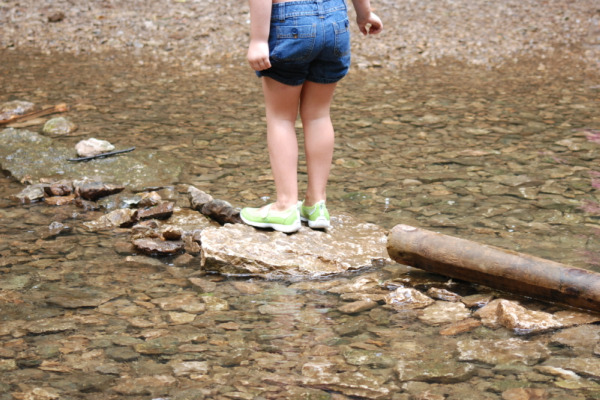 Feature photo: *clarity*/Photo above: tiffanywashko
A few weekends ago, I went hiking with the family by Rio San Lorenzo, about a ten minute walk from our house. Lila loved the idea at first, but as soon as she encountered unwieldy pathways covered with mud and overgrown with weeds, she changed her mind.

Too bad, though, we were already an hour along the path and carrying her was not an option in that particular terrain. She stopped and refused to keep walking.

“I can’t do it,” she cried, my little one’s face all scrunched up with the drama as she stood pathetic and weeping on the river bank. “I can’t!”

I’m not big on rules — which is another discussion altogether — but we do have one in our house that everyone must follow. No one is ever allowed to say “I can’t.”

I’m not big on rules — which is another discussion altogether — but we do have one in our house that everyone must follow. No one is ever allowed to say “I can’t.”

This started because Lila likes to use I can’t when she doesn’t want to do something. Or she doesn’t know how. Or she wants help. Or she’s scared. I can’t get the milk from the fridge. I can’t clean my room. I can’t bring my toys in from the porch. I can’t climb over this rock. When I know full well she can.

It’s great to be a kid and have an adult entirely take care of your needs, and I think that’s much of what childhood should be, but such pampering must also have limits. I’m more than happy to help or do things for Lila as long as she asks. This requires her to

I-can’t circumvents all these important social interaction and self awareness skills. I-can’t implies you are incapable of doing something. It weakens you. It takes away choice and turns you into a victim.

Later in life, who will do for Lila when there’s no parent around? If she doesn’t learn now how to walk into an overwhelming situation and step-by-step conquer it, when will she learn?

As soon as Lila realized I can’t wouldn’t work, she tried another tactic. I’m tired. Let’s do it later. A completely reasonable request, so we stopped and had the picnic I brought along. Thing is, once the food was gone and she had rested, Lila was no more ready to tackle the mud, water and hills than she had been before we stopped.

How many times have you given yourself that out?

Alex Fayle calls this the Someday Syndrome. On his website of the same name, Alex discusses the different methods we employ to try to trick ourselves into believing that it’s OK to push off what we really want or need to do now for another day.

Procrastination comes from one of three things:

Those are the only reasons why people say “I’ll get around to it someday” and if you can overcome those three blocks, you’ll never say that again.

Fear. Procrastination. Distraction. Worrying about the outcome, whether or not we can achieve. Will we fail? All these things are road blocks. If you allow any of them to stop you, you will not reach your goals.

So back to Lila crying piteously in the river as water swirls around her little legs, almost knocking her off balance.

It would be so easy to do it for her, to lift her and put her on land. But doing so won’t get us to the end of the hike. We still had about an hour to go and plenty of rocks, water and sandy hills with little traction. 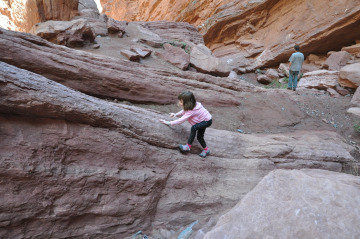 Plus, I know she can do it. I’ve seen her climb steeper hills and navigate more slippery terrain. Add to that, I don’t want to carry her. Nor do I want to stay knee deep in this river for the rest of my life.

When Lila realized she had no choice, that none of her I-cant’s, I’ll-do it-laters or I-don’t-want-tos would change the situation, suddenly she pulled herself together and finished the hike.

Sometimes it really is as simple as that.

Yes, there were times she needed help when crossing a particularly rough and deep patch of water, then I gladly lent a hand. And the next time we went hiking, she didn’t think twice before scrambling up the rocky surface like a happy little monkey.

Ever suffer from Someday Syndrome? What other road blocks stand in the way of your goals and what do you do to bypass them?

For more tips and life lessons from parents check out this photo essay on busy twitter parents. You can also read how Claire Moss’s travels prepared her for parenthood.

Colorado’s new Palisade Plunge is the ultimate mountain bike mega-trail
For the perfect day of hiking and Colombian coffee, head to Jardín
The 11 World Surf Reserves have the most iconic waves on the planet
Woman finds guns, typewriter made of human teeth, and more behind locked door in Airbnb
The longest pedestrian suspension bridge in the world is opening in Portugal