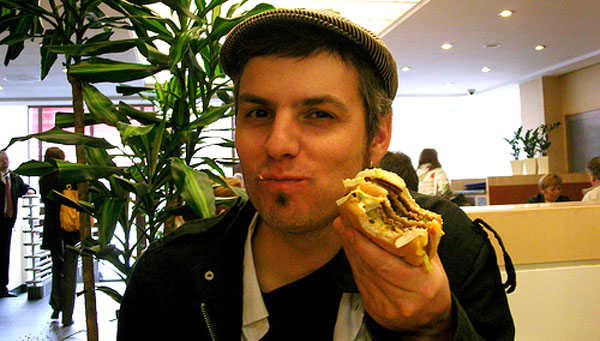 When you are out in the world bemoaning the fact that Americans are often viewed as spoiled, privileged children with no taste and searching for reasons why, perhaps you need look no further than some of the inventions of our very own American fast food chains.

Only a society hell-bent on the instant satisfaction of its basest needs at rock bottom prices could possibly generate the cuisine that follows. Don’t blame other countries for their love-hate relationship with the country that brings addictive, disgusting foods to their cities that both repulse and attract.

They know it’s disgusting and so do you.

I agree with Patton Oswalt that these are one step away from food in a squeezable tube or eating from a trough. KFC layers cheese on gravy on starch upon starch and tops it off with some chicken that is half its weight in deep fried chemical laden breading. 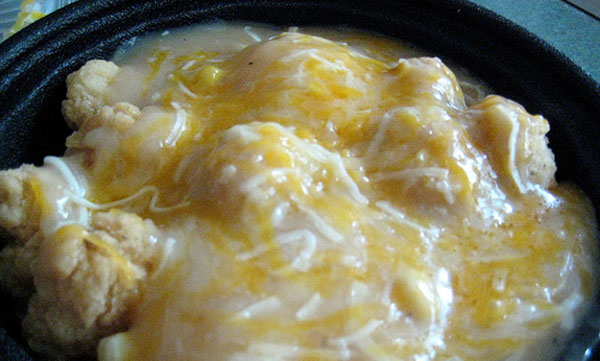 The best part? It can all be shoveled in with a plastic spoon. No time need be lost manually cutting one piece from another, and you can forget about all that pesky chewing – the only part you’ll need teeth for is the chicken, the rest can literally be sucked down. Mmmm-mmmmm! 720 calories of nearly drinkable goodness!

If you want to get freaked out about fast food, look no further than the McRib. Food Facts will tell you more than you ever wanted to know about something you probably should never have put in your mouth. We know it’s not the first time, but in this case, there’s documentation. “Boneless pork” is the primary ingredient in the McRib sandwich patty – a “boneless pork” sandwich meant to look like ribs in much the same way a Fisher Price hamburger looks like a hamburger. 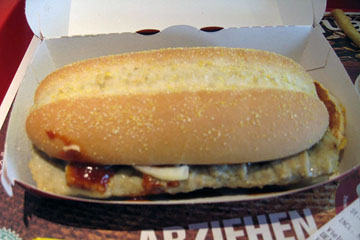 Photo: jluster Drink in the plastic pallor of the “meat”.

This substance sounds edible, but remember that cartilage is not bone, nor are anuses, lips, intestines or eyeballs. In this case “boneless pork” could be just about anything from the pig with no bone. Food facts shows the inside of one of these babies and the texture of the gray “meat” close up showing its particle board texture beneath a blistery surface of “skin”. At 490 calories, I have seen dogs turn their nose up at a piece of McRib.

McDonalds takes it off the menu and then puts it back on promoting its availability much in the same way the Rolling Stones promote their geriatric selves – “It’s back.” I guess we’ve all forgotten the hauntingly similar catchphrase from Poltergeist II. 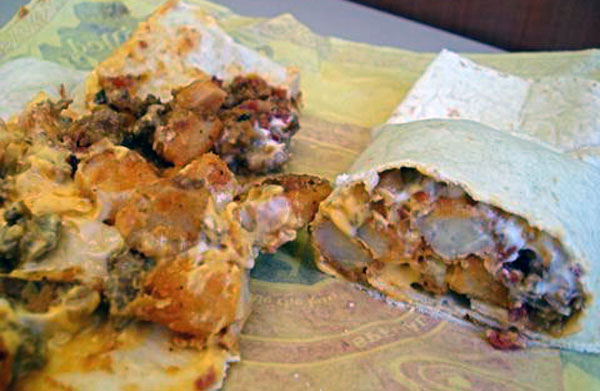 Much like a “Bowl” from KFC, this half-pound item from Taco Bell does not require any silverware. Simply slurp down deep fried potatoes with the Bell’s signature seasoned colonic spasm initiator (ground beef), nacho “cheese”, and reduced fat sour cream. It’s important when inhaling half a pound (510 calories or 680, depending on your source) of non-nutrients that the sour cream be reduced fat.

I’m not sure that I need to say any more. I think this photo from Grub Grade speaks volumes.

You can thank White Castle for this absolutely appalling name for a sandwich. Apparently the launch of this product was unfortunately timed, coinciding with a major outbreak of the swine flu and I am unable to find any evidence of its current availability. This probably foreshadows a re-release in the style of McRib. 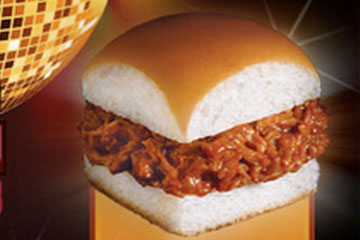 The slogan for this aptly named “sandwich”?
Sweet. Saucy. Oh so naughty.
Um. I wasn’t planning on having intercourse with it.

Witness the wormlike texture of the pork. It kind of makes you wonder what it was pulled from, doesn’t it? If this is the approved propaganda, we can only imagine the heinousness that the real sandwich would be. Worse than anything a grim, hairnet wearing school lunch lady could unceremoniously ladle onto your tray for sloppy joe day with a wet plop, imagine yourself gleefully and drunkenly devouring these in your car by the dozen and keep your fingers crossed that their return is nigh.

How do you make one of mankind’s greasiest and least healthy foods less healthy than it already is? Form it into balls and deep-fry it, coat it with sugar and serve it with frosting. What evil empire could devise such a horrible and unhealthy food? Hardee’s. Just when you thought that biscuits and sausage gravy were the pinnacle of non-nutritive breakfast foods, Hardee’s launches an ad campaign to grab your attention.

How many times can you hear “a hole” and not look at the TV?

While you may actually be eating “a holes” when you’re dining on a McRib, Hardee’s wants you thinking of “a holes” while you dip your balls into white cream that you bought in a six-pack. In this way, the homoeroticism of eating cream covered “a holes” shaped like balls can be brought back to the heartland in a non-threatening way. How many orders do you think Larry Craig has swallowed? Way to go, Hardee’s.