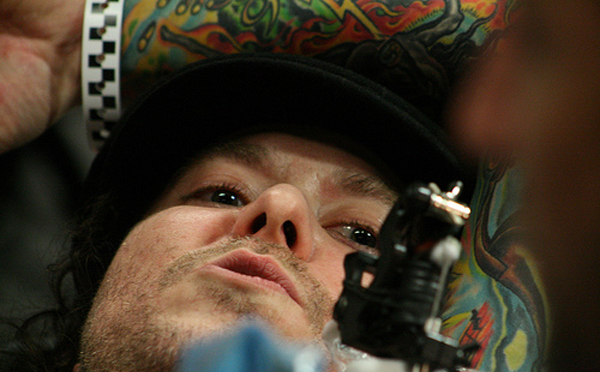 Tattooists with skills can travel the world from convention to convention, disseminating their styles far and wide.

Not lucky enough to be among them? You can always do the next best thing and visit a convention near you that gathers bright talents from around the globe. 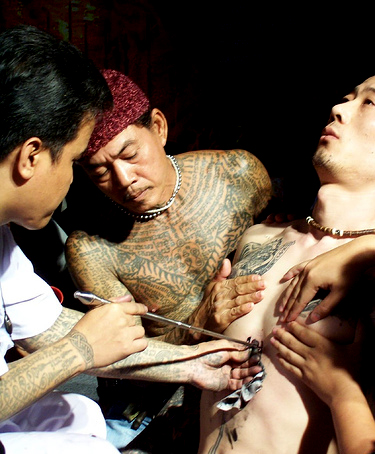 This year will be the first Bangkok International Tattoo Convention where you can see Arjan Noo Kanphai at work whose traditionally done Thai tattoos are renowned for their magic. Other artists who will be there include Mick Zurich, Shige, Horitsuna (who specializes in Tebori – traditional Japanese hand tattooing), and Mike Ledger.

Another tempting pick for the month of January is The Singapore Tat2 Show from the 8th through the 10th.

Our pick for February is the Third Annual MusInk Tattoo Convention and Music Festival in no small part due to the musical lineup which includes The Buzzcocks and The Damned. If you buy a three day pass for $75.00, you can also see NOFX and The Cult along with Jim Rose. Their listing of tattoo artists includes Mick Zurich and Hori Sho of Tokyo and mostly Californian artists and shops including Juan Puente of Black Rose. 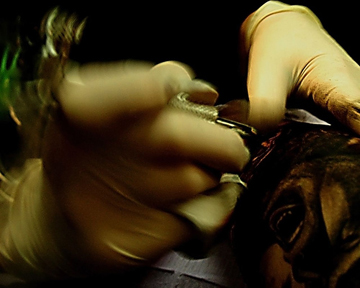 Featured Artist this year at Edmonton Ink Festival is Tattoo Jake who’s been tattooing across Canada since the ’80’s and offers a history of tattooing on his website along with problematic and unsafe practices he’s seen on tattoo TV shows.

Other artists will be listed on the site soon, but past conventions featured a roller derby, a graffiti wall and special guest Lizardman Erik Sprague and his stand-up routine.

A list of artists from all over Europe and the world can be found on the International Needle Art Convention website including Tattoo Jan Studio, and Carl Cooke’s Artful Ink of the UK. The lineup is not complete this far out, but you can see last year’s at the website to get an idea.

Tattoo Fest 2010 lists Victor Portugal of Kraków, Jef from Boucherie Moderne in Belgium and Guil Zekri of Germany and “many more” as artists whose trust they’ve gained. Does that mean they’ll be there in 2010? Check the website in the coming months for more information. 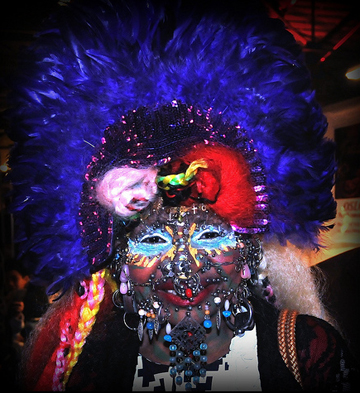 The 6th International Tattoo Convention kicks off in Stavanger, Norway at the end of July. If you’re not impressed with the no frills website, just look at the spectacles beheld at the 2009 event by scrolling down and clicking “Pictures 2009.”

2010 will include Sid and Noi Saimese, both formerly of Thailand, Vatea of Haiti, a bevy of Norwegian artists and many European artists.

Last year, Isobel Varley, the “Most Tattoed Senior Woman” according to the Guinness Book of World Records appeared along with Eliane Davidson, the world’s most pierced woman.

The lineup for Hell City is nowhere near complete yet. The four artists confirmed for the Phoenix Show are all from Clic Collective in Virginia, while their Columbus, Ohio show in May is far closer to hammered out.

The website states they are not an average tattoo convention which must be true when they offer a children’s area (Heck City Kid’s Zone). They promise “everything from live entertainment on the main stage, to music, to free seminars, live forums, The Art Fusion Experiment, tattoo competitions every day,” and of course, the ubiquitous Suicide Girls. 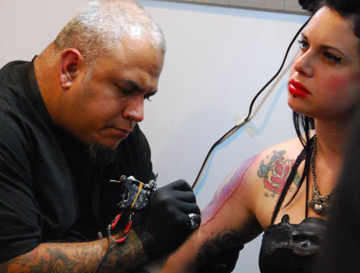 A shot from the London Convention: beerandnoodles

We’ve talked about The London Tattoo Convention on Matador Nights before. Details are few and far between for the 2010 lineup, but as the time draws near, buzz should get going in the forum.

In the meantime, you can peruse last year’s artists and events to get a good idea of what will be in store for you should you make it in 2010.

The Barcelona Tattoo Expo will be in its 13th year on 2010. In 2009 the convention had more then 9,000 visitors and 134 exhibitors. While there is little information about this event, you can subscribe to their newsletter for updates. 2009’s schedule was chock full of activities. 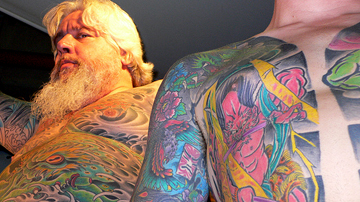 If the past two years are any indication, Florence will hold its third tattoo convention this November. Last year featured loads of Italian artists including transplant Don Alejandro Cervantes of Tattoo Mexican Family and his clan, and photo-realists Matteo Cascetti and Tiziano Ripanti of Il Gatto e la Volpe. Many European artists and several Japanese artists including including Hiro, Horinao and Ritsu from Cat Claw Studio were on the roster last year as well as a couple of Americans and one Brazilian.

It’s pretty certain that December will see the 20th Berlin Tattoo Convention. Only just completed, 2009’s event included Herbert Hoffman, billed as the oldest tattoo artist. Last year, Vatea tattooed in the real old school fashion – without a machine, and 150 artists worked and were showcased from locales as far-flung as China.

Looking for more conventions? Check out Karen L. Hudson‘s guide on About.com as it’s updated throughout the year to see if you’ll be near one in 2010.

This list brings you one tattoo convention a month worldwide and picks are partially based on date, so many greats have been excluded from the list. Is there something you’d like to see here? We invite your comments letting us know below.

Check out MatadorTV to see Thai monks tattooing in the traditional way and the tattooed taking on the attributes of the tattoos they’ve gotten.

Torn about being tattooed? You can read Matador Community member kburg’s blog about what a tattoo can mean for your employment in Korea.

Tagged
Entertainment Events
What did you think of this story?
Meh
Good
Awesome

The 8 best movies and shows to watch before going to Paris
The 50 greatest campfire songs of all time
Why does ‘yellow filter’ keep popping up in American movies?
The 25 coolest towns in America to visit in 2021
The 10 most progressive cities in the US

A freaky Stranger Things drive-thru experience is coming this October

Tokyo Olympic Games will happen in 2021 ‘with or without COVID,’ says committee