View all travel news
Top Destinations
Top CitiesView All Destinations
Trending Regions
Trending Cities
Load More
Berlin has more quick and cheap food than almost any other city in the world. We sent Tom Gates out with an empty belly and asked him to eat as much as he could in one day. It turns out that the man can eat a lot. 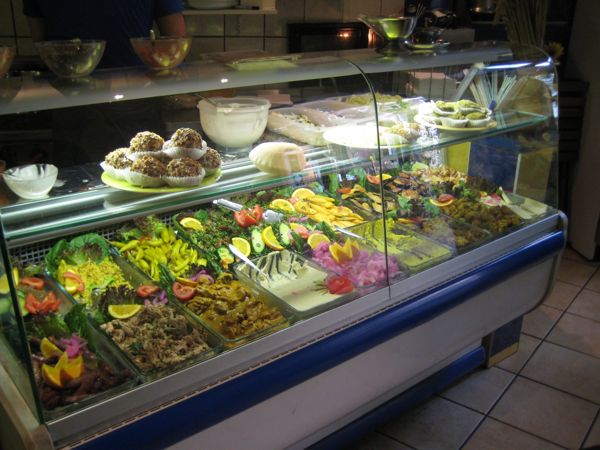 The reason there is no picture of a falafel here is because I whoofed it in thirteen seconds. Located in the Turkish section of Kreuzberg, Zad makes some of the best food in town. Every item in the display is made fresh each morning and only served after it’s been blessed. Blessed food is still scarfed food. 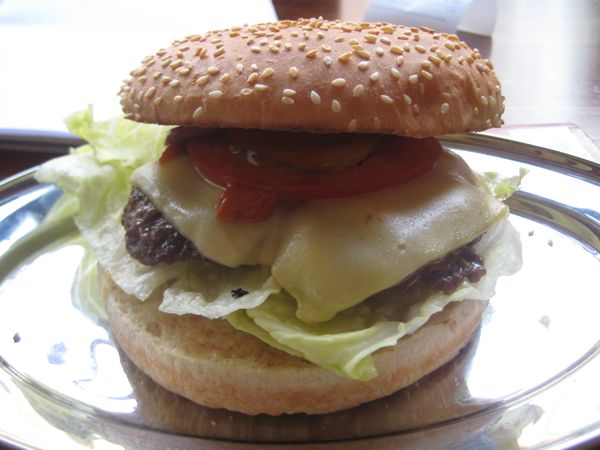 Kreuzburger is where the locals go to beef up. I wasted no time in ordering cheeseburger, which was exactly the size of my fist. Toasted bun, slightly spicy burger sauce, loads of pickles, white cheddar, lettuce and tomato. As close to perfection as you can get in Europe (c’mon, we all know there’s no meat in your meat). 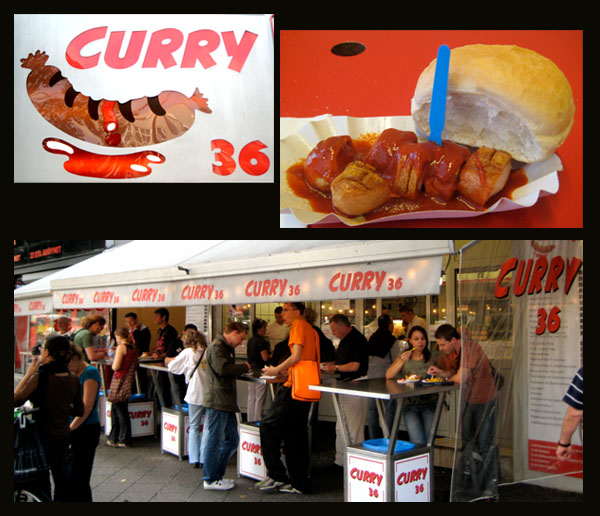 No foodie tour of Berlin would be complete without a round of currywurst at Curry 36, the most famous wurst stop in town. For the uninitiated, the dish in question looks like an oversized hotdog that’s been dressed in curry ketchup, with a warm bun on the side.

Lines often go around the block but I was lucky, hitting some magical hour where only a few of us whoofed the best wurst. Everyone from bankers to cabbies stood around me, wolfing down some of the best mystery meat ever put to paper plate. I wasn’t the only one who licked mine clean.

Impression: Worth the hype. Mood: Gurgly. 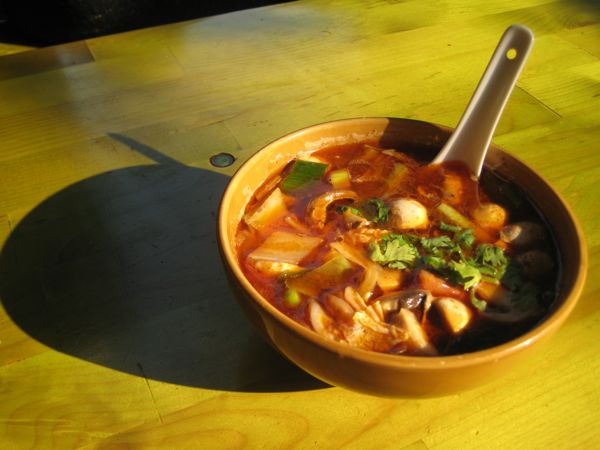 Berlin is gaga for Thai and so am I. Pagode does it better than any restaurant I’ve been to outside of Thailand, probably because they fly ingredients in twice-weekly from Southeast Asia. Four irritated women whiz through dozens of orders in minutes, barking pickups through a PA system that projects towards the curbside picnic tables.

I’ve went for the Tom Yam Gai, a particularly risky post-currywurst choice. I felt my insides begging for mercy as I ladled big spoonfuls of the spicy soup into my gullet. If you ever find yourself in Berlin, point yourself to this place. It’s incredible.

Impression: It doesn’t get any finer. Mood: Potty? 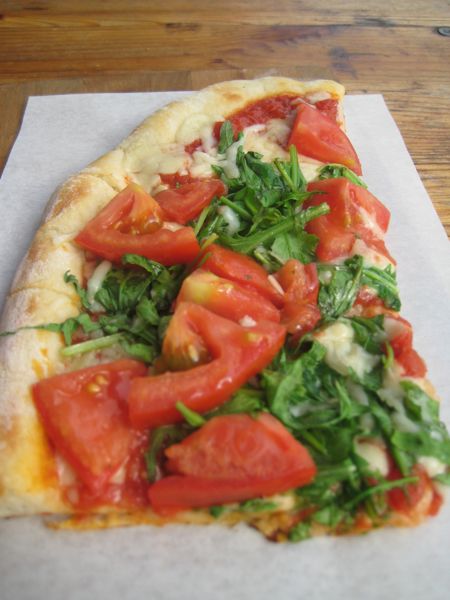 Berlin is filled with these little storefront pizza joints, all displaying massive pizzas that are difficult to walk past without a second or third glance. They’re all pretty much the same and are all frigging delicious.

Knowing that I had to pace myself, I skipped the spicier options (Spicy Potato, Salami) and opted for a Rucola slice – a margherita topped with shaved parmesan, tomatos and rocket leaves. One piece is enough to fill most anyone.

Impression: On the money. Mood: Burpy 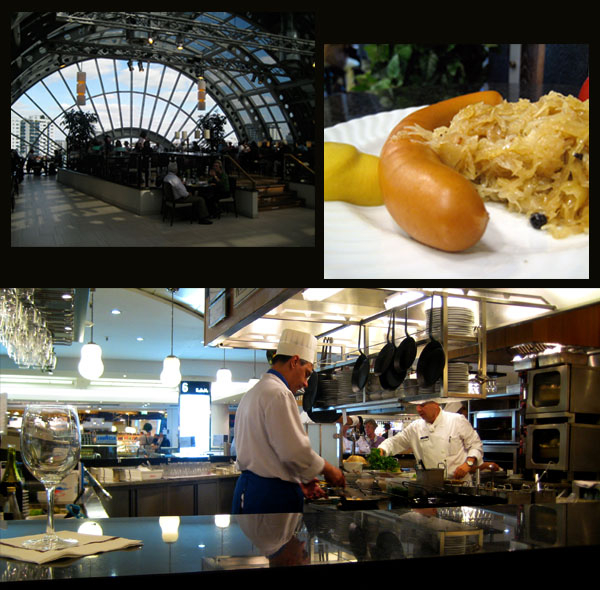 Kadewe’s sixth floor is the most delicious place on earth. This massive food hall is set up so that each counter also serves as a restaurant, where a chef can make most anything that’s in the display case. There’s food from all over the world, including an “American Section” that stocks something for every craving, from Bisquick to Thousand Island to Pop Tarts.

I opted for something German, hitting a booth that sold ten different kinds of Wurst. Dude handed me a plate with a massive sausage, homemade saurkraut and a big dollop of mustard. I wasn’t particularly hungry but I ate it all.

Impression: Pricey but unique. Mood: Broke and ready to barf. 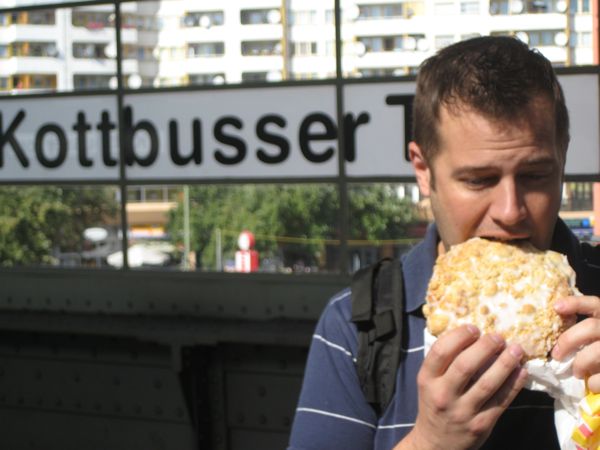 As bloated as I was, I took one for the team and grabbed a pastry-y thing on the way home. Most U-Bahn stations are good for fast food, some of them containing dozens of shops and stores. I was only able to choke down a few bites of this tasty treat. 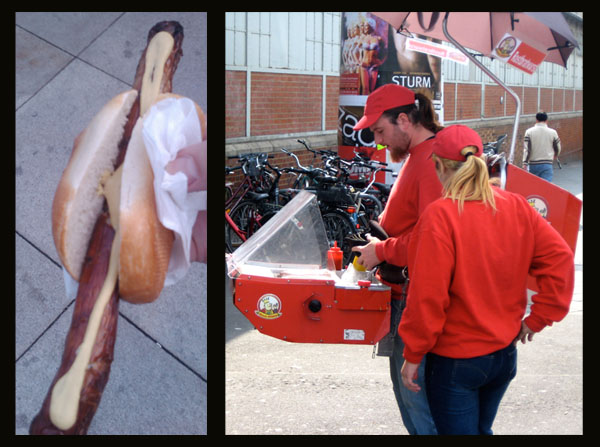 Unwise. But how often are you going to run into a man with a full hot dog setup resting on his hips? These guys (and girls) make the rounds outside of U-Bahn stations and sport a full grill contraption, ready to serve dogs that are so big they won’t fit in a roll. Two bites later, I called it a day.

Not full? Be sure to check Tom’s binge in Bangkok. Feel free to also indulge your inner foodie by eyeballing Anatomy of a Smörgåsbord and Matador Nights’ ongoing obsession with carbonated beverages.